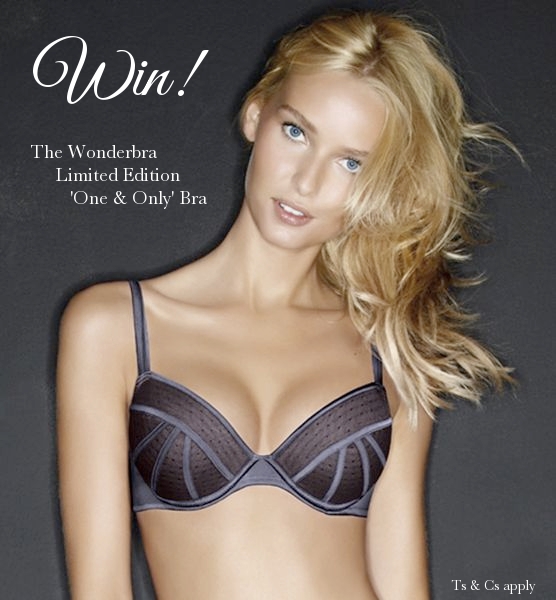 Wonderbra Limited Edition ‘One & Only’ Bra

If you read my earlier post WIN a Wonderbra with National Cleavage Day, you’ll know by now that I’m, you guessed it, an official ambassador for Wonderbra‘s very own National Cleavage Day towards the end of this month.  You’ll also have noted that I’m giving away a Wonderbra to one lucky winner.  I was asked to select my favourite bra out of the entire Wonderbra range to offer as the prize and the decision was so difficult.  There are so many sexy and cool designs that Wonderbra do, even in the larger cups, that I was spoilt for choice.  Needless to say, I made the pick and chose the ‘One & Only‘ bra from the Limited Edition collection.  As with all limited ranges though, there’s usually only a select number made, so you may, depending on the size you request, be sent an alternative colour or style.  If you haven’t get entered the giveaway, you can check out the Rafflecopter here. The Wonderbra Girls wanted to send me the One & Only for myself to wear and as the cups are available up to a G I asked for a 32G. The Wonderbras I’m most familiar with are typically lace or satin (okay, there was a dubious sparkly one in the noughties but we won’t go there) so it’s pleasantly different to try out a totally new fabric design.  The One & Only is predominantly a spot mesh trimmed with narrow ribbons of satin.  Although it is a glamorous, sumptuous collection I can’t help but think it has a kinkier edge with echoes of bondage strapping.  This collection surely has to be the naughty sister of the more normal Wonderbras: the fetish inspired Wonderbras. The larger cups of the One & Only don’t boast the same amount of padding as those under a D cup but I wouldn’t want it to.  The cups are still more than adequately padded to provide a smooth shape without size enhancement.  The low and close central gore creates an effective cleavage with an exceptionally rounded shape.  The look is boosted and ample but remains in the natural, effortless territory.
I did find the band was a lot longer than I’d have preferred.  For a more close fitting it is best to use the first (loosest) hook and eye but I needed to use the last.  The 30 back would have been a better option.  The wings have a very slight plastic boning and then the band is a minimalist design, featuring only elastic strips which extend to the closure. The straps are semi adjustable elastic with front satin and a mesh trim which is pretty different.  The adjusters and rings are metal which look and feel more quality than regular plastic furnishings. The One & Only has both met and surpassed my expectations.  The design and build is solid and substantial which is an important factor in large cup bras and it looks sexy and feminine too.  If I could change one thing about this bra it would be the band.  I don’t think it’s appeal depends on the narrow quirky band and it would be a good firm foundation if the band was deeper and more rigid.
I’ve seen that you can also get the One & Only in a cream shade which looks pretty in a wearable neutral colour.
Which has been your favourite Wonderbra over the years?
Becky x