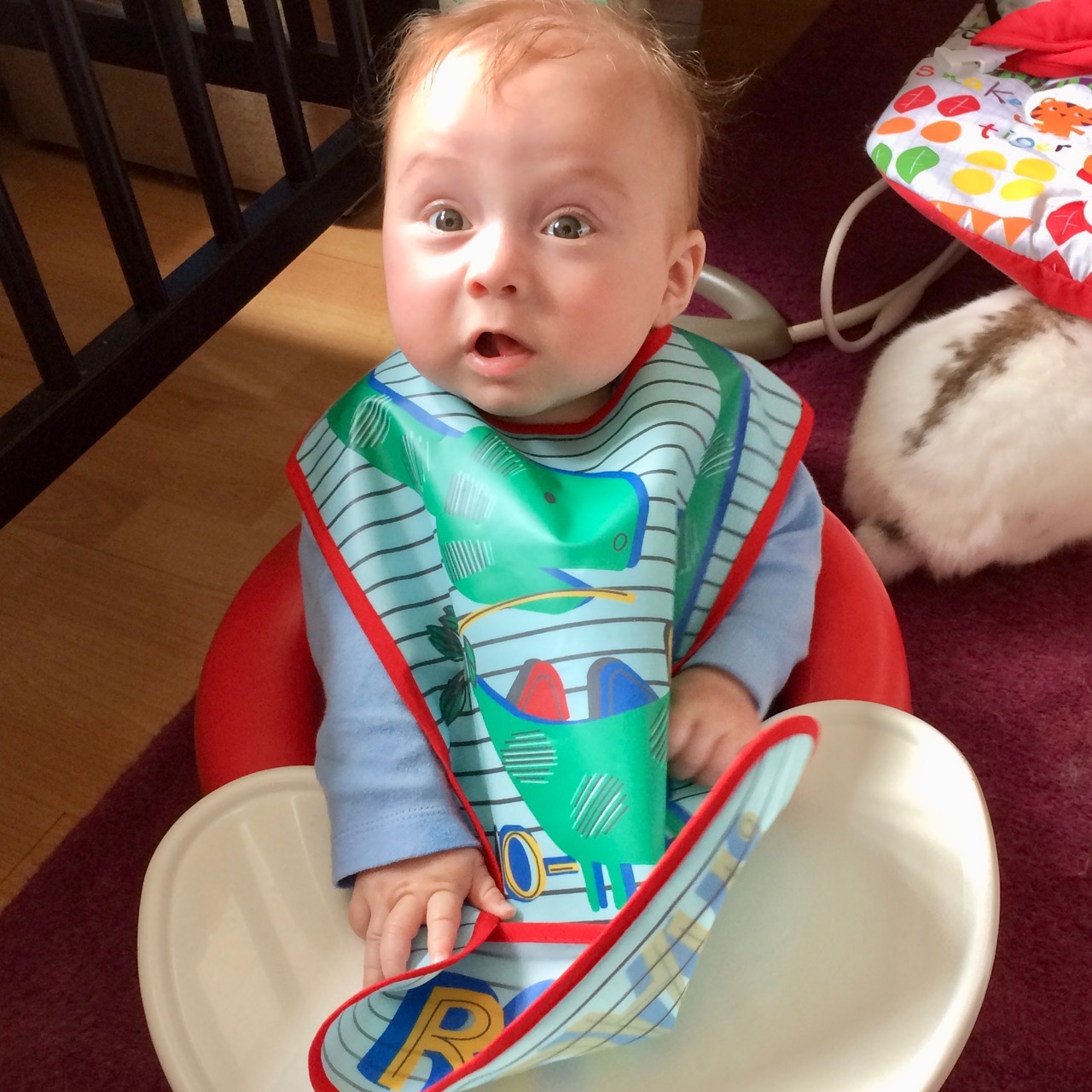 Someone once said to me that your baby will decide when they’re ready to do something.  At the time I thought, how does that even work?  We’re given all these guidelines and advice telling us when to do this and how we should hold off from doing that, it’s wonder half the time knowing you’re ever doing the right thing by your baby. We decided from the outset that Reuben would be waiting the recommended 6 months before starting weaning.  Certain we wanted to minimise, even avoid, the risk of diseases and allergies, with an under developed digestive system being my biggest concern, we figured the government’s guidelines were a good signpost to stick by.  We really stuck to our guns, even more steadfast in light of the numerous nudges by family and friends who’d jokingly remark on Reuben’s desire for ‘a bit of mash and gravy’ or whatever else was on the dinner table.  We were straight up: nothing but milk would be touching the lips of this little one.

But approaching his fifth month, Reuben’s appetite started to change.  One week he suddenly hungered for more milk, devouring over a litre of formula milk a day, the next he was drinking sporadically, disinterested in his liquid lunch and struggling to drink 500ml.  We took this as a sign he was ready for actual food, that he was hungry for more and bored of the bottle, so we wondered if this was Reuben’s way of saying “ay up, I want grub!”

However a phonecall to our health visitor let out the air of that balloon; apparently a lesser milk intake can be a result from teething, something we were certain little Reubs was beginning to go through.  Anyway, as much as that were true, it doesn’t really explain the increase in milk, and Reuben’s interest in whatever we’re eating (including trying to grab it) is inarguably food curiosity.

So last week Reuben started his journey on the road to solids.  We’re not going to rush it – with a gradual introduction to a variety of fruit, veggies and cereal on a daily basis, we’ve decided a predominant baby led weaning method is the route we’re going to follow; letting Reuben experience the texture and taste of foods in their natural form, with some lumpy mash to mix it up!

The first foray into solids was a spur of the moment tasting session as I was sitting with Reuben on my lap with an Innocent Smoothie in hand.  Ironically it was a kids’ drink pouch and since its ingredients were all natural fruit based (mmm, peaches and passion fruits), it was an exciting three sips on Reuben’s part.  I had to pour it out into a glass first but he was quite capable of taking mouthfuls from the cup rim. Day 2 took a more adventurous step, this time seeing Reuben try two new foods in one day.  Whilst out shopping the day before we came across a Cow and Gate porridge that we thought we’d try.  It was simple to make up although a little odd, directing quite specifically to mix 2.5 heaped tablespoons with 73ml cooled boiled water.  (Sorry, 2.5 tablespoons?!  73ml?!)  Anyway, the texture was very smooth but within a few minutes thickened up, which I thought made it more appealing.  Reuben wasn’t so interested, pushing it out of his mouth and pulling some unimpressed faces.  I’ll try it again another day.

Later on in the day we got Reuben kitted out with his big plastic bib again and this time gave him a bit more control over what went in his mouth.  I broke off about a third of a banana and handed it to him.  Sometimes on his own, occasionally with Daddy’s help, he put his fists around that banana and  went for it!  Lots of intriguing licking and attempts to put the whole thing in his mouth in one go, Reuben seemed really engaged in the baby led activity. Baby on the Go

On day 3 we were out and about in the car so we didn’t do a big foodie session at home.  Instead he got to try a bit of my lunch on the go.  I had a chicken and bacon pasta salad that had thick slices of roast chicken on top; Reuben was supposed to be having his milk but he was distracted by what I was eating, so I had a think about whether it was safe to let him try it.  The chicken wasn’t mixed in with or touching the rest of the ingredients so I took a chunky slice and gave it to Daddy to supervise.  You could tell Reuben wasn’t sure about the texture; while it was a moist meat it was still dry in comparison to the mushy banana and porridge he’d earlier tried.  But he did swallow some little bits that he’d managed to soften, so that was still a score. On the fourth day we brought out the long favoured teething foodie, Farley’s Rusks!  I remember my little brother chewing on rusks, and I would have done the same, back in the 80s.   It says on the box that the versatile biscuit can be softened with infant milk to create a smooth cereal to be eaten on its own or mixed with fruit for a dessert, or given as it is for an easy to handle snack.  Reuben clearly enjoyed his rusk, delighting in slobbering it to bits and crumbling it all over himself and Daddy.

In the evening we visited our friends who’d laid on a table of nibbles, lots of no-go crisps and dips but a variety of veggie sticks that were perfect for Reuben to join in with the adults.  So the little man got to try celery and a red pepper which he found very intriguing. Over the weekend we continued to offer Reuben a variety of easy to handle snacks in between his milk.  Today he was the most adventurous ever with three foodie sessions – orange porridge, a piece of soft white bread bun and some banana, all in one day.  While the banana is a certain big hit, it’s up for debate whether Reuben doesn’t like the taste of his porridge or if it’s being fed that he takes a disliking to!

It’s proving a challenge to think of what to offer Reuben next but it’s exciting; I love watching him try something for the first time in his life and it’s hilarious to see him covered in the smallest bit of food.  It’s a good excuse for a follow up fun bath too which is never a bad thing in Reuben’s book.

While Reuben had his monthly weigh in today we took the opportunity to speak with one of the health visitors about our move onto weaning.  We were reminded that 6 months is still the recommended age to begin weaning, but said not many people do wait that long.  We have been advised to continue taking it slow, ideally only introducing a new food each week, to give Reuben’s body the chance to show any adverse effects should he have any intolerance or allergy to a certain food.

Have you started weaning your baby yet?  Are you going to wait the full 6 months or get going earlier?  What are your thoughts on feeding baby puree foods versus baby led weaning?  I’d love to hear about your babies in the comments below.