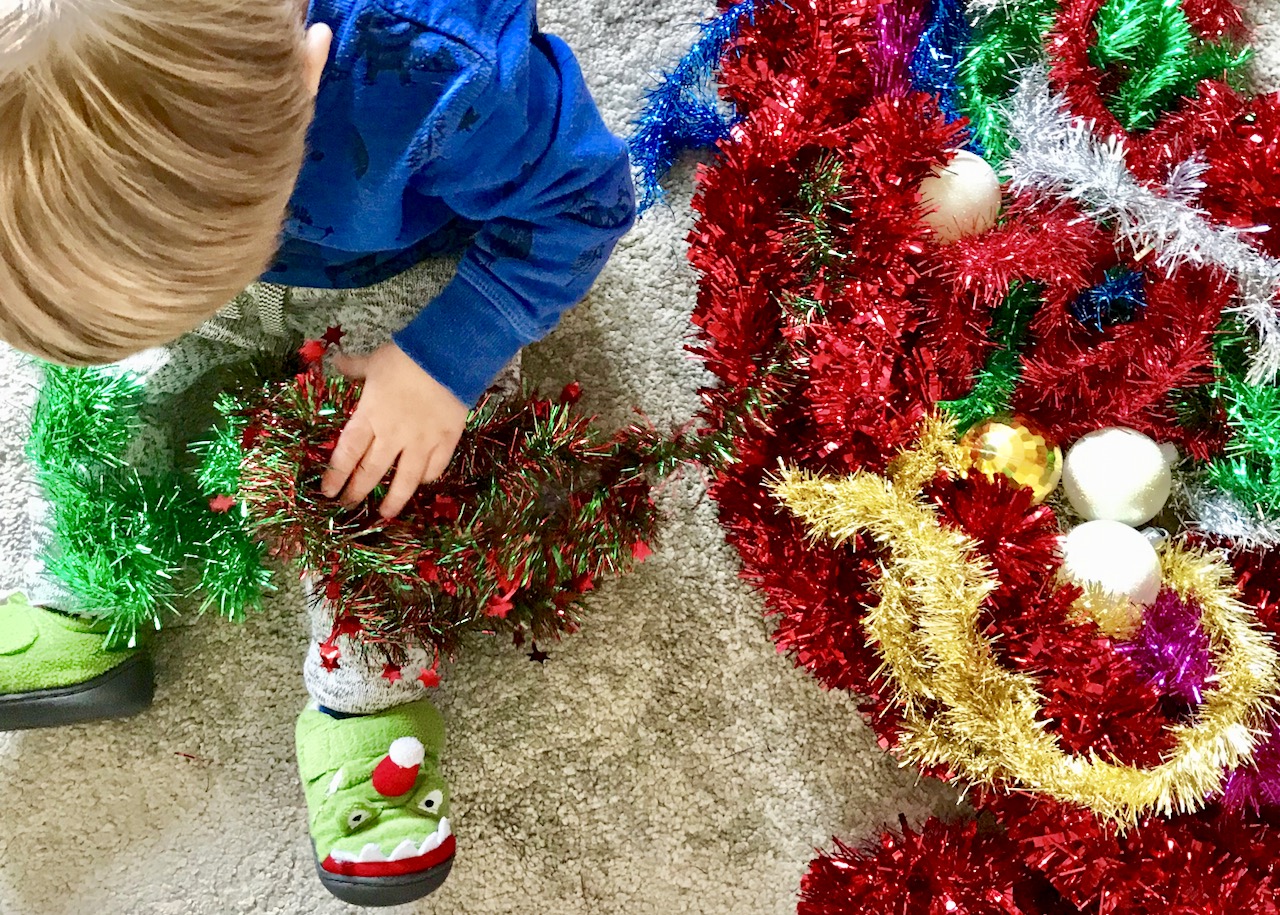 Last Christmas was our first as a family. It was a big deal. Being a huge Christmas fan, it was the one time of year I was most looking forward to seeing Reuben experience – and it was as magical as I’d hoped.

Last Christmas we started some familiar traditions such as visiting Santa and opening an advent calendar, and had fun introducing Reuben to Christmas lights, the nativity and opening presents – including his very own stocking.

However, oddly enough, despite last year being Reuben’s special first Christmas, this year I feel like I’m even more excited for his second.

Reuben has done so much growing up since last Christmas. He’s learnt to walk (and run!), hatched a mouthful of teeth and developed his own vocabulary, all the while discovering the world around him. At 21/22 months old, he’ll mentally understand more, be physically able to engage more and ultimately be able to experience more, meaning only one thing: he’s gonna get so much more out of Christmas! Family friendly classics such as The Snowman and Home Alone are must-see Christmas movies so I’m excited to cuddle up on the sofa with Reuben and introduce him to favourites we grew up with. Reuben loves his telly so he’ll likely be up for this activity. He also loves trains so he’ll ‘bust his buffers’ when he sees the Polar Express!  Edit: we watched it.  He was marginally impressed.

This Christmas Reuben can properly dance! He loves a little boogie so it’ll be fun getting the festive tunes playing. I put Sia’s Christmas album on the other day, much to Reuben’s amusement as he may remember it from last year, so it’s safe to say anything silly with a beat like all good cheesy Christmas tunes do, he’s gonna love it. Driving around the estates looking at decorated houses is something we’ve never done before but, having heard other families doing this, I thought it sounded fun. Then there’s the local Christmas Lights Switch On where the town tree is officially illuminated. Reuben loves lights so this could be a lovely experience for him.

4. Being excited about presents

Reuben loves helping to open parcels from the post man. Christmas presents should be more inviting thanks to their bright wrapping paper, which I have no doubt he’ll relish ripping open. Last year it felt like we blindly bought toys just because they were ‘good for a baby’, so now he’s old enough to have interests, it’ll be good giving gifts that he’ll actually be interested in too.

5. Hanging up his stocking

This has to be probably the most thrilling part to Christmas – hanging your empty stocking at the foot of the bed or door knob ready for Santa’s midnight visit. While he may not yet fully understand why he’s doing it, I love that Reuben will be capable of hanging it up himself. 6. Meeting Santa – and knowing who he is

Reuben visited Santa’s grotto last year and it was an emotional experience – he was too overwhelmed to cry! This year I’ve been making a point of often showing him who Santa is and what he looks like, so now when I ask him where Santa is he confidently shows me. So hopefully Reuben will recognise him when we go for the annual visit. Though my only concern now is avoiding a tantrum.

I know he’s still only little but I’m looking forward to baking some festive treats with Reuben. He already has his own apron and mini baking tools since we’ve made gingerbread biscuits together before. This was a tradition for my family where we kids would ‘help’ mum with the Christmas baking, so it’ll be lovely to do this with my own family.

8. Sending a letter to Santa

To be honest, I think this activity may still be a little premature. Last year we posted Prince George a Christmas card for something different but it would be nice to write to Santa this year.  While Reuben won’t be able to physically write a letter to Santa, it may still be nice to show him the way by writing it out for him to decorate. Traditionally I grew up sending my letters to Santa up the chimney but since we don’t have a real fire, it’ll have to be a Royal Mail job. Last year we bought a dress up nativity star outfit and stuck it on Reuben for a laugh. The other day he found the outfit and brought it over to me to put on him! It seems I may not have a fight on to dress him in silly costumes or make him look adorably cute in Christmas jumpers.

10. Giving a present to daddy

This could possibly be the cutest thing Reuben could do this Christmas: give daddy a Christmas present with his own two hands. Obviously I’ll have to do the buying and the wrapping, but it’ll be a lovely way for Reuben to play his part in our family Christmas.

Putting anxieties aside (if only it were that easy), I’m looking forward to enjoying some Christmassy family events.  We’re planning on returning to Beamish to experience a Victorian Christmas which I’m sure Reuben will enjoy, and I love a good Christmas market – whether it’s the place to take a toddler I don’t know – but we’ll definitely go to one for proper festive feels.

Reuben just might eat the traditional apple at the bottom of his stocking! Unlike my child self who put my apple and satsuma back in the fruit bowl, wondering… what was that all about, Santa?! Hopefully Reuben won’t be as ungrateful! Will you be celebrating your baby’s first Christmas this year?  Perhaps it’s your child’s second, third or fourth?  What are you most looking forward to this Christmas?