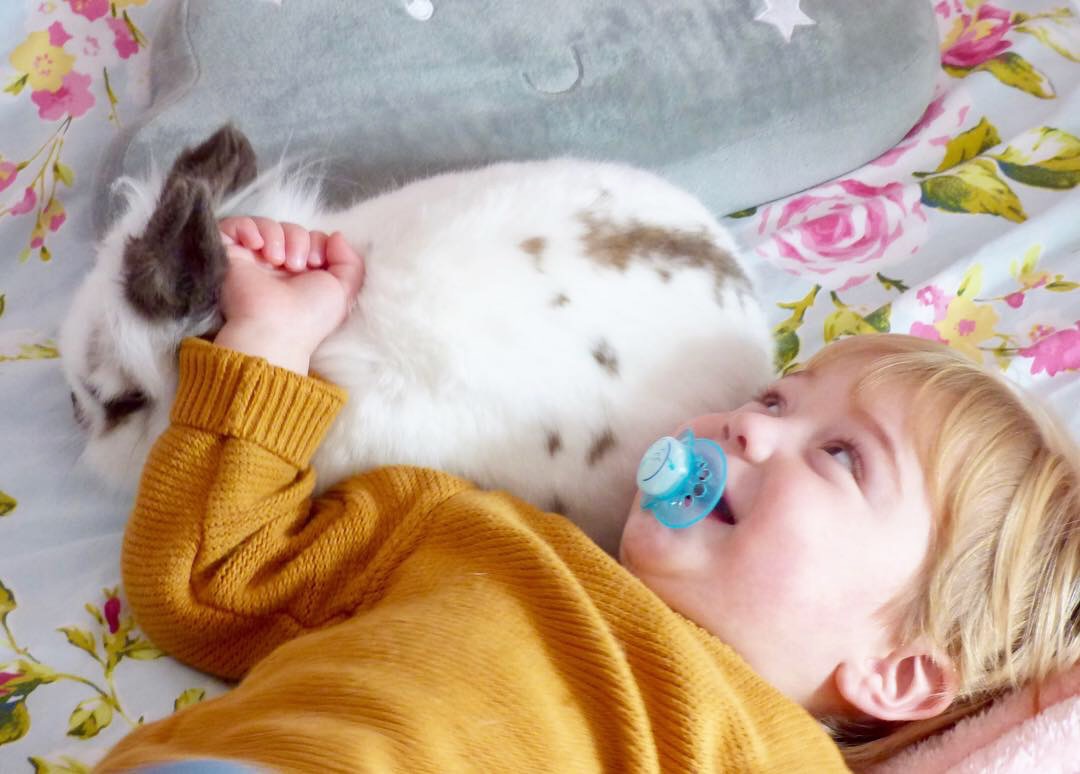 The Day Our Rabbit Died: A Toddler’s First Long Goodbye

A few weeks ago, Reuben’s first friend in the world, died: our rabbit, Danny. It was the day I always dreaded arriving and as expected it broke my heart – not least because Danny was my little guy too, but because Reuben wouldn’t understand his goodbye meant forever.

Danny took risks – darting out of the front door and unwittingly getting locked out for hours – and as much as he drove us nuts destroying cables, carpet and all manner of toys and books, he stole our hearts.

Because of Danny’s care-free lifestyle, it meant he was everywhere. When we were home, he’d be right there. Rabbits are sociable animals and for the most part of his life (til he finally bonded to his lady bun, Freya) he lived by himself. Solitary, but not alone.

To many, he may have been ‘just a rabbit’ but he was a member of the family. Danny was one of us.

Now wherever I go, walking through the front door, into the living room, into the kitchen, there’s no blur of a white furry body darting away. No whiskers and beady black eyes peering round a door, no snowy fluff on the carpet.

He’s not there and it’s weird.

When Reuben was born, we didn’t leave hospital right away. He was four days old when we came home, back to what would be Reuben’s normal life, with a rabbit waiting for us, on the living room floor.

Reuben and Danny’s first meeting was fleeting, since the first full day we were home, Reuben was rushed back into hospital for a week. But just as it was that Saturday afternoon, when we held a tiny Reuben down for Danny to sniff, he was just as inquisitive when we were home for good. While the newborn baby crying was an odd sound to figure out, he knew this small human wasn’t someone to be afraid of.

All of a sudden, interesting objects would appear on ‘Danny’s floor’. Stacking hoops, bouncy chairs and play mats with dangly bits that jingled and crinkled. Danny was intrigued. And before we knew it, Reuben was intrigued by him too; wide eyes on Danny, pulling himself over to Danny, crawling to Danny, running to Danny. They became the best buds a toddler and rabbit could be and Reuben delighted in having his “Dan Dan” around him.

Danny was never a ‘cuddler’. Like most rabbits, he didn’t like you trying to pick him up. Reuben would attempt to reach out to Danny in the hope of getting a cuddle, but he soon realised it was never going to happen. But Danny did love attention – there was a difference – stroking was always welcome, as was the offer of a treat or the knowing Reuben had cereal or fruit in the vicinity to beg or steal from.

Then came the day I noticed Danny wasn’t right, and as instinct has proven before, I knew it was bad. And just as I’d dreaded, we were to say goodbye.

Taking a poorly Danny out in his carry box, securing him in beside the car seat, Reuben thought it was great. Going to the vets was something new and exciting, and while we were deciding between letting Danny suffer through an operation he’d never recover from or passing over the rainbow bridge, Reuben was occupied by the thrill of the clinic. He had no idea this exciting trip was a truly bad day.

So how do you tell a child – a toddler, of not even three – that someone they’ve known since the beginning won’t be around forever?

Thankfully, Reuben is too young to understand death yet, so it’s pretty much matter of fact Danny’s not around now. At first, he would ask where Danny was; say he needed to get a treat for Dan Dan. It took reminding that Danny was gone now. “Remember, we said goodbye”, we’d say, bracing to catch the pain all over again.

Reuben has this little book called The Star Maker. It’s a Christmas book essentially, introducing little ones to Jesus and the first Christmas, and ever since we bought the book, Reuben’s asked to read it most nights. The day Danny died, we were cuddled together in bed, reading The Star Maker as usual, when it dawned on me this was the natural explanation.

I’d point to the pictures; illustrating a staircase from heaven to earth, which Jesus stepped down on that first Christmas. “This is where Danny is now – Danny’s with Jesus”, I’d say, pointing at the white cloud to the corner of the page. And I’d reassure him that we’ll see Danny again in the future, when we go to heaven too. Reuben would trace his finger down the stairs continuing what he’d recall from the night before “and we’re here on Earth”.

We’ve gone on like this as the days pass into weeks; Reuben – as soon as we’d turn the page, sometimes rushing straight to it – eager to tell me of Danny’s whereabouts.

Reuben surprised me one day. We were heading out to the car when Reuben pointed up to the sky exclaiming “Danny’s up there!” I’d never told him in that context, outside, before. It kinda hit me in a place that felt raw but at the same time, at peace.

Danny was my fur baby before we had a child and I loved him. I’ve loved all my animals, deeply. Often I’ve wondered, worried even, whether animals go to heaven or if it’s just a place for human souls, but I truly don’t believe that’s so. I think God gave us animals to care for and love because He loves them too. So why wouldn’t His perfect creation not have a place in our perfect heaven?

It’s not a nice thing, explaining the death of our rabbit to our toddler son, because he’s too young to understand it like we do. He gets it, he knows Danny isn’t here anymore. It is exactly what it is – simple and without emotion. But what breaks my heart most about it is thinking that Reuben will forget about Danny too.

I hope he doesn’t. I hope, when Reuben looks back at the photos we’ve taken of him as he’s grown up from a baby in my arms, laying on his play mat, crawling to his toys, running to find his Dan Dan, that there’ll be something there in the back of his mind. That he’ll remember the feel of his toes in Danny’s soft fur, that he’ll recall Danny’s gentle paws against his leg, the sound of his grumpy grunts which made Reuben laugh, and the games chasing Danny in from the garden.

These were Reuben’s earliest, most precious years, and he spent them blessed by the presence of a rabbit living his best life.

The wolf will live with the lamb, the leopard will lie down with the goat, the calf and the lion and the yearling together; and a little child will lead them. Isaiah 11:6