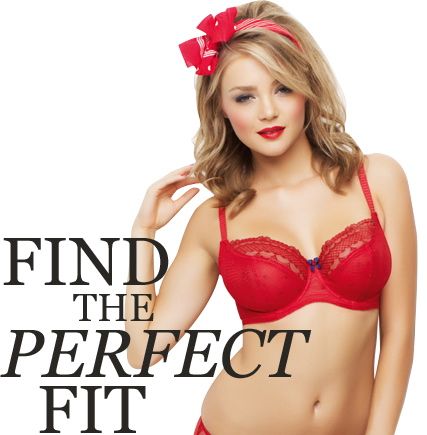 Panache are a god send to many D+ bra wearers.  With the Superbra, Cleo and Masquerade lingerie lines catering for varying tastes and budgets, not forgetting Panache Swimwear, it wouldn’t be uncommon for most busty girls to own at least one Panache brand bra.  Whether we’re wearing the best size for us is another matter, which is why, some three months ago, Panache launched the Bra Fit Challenge.

They designed some really cool posters for the challenge which I just fell in love with.  There’s a vintage loveliness about them in a modern sweetie coloured palette.  These were my favourites – Found on Panache’s Facebook page and website, The Bra Fit Challenge is a simple series of questions about how your current bras fit you to establish whether you’re wearing the right size.  Addressing issues such as a band which rides up at the back – which means your band size is too big and you need to downside – and other bra fit problems including straps that slide off, cups that bulge and under wires that dig in.  Before you find out what bra size Panache think you should be wearing you do need to provide your name and email address, which could be seen as a sneaky way of collecting people’s data, but I didn’t mind giving mine so long as it means I stay in the loop of the latest offers and releases!

I thought I would take the Bra Fit Challenge to see what size I would be told.  Having used some questionably dubious bra fitters elsewhere on the web I was expecting an equally funny response.  So it was pretty refreshing to see, following the good advice and pointers throughout the short survey, that the size I wear, a 28H, is my Panache recommended size.  Phew!

I had forgotten all about the challenge until recently when I received an email telling me I’d won a lingerie set from the competition!  Alongside the challenge ran a competition to win one of 50 lingerie sets and I had won one of them.  I’d been eagerly awaiting the arrival of my surprise parcel so it was exciting when my delivery landed just last week.

I had won a beautiful Masquerade bra and brief set called Persia which particularly made my day because I LOVE Masquerade bras.  Not only are they luxurious and well made but they always make me feel fantastic. The Persia is an exotic collection oozing Middle Eastern delight.  The new colour added for the winter season is this stunning sapphire blue, the perfect jewel for the festive period, fashioned in silky satin and fully embroidered cups.  The lace detailing runs up alongside the front of the straps with the same fine lace adorning the briefs.  Where bows are commonplace, tassels instead grace the centre gore and the top hem of the knickers. Whilst I adore Masquerade’s never failing quality and attention to detail, I’m sadly not disillusioned by the grandeur of Persia.  The full covering balcony style didn’t fit my boobs properly, it looked distorted, unfilled and unhappy on me.  Lifting, scooping and rearranging did nothing to improve the situation.  My boobs were having none of it.

And that was all once I’d managed to get it on.  Usually a 28H Masquerade fits me like a dream but I seriously struggled to fasten the band because it was so tight.  Laying it out next to my Masquerade Amira I found the Persia was a good centimetre shorter in the band.  Despite eventually hooking it up, it was far too restrictive to keep wearing.

I know plunging bras fit me best but there are many balconettes exception to the rule.  As long as the centre wires are close or the centre gore sits high enough then it’s no problem.  I’m undecided whether a higher set bust would fit into Persia better than me, or whether the strange cup design and small back is down to miscalculated design?

I’m hoping this is just another bra that doesn’t fit me well and that there’s still some fabulous beauties yet to come from Masquerade.

The Panache Bra Fit Challenge is back on for the run up to Christmas, so if you missed out last time you still have chance to bag a beautiful lingerie set in your very own size.  Get checking now!

Back to school today and I’m already kinda sad about him not being here. The holidays have been lovely, lots of time just chilling at home, watching tv, playing games and toys. And it’s just nice having him here in the house. Of course it can be hard work and I’ve felt guilty for us not getting out more but you can’t have it all. Reuben was excited for school this morning so as long as he’s happy!