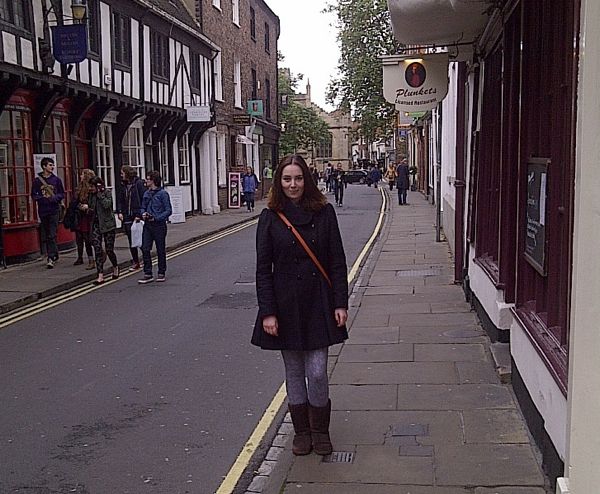 I finally went down to check out Leia Lingerie‘s only store in the North, right in the heart of York.  Having reviewed bras sent to me courtesy of Leia head office, I was really keen to look into the Leia experience from the consumer point of view.  After all, buying online is all very well but how does it compare to proper instore interaction where you look for professional advice, was a question I wanted to know.  Knowing here in the UK we have a serious lacking of good, reliable bra fitters in our high street shops, I was hopeful Leia would stand apart from the retailing competition.

Walking into the small but perfectly formed store was like stepping into a perfectly organised ladies room.  The walls boasted lit viewing displays of bras whilst on racks hung the prettiest of bras in various sizes.  There was much to take in with the eye; the shop was modern with good lighting, clean and presentable.  The atmosphere felt cheerful and yet calm.

It was easy to approach the ladies and I spoke to Angela who immediately offered me her time for a fitting session.  I was taken to a good sized fitting room where Angela asked me if I would like her to leave the room while I undress my top half and I expressed I was happy with her staying with me.  With a swift measure of my chest and no hint of the foisty Plus Four technique, my 28 back was confirmed.  As I was originally wearing a 28GG bra Angela nipped out and brought back a bra in a 28GG and 28H to compare the fit between the two.  I was encouraged to ‘lift and scoop’ myself into the cups throughout the fitting session which was sound advice, whilst Angela adjusted the back straps for me.  Preferring the fit and the way the centre gore sat between my boobs on the latter size, Angela drew to the conclusion that the H encased me much better.

Asking if there were any particular brands I like to wear and any colour preferences, Angela selected a small range of Freya bras with 28 backs, bringing some GGs just in case.

The first bra, which was actually the bra Angela fitted me in, was the newly released Freya Gem.  Having only seen Gem in the catalogue, at which point I’d decided I liked the design, I’d also assumed the form of the fabric and the design.  How mistaken I was, as when Angela brought the bra in, I said “ooh which is that one?”, thinking it was a totally new bra I didn’t know about.  I loved Gem instantly! The fabric is so beautiful and light; what is actually intricate lace I thought was a print.  I’d also previously believed there was a light pink colour beneath the cups but I was wrong again.  The only pink on black Gem is the three little bows.

I would liken the style and fit of Gem very closely to Jolie, one of Freya’s best selling lines.  It’s extremely similar in the construction of the cups, centre gore and wings.  This likeness isn’t a bad thing.  It was really comfy and I felt the difference between the GG and H as the H was much closer to my chest at the centre gore.  I had slight unfilled area in one cup which is only due to my boob.  My larger side was much happier in the roomier cup.  (I did try the Gem in the blue colourway too but I totally forgot to take a photo, so sorry!) I tried a black Freya Jolie for fit next.  I do have the Jolie myself in white and in a 28GG.  I always thought it fit really well, that was until I tried it in the 28H!  The difference again was noticeable when I put it on.  The extra room for my larger side was appreciated and it just felt perfect.  The base design is almost identical to the Gem but the fabric, although thin and unpadded again, is made from a different lace.  It’s also not sheer in the way Gem is, so the ideal lace bra if you prefer the more opaque look. Eyeing up the lovely bras hanging, waiting to be tried on, I realised there would not be much point trying the GGs out.  Oh how gutted I am, butterfly print Martha 🙁

There was also tattoo floral print Ada but it must have been a GG and not in stock in the H as I didn’t get to try that one on.  Oh, and biscotti colour Carys, which, well, I didn’t like enough to try on…

But, I did try on the brand, spanking new to AW12 Ivy in the very festively vibrant design of fern like leaves and spots which resemble berries in hot ‘firecracker’ red and teal green.  I love colour and Ivy really does deliver in that respect.  It felt very much like summer’s Ellie, the same slinky fabric and the way the lace panel edges the tops of the cups.  Ivy in 28H felt a lot better than the 30GG Ellie I tried, so at least I know it’s not that the shape and style didn’t suit me.  Ivy felt and looked fabulous so I’d recommend you try her out! After much deliberation I decided to go with Gem!  As much as I liked Ivy too I knew I had to follow my heart as Gem did something for me the minute I laid eyes on her.  I wouldn’t normally go for a thong, usually a brief or short, but Gem brazilian thong is a beauty; honestly, the back is so detailed and intricate I couldn’t not take her home too.  So I got the matching thong in a medium, which is basically a 12. I just want to thank the ladies in the York Leia store for being so brilliant and on the ball, especially my very friendly and efficient fitter, Angela.  If you’ve not gone for a fitting yet or even had a nosey around the store, I fully recommend their service!

What do you think of Gem?  Would you have gone with another style?

Feeling lost for words and just full of emotion after what’s been the worst morning. Reuben went into school upset after we had the longest hug at the school door and I cried the minute he walked off. I shouted at him when I wanted him to get ready to school when he was messing on. It was 8.25 and all I wanted was to get him at the sink. He wanted dad. I saw his face and he wanted to cry. So then I started saying he didn’t like me. I didn’t want to walk to school. I felt crap and I deserved to sit in the hole I’d dug. But I just don’t see how this affects Reuben. I’ve made him go to school feeling sh*t because I’ve dwelled on myself. I hate myself for doing this. He didn’t want to let go of me at the school door and I just wanted to take him home. Instead I let him go with tears and hurt while I came home and cried and went to bed because all I’ve wanted to do is jump from the bedroom window with the hope of inflicting some physical pain. Reuben deserves better than me. As I sit here with a heat pad on my belly nursing my period pain I can’t help but feel this is why I’m not getting pregnant. Today all I feel is that I’m an awful, awful excuse for a mum. 😞

Lazy Saturday morning so far and will probably last the weekend to be fair. We’re still various states of poorly with nasty colds so just want to stay home and chill. I took little man down for breakfast this morning while daddy tried to rest in bed. He looked so cute wrapped up in his Mario dressing gown. 🥰

I am always really late to adopt new trends because I’m so self conscious. Trousers wise I’ve only worn skinny jeans, jeggings and leggings for the past decade! I don’t know if it’s a curvy figure thing or what but I’ve always worried anything less than figure hugging would make me look awful. As a teen I was so anti “feminine” and lived in sports pants so I don’t know if there’s a bit of me afraid of being boyish and losing the figure that I took a long time coming to terms with and I suppose loving.

So here’s me in what were labelled ‘girlfriend jeans’. They feel a bit loose and not what I’m used to but they’re comfy and a cool pink wash so they’re here to stay. What do you think of them?

Little man’s been alright today, very choked up and coughy but good in himself, and thankfully the gp thinks it’s just a viral infection. He managed to get to sleep tonight and so far hasn’t woken himself up with a hacking cough as he usually has been. The Calpol vapour plug in is helping, but just wish Reuben would take medicine when he should. We all could do with a decent night’s sleep for once!

No school run today. Reuben’s had a horrible cough and snottiness for over two weeks and yesterday it’s got worse. Covid tests negative so not sure if it’s just a cold virus or infection. So the doctors have been rang and we have a phone gp appointment this afternoon to see what they think. Would like some medicine to shift it, not that Reuben agrees; he’s a nightmare taking anything and will fight you for it but what needs to be done will be done.

Anyone else down with a nasty cold? I had an infection for a week but it’s cleared now. Just want Reubs feeling better too.

This is how we’re spending our rainy Saturday afternoon! Bit of a Bluey dance-o-rama! 🤪

Feeling SO rough. Could be just some cold virus, could be a sinus infection, who knows. What I do know is my face is agony. So much pressure and pain, and yes, grossness. Been taking cold and flu capsules to try and help clear it, now onto the Vicks inhaler.

As well as me though, Reuben’s been full of cold too, and his cough sounds awful again tonight. Been some difficult nights sleep around here. Poor Sean trying to avoid our snotty germs while he nurses his poorly arm.

What a bunch of poorly poopers we are! Bleugh. 🦠 🤧

Reuben came home from school to find his medal for walking The Big Step Forward had arrived today. So as you can see, he’s pretty happy about it!

Proud of you Reubs!