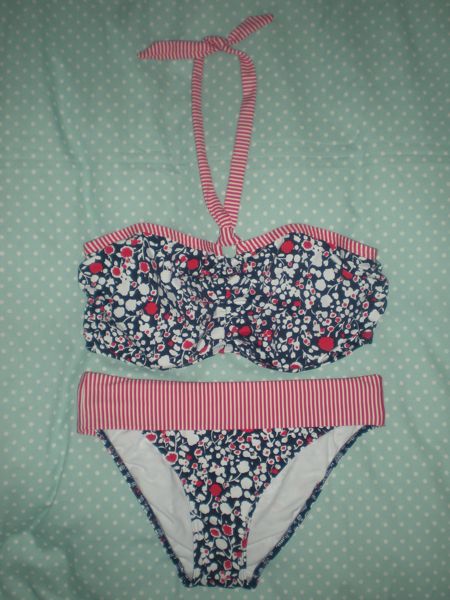 I’ve been meaning on completing my swimwear posts for what’s felt like ages and with autumn literally around the corner now (officially this weekend!), I decided it’s now or never!  Summer never really happened, did it?  I’d made it to the beach earlier on in the summer with the expectation of returning with the next sets of swimwear, but the weather decided to take a turn for the worst and never really returned.  So huge apologies for a mixed up post but hopefully the talk of summer and holidays may give you a little spirit boost, bring back those holiday memories and perhaps get your wardrobe planning under way for the next seaside break!

Over the first swimwear post and the second swimwear post, I covered swimsuits with a vintage twist and costumes for the sportier look.  For the final post I wanted to concentrate on more modern and current styles, so chose to check out the Freya Swing collection from Leia Lingerie.

I’ve never tried a bandeau bikini top so I tried that in a 30GG together with a flattering fold bikini brief in a medium.  I thought that not only was the style something different, with it’s tie neck and bandeau as opposed to a typical bra style cup bikini, but the print is really unique and stands out.  The red and white stripe detailing is retro inspired and the blue, white and red floral print isn’t ditsy or frumpy, opting more for an artsy, haphazard semi painted effect.  It’s one of those looks that you’re either going to love or hate, and luckily I think it’s pretty cool! I found the bikini really comfy to wear which I tested out by galavanting about the beach like a crazy woman.  I’m pleased to report that everything stayed in place where they belong:  the bandeau top was secure and didn’t budge and the briefs didn’t ride up my bum which was a brilliant revelation!

The bandeau top isn’t just a strip of fabric, there is actually a hidden bra support exactly like a bra underneath.  The 30GG was a nice fit but I would probably try a 28 back next to ensure a snugger tightness.  I found I probably had the neck tie a little too tight which pulled on my neck, so I think by reinforcing my bust at the band by moving down to a 28 would help rectify that.

At full cost the the Bandeau Top and Fold Bikini Brief retail for £36 and £26 respectively, so a little more expensive compared to the prices of Freya’s bras and knickers.  As it’s later in the season now you can buy both separate pieces for half price, so this is well worth snapping up.

I had a surprise bikini sent to me from Panache which turned out to be the Claudette collection.  It’s an unpadded regular styled bikini top with straps which arrived paired with a folded bikini brief in a size 12. The brief is exactly the same style as the Freya Swing folded brief above, in that there’s a top panel of fabric which folds over, giving a bit more coverage and smoothness to the tummy area.  I really like this style personally, it’s extra fabric without the bulk.

The bikini top is very similar to the Panache Tango.  The fit and shape is exactly the same as the bra I reviewed here (lost link).  It’s a very classic style with a contemporary floral and fern print in black and ivory.  Not a colourway or pattern I would go for myself but the style was spot on and I loved the way both pieces fit perfectly.  If you don’t want to draw particular attention to your boobs when you’re on the beach or in the pool then this is the perfect option with it’s unpadded, unfussy design. ****
Before I finish off and say a bitter fairwell to our pathetic summer, I wanted to leave you with some positive thoughts and hope for next summer.
I recently discovered a new swimwear brand for the fuller bust still in it’s infancy yet with all intentions to hit the ground running once they launch their first line of bikinis.  The name to remember – Beach Bacchanal.  Alex Gibson is the bust and brains behind the new venture and as a woman who can testify for the pains we big boobed girls have to live with, she’s the most qualified for the job.
I have high hopes for Beach Bacchanal who promise to set the swimwear world on fire and have it on it’s toes.  Sexy and trendy bikinis shouldn’t be an exclusive right for those with smaller chests and this is where the new business on the block will hit.  It’s about time new life was breathed into this market and I for one am pretty excited to see what Beach Bacchanal will bring to the table.  Watch this space!
Becky x