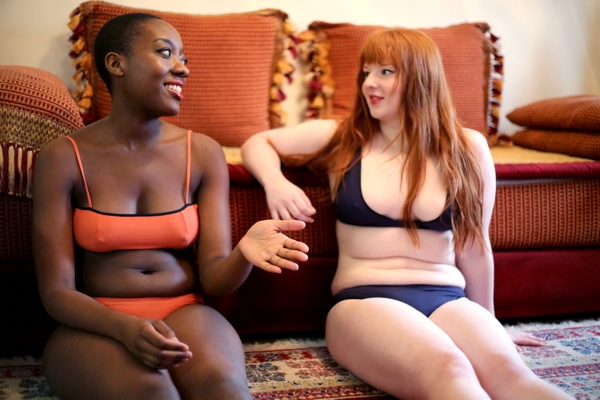 In an age where lingerie is a multi billion pound global industry it would be ignorant to suggest ladies underwear is a flimsy plaything in the fashion field.

With big players such as Victoria’s Secret and Agent Provocateur commanding massive turnover and achieving cult status, lingerie today is much more than practical apparel.  But is the face of this intimate industry merely all aesthetics with too much attention toward sex factor?  New start up, Neon Moon, thinks so, and is launching a revolutionary lingerie brand whose focus is more feminist than flirtatious.

Neon Moon have debuted a capsule collection with the intention for launch following a kickstarter campaign.  The introductory line features soft handle bralets and briefs for comfort, easy wear and minimum fuss.  A range that maintains a neutral style and doesn’t entertain sexual or gender suggestion.

The brand’s feminist message is perhaps more bluntly addressed through its unadulterated campaign; models less associated with your typical lingerie campaign, of multi ethnicities, bearing cellulite and folds of skin.  This is a brand rebelling against the industry’s ideals of beauty, not just stepping away from conformity but sticking two fingers up at the product of the media machine.

With Neon Moon repelling sexual connotation, I find myself asking what defines the term ‘sexy’ and why it is considered un-feminist.  While anything sexual typically attracts thoughts of lust to a carnal degree, does it mean ‘sexy’ can not be self empowering?  If a woman feels sexy, does it not reverse the objectification effect?  And does ‘sexy’ serve a specific gender orientation that undermines a woman?

Looking at the types of underwear available to women, choice is plentiful.  While most tend to lean toward fashion trends, there are variations away from the typically ‘sexy’.  Florals, full coverage cups, sporty designs and quirky prints are all far from attaining a sexual persona, but appeal to a broad spectrum of tastes.  Granted, ‘sexy’ is a descriptor open to debate, like ‘attractive’ is down to individual opinion.  What I consider sexy is not necessarily what the next person thinks (bringing a recent discussion on big pants to mind!)

The needs of a fuller bust challenges much of what is considered unnecessary and conforming in lingerie styled for smaller busts.  A large bust needs firm fitting structure, typically including underwires, which Neon Moon steer away from.  Where such rigid measures are needed, does it mean wires are un-feminist?  Structure often receives negative press for association with restriction and conformity, eg. corsets and girdles.  But, if full bust lingerie needs structure, can it still be feminist?  If Neon Moon designed lingerie for the D+ market, how would it look and wear?

Feminist lingerie (in my opinion) is narrowed down to the non-conformity of what women are usually marginalised by – such as bows, pink and cute things like lollipops.  It’s identity is unlabelled.  By losing the label your choices are widened, not limited, and allows the body to behave naturally, rather than be held back with oppressive shapes and ideals.

Or maybe it is simply down to the choice of being able to wear whatever, whenever.  A corset with its boning and reconfiguring of a waist doesn’t celebrate a woman’s natural figure, but the freedom to wear one for whatever reason is perhaps the stronger message behind the feminist movement.

As a full bust bra wearer I enjoy having the choice of so many different lingerie styles, the provocative included.  I wear an underwire for fit purposes as well as preference – I like the shape a wire gives me as much as what it does behind the scenes.  I feel that the feminist translation of lingerie with its soft cups and simple lines works for smaller busts, but I’m yet to be convinced how it will serve the full bust market.  Large boobs unfortunately need reigning in, both when we want them to and not.