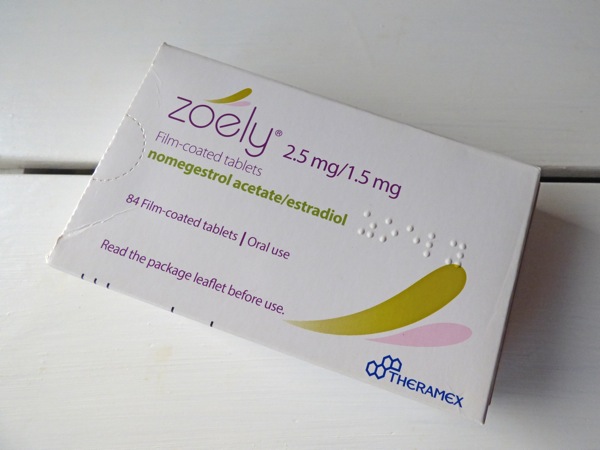 I’ve been on ‘the pill’ for a heck of a long time.  And, unlike most people’s reasons for taking a contraceptive prescription, mine was for sanity: I had demon periods.

For years I dreaded my period that more resembled giving birth; two days every month spent in agonising labour-like pain doubled over on my bedroom floor.  As a teen, my beastly period disrupted my school-life and had me removed mid GCSE history exam.  So, when my gp suggested the contraceptive pill for my painful periods – or Dysmenorrhea – I was desperate, and thankful for the small mercy that came in a blister strip.

Half my life later (17 years between you and I) and I’ve taken just about every brand of pill going.  From Loestrin to Yasmin, I tried them all in near vain.  Although the pain I had before any pill was now lessened there was always some side affect outweighing any worth.

Then I chanced across an online health article about a new combined pill called Zoely.  Unlike regular pills that are fully synthetic, Zoely is semi synthetic, with a form of oestrogen that’s naturally found in the body.   With reports of fewer side affects and all around better periods, it read like the answer to my prayers and I was certain it would be my wonder drug.

At first, Zoely appeared great.  So great, in fact, it didn’t bother me.  My periods were extremely light, almost pain-less and my mood swings levelled out.

But then I began struggling to get into my clothes.  Knickers, leggings, skirts; eventually my size 12s had to upgrade to 14s.  Convinced clothes had shrunk in the wash, the reality hit when a check up one year later confirmed I’d put on weight.  I never put on weight and yet here I was 15lbs heavier than the 10 stone I always hovered around.  Zoely had made me fat.

That was when I realised Zoely couldn’t be a wonder pill, because it’s still a drug, and drugs that mess with your ovaries can do crazy things to your body.

So, this month I decided to finally lay my pill taking days to rest.  My last synthetic cycle completed, the last pill strip in the bin.

Now I’m tormented with migraines day in, day out, while my hormones readjust.  I feel nauseous and lightheaded.  Coming off the pill was supposed to be positive, not a car crash of grief.

I’m pretty sure I’m doing the right thing for myself but I can’t help but wonder whether the withdrawals will ever subside.  Will the agonising pain return?  Will my pre-Zoely body return?  Will the power of the pill finally loosen its hold?

Zoely isn’t a wonder pill, and neither is any other.  There will always be a negative to the gain.  It all plays with your body as much as your mind.  Desperation for lighter periods and less pain is a valid reason to reach for the pill for as much its contraceptive purposes, but there is a price to pay, whichever pill you pop.

I’m waving my white flag.  Here’s to period-pain filled days again; a Feminax fueled behemoth, stubborn through gritted teeth.  (You have been warned.)