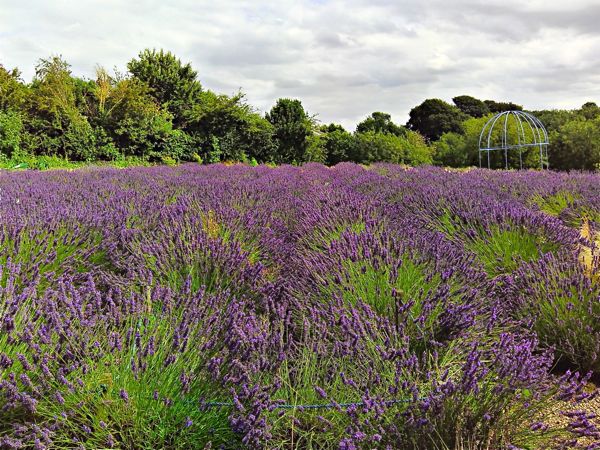 British scenery is as rich and abundant as you get.  While there’s no typical countryside view, rolling hills, pasture and moorland in its natural charm is as quintessentially British as the picturesque baling up of the hay.  I never tire of this seeing this country’s rural treasures!

Sprawling fields of colour are always a joy of Spring and Summer; the vibrant yellow rapeseed, poppies amid wheat, but the hazy violet of a lavender field is a sight I’d never seen but really longed for.  When I decided to seek out if there was such a thing locally, I was so excited to discover Yorkshire Lavender, a lavender farm based not that far from me in North Yorkshire, over near Malton in the Howardian Hills. Finding the farm was pretty much like discovering a hidden gem.  Driving there I expected to see the lavender ahead of us, yet puzzlingly there were no such sights.  We descended upon a compact visitor centre nestled amongst potting sheds and greenhouses, with various lavenders and herbs in pots for sale which led us up into the landscaped garden.

It felt like walking into Beatrix Potter land what with the pretty English borders and the really quite gigantic garden gate!  (I half expected Peter Rabbit to squeeze beneath it in anticipation of finding some tasty treats!) It wasn’t quite what I’d expected.  There were no long stretches of lavender planted in orderly rows as are far as the eye could see.  I was disappointed about it.  The Provencal view, it was not.  However, the carefully planted gardens, complete with snakes and ladders game and maze – both using the lavender – and the pretty sporadic patches of lavender, together with marjoram, mint and basil in their various species, some I never knew existed (the black peppermint smelled of peppermint chewing gum) – all made up for it.  And the scent in the air, it was divine.  I could have easily spent a dreamy long afternoon sat beside the lavender watching the busying bees and fluttering butterflies going about their work. I adore butterflies.  When I was little I used to catch cabbage whites in my hands (the peacocks were much too quick for me) and I released them into my bedroom, just for the pleasure of watching them flitting around. Before our visit was over we decided to try out the lavender maze.  It was fun, especially when we started to compete to see who would reach the centre first.  Being a bit sly, I thought it funny to hop over the rope and pretend I was nearly there.  I was nearly there, but certainly not in fairness, and I think the bees saw and plotted to teach me a lesson.

Even though I was so careful brushing through the close shrubs a bee had, unbeknown to me, dropped into the side of my shoe, and the pain, well, incredibly, excruciatingly painful.  I wanted to cry.  I don’t think I did, but I definitely whimpered.  I honestly couldn’t have moved or helped myself if Sean hadn’t been there to remove the stinger and half carry me to the safety of the potting sheds where a kind lady (who seemed far too well rehearsed in the rescuing from bee stings) assisted with a dab of lavender oil and an ice cube. With me reduced to one useable foot it was fair to say the day was over.  I limped to the car before realising I didn’t have my phone.  Panicking I’d lost it, Sean headed back to the centre.  Thankfully someone had found it amongst the lavender maze; I’d obviously dropped it in my state of shock-panic-pain.  This was a day I realised there are some good people in this world.  And the other lesson learnt: look after the bees, including those who fall into shoes, panic and sting you!