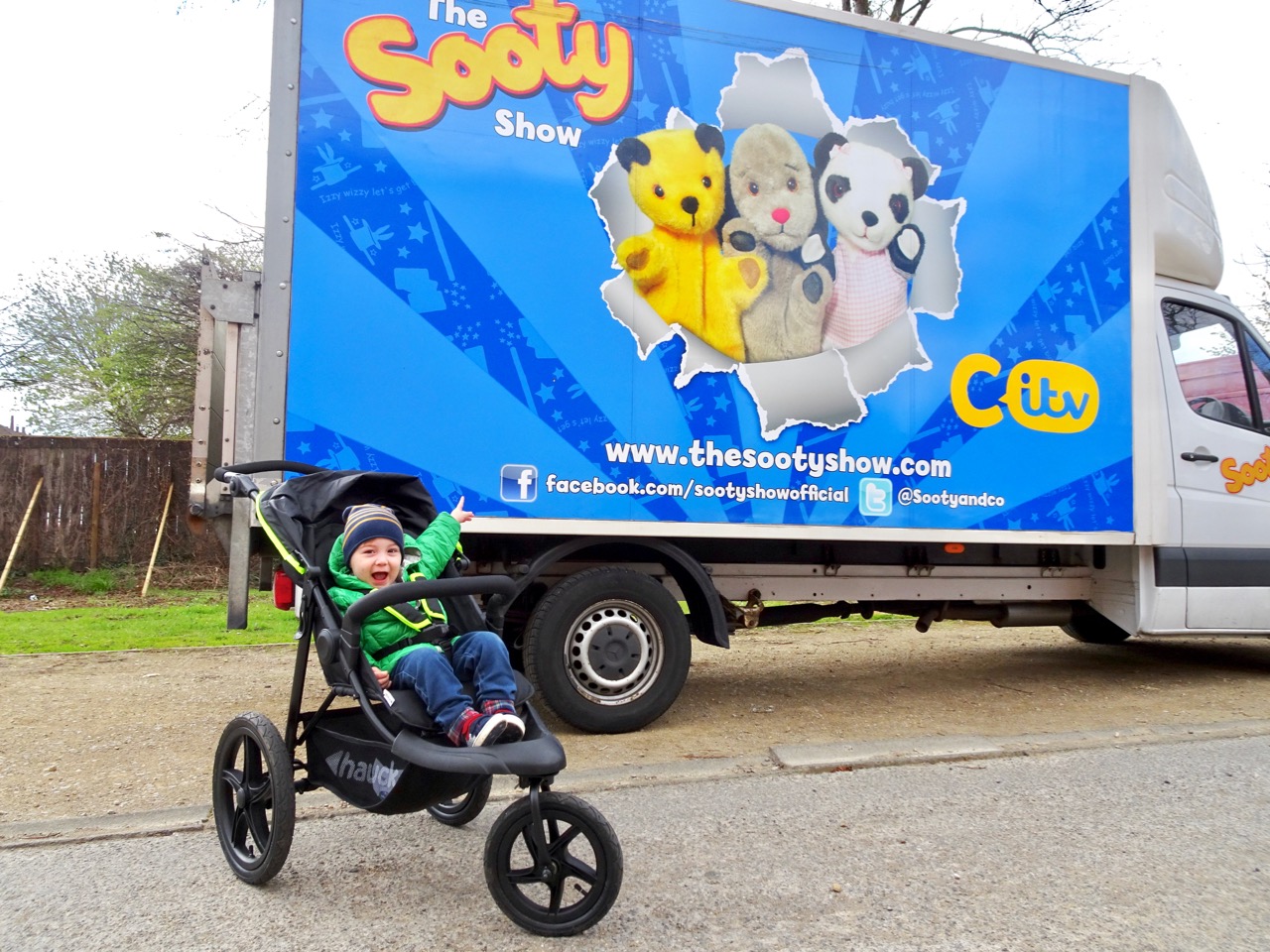 AD / THIS POST WAS MADE POSSIBLE THANKS TO SOOTY’S MAGIC SHOW TOUR FOR THE PROVISION OF FREE TICKETS. ALL THOUGHTS AND WORDS ARE MY OWN.

Kids are spoiled for choice when it comes to tv entertainment. In fact it isn’t even limited to tv anymore, in addition to the terrestrial, satellite and cable channels, subscription services such as Amazon and Netflix, and of course Youtube, are all vying for our little one’s screen time. And while I do welcome new children’s programmes appearing for my son’s generation I can’t deny the thrill of seeing my own childhood favourites still standing the test of time and showing the new kids how it’s done.

I think it’s fair to say Sooty is one of the most iconic British TV characters of our time, having clocked up more than 70 years screen (and stage) time that even my own mum grew up watching in the ’50s. It’s funny because puppets are hit or miss with little ones, yet Sooty and his mates Sweep and Soo have won over generations of toddlers and young kids – including my two year old, Reuben – despite being short on words and controlled up the rear.

British humour and classic slapstick comedy were made for each other which, in part, is why Sooty is the success the show is. It’s silly but always clever, funny without being crass, and when a child and adult can laugh together, it’s comedy gold.

Following Sooty’s latest season celebrating 70 years, Sooty’s (literal) right hand man, Richard Cadell, took Sooty and co. on the road with the Sooty Magic Show, touring theatres across the UK. Since Reuben’s morning highlight is watching Sooty on ITV Be, I knew we had to get ourselves along to one of the shows. Thanks to Sooty providing our tickets to see the show at Middlesbrough Theatre, we much obliged, and Reuben’s Auntie Lizzy, who conveniently lives nearby, came along with us.

When we popped along to the theatre to collect the tickets before the show, we found the Sooty van was already in the car park. I don’t mean Sooty’s little camper van (now wouldn’t that be something!), this was the tour van which likely contained Sooty, Sweep and Soo and their stage props, so of course we had to snap a few piccies with it. Reuben was super excited, though with it being his first theatre visit, I don’t think he knew what lay in store.

I’d never been in Middlesbrough Theatre before so finding it to be a fairly intimate size made the experience somewhat more thrilling. Merchandise was being sold in the foyer, where you could buy the show programme or a Sooty puppet – or for a couple of quid, your very own magic wand, which I bought for Reuben to fiddle with. We found our seats up on the balcony, thankfully end aisle, and didn’t have to wait long before the show began. Although Reuben had his own seat, he spent the entire show sat upon my lap, glassy eyes fixed on the stage, magic wand in hand.

Opening with the Sooty Show theme tune, Sooty appeared to an applause. I think I was expecting Richard to be dressed like he does in the tv show, in his Slaters uniform, but he came out wearing a dinner suit. Of course, I had to keep reminding myself, this was Sooty’s Magic Show, not a stage show of the tv series. So it was a totally different format, no story like the tv Sooty, but magic tricks in Sooty style.

The Sooty gaffs were really quite funny. Silly, but a good laugh. If Sweep wasn’t being shot up into the air he was charming sausages out of a basket, and if he wasn’t spoiling the music playing instruments badly he was pie facing Richard. Sooty behaved in his usual cheeky and a little bit naughty manner, playing up for Richard’s tricks and not going to bed when he was told to.

Alongside Sooty’s performances, Richard introduced two separate acts – Michael Jordan and Fantasie de le Nuit – who, though they performed their own sets, always incorporated an element of Sooty. Fantasie de le Nuit’s intriguing neon lights act was super clever. A giant sized Sooty was quickly joined by a giant Sweep who ended their fluorescent routine with a round of Baby Shark which I couldn’t help myself from singing. Michael Jordan’s act was good and really well done but we found the plate spinning went on a bit too long and we weren’t the only ones growing a tad bored of the act. Thankfully, beyond that, performances moved swiftly and often me and my sister found ourselves wondering how on earth a trick did actually work. Reuben on the other hand was only interested in seeing Sooty.

Possibly the best trick of the show was Sooty’s flying car in which one lucky young lad from the audience sat beside Sooty as it moved its way up into the air. I’m sure the car must have had a metal pole stuck somewhere but when Richard passed a hula hoop around it, the possibility seemed less and less likely. Oooh magic!

What I did notice throughout the show was how Richard worked so effortlessly on stage. Clearly a pro as it was easy to forget that Sooty wasn’t actually real. And to see Sooty or Sweep performing a magic trick, whether that be balancing plates and a stack of objects or misbehaving at nap time, it was actually Richard multitasking behind it all.

I just wished the balcony didn’t feel so disconnected to the stalls; we didn’t see Richard or the support acts look up all that much, so it often felt like we were watching the audience below us watch a show. When the little ones were vying to be picked from the audience, it was a saddening scene to see them being ignored.

Not that Reuben was particularly fussed; fifteen minutes into the second part he’d gone off to the land of nod. To be honest, being up on the balcony was so hot and stuffy it turned us all into blazing red beetroots, so I wasn’t surprised Reuben felt so zonked. I was gutted he had since he completely missed the amazing car stunt, which I’m sure would have been his favourite bit.

Ending the day with a meet and great was a lovely finishing touch. The queue was that long I’m sure everybody in the audience were waiting to get a snap with Richard and Sooty. I made sure Reuben was awake by this point, so we wandered around outside in attempt to cool down before getting in line. Coming up face to face with the tv stars he watches every morning, Reuben was a picture puzzle – I don’t think he quite understood how Sooty was right there in front of him! It’s just as well he’s not old enough to find me an embarrassing mum yet because, yes, I did indeed shake Sooty’s paw (and take the most cringeworthy selfie.)

After all the excitement Reuben spent the rest of the day fairly poorly with a fever, so sadly the day didn’t end on a high note. The following morning however, Reuben found his Sooty wand and, remembering what happened the day before, looked at me with a cheeky glint in his eye.

Have you seen Sooty’s Magic Tour? What would you love to see at the theatre?