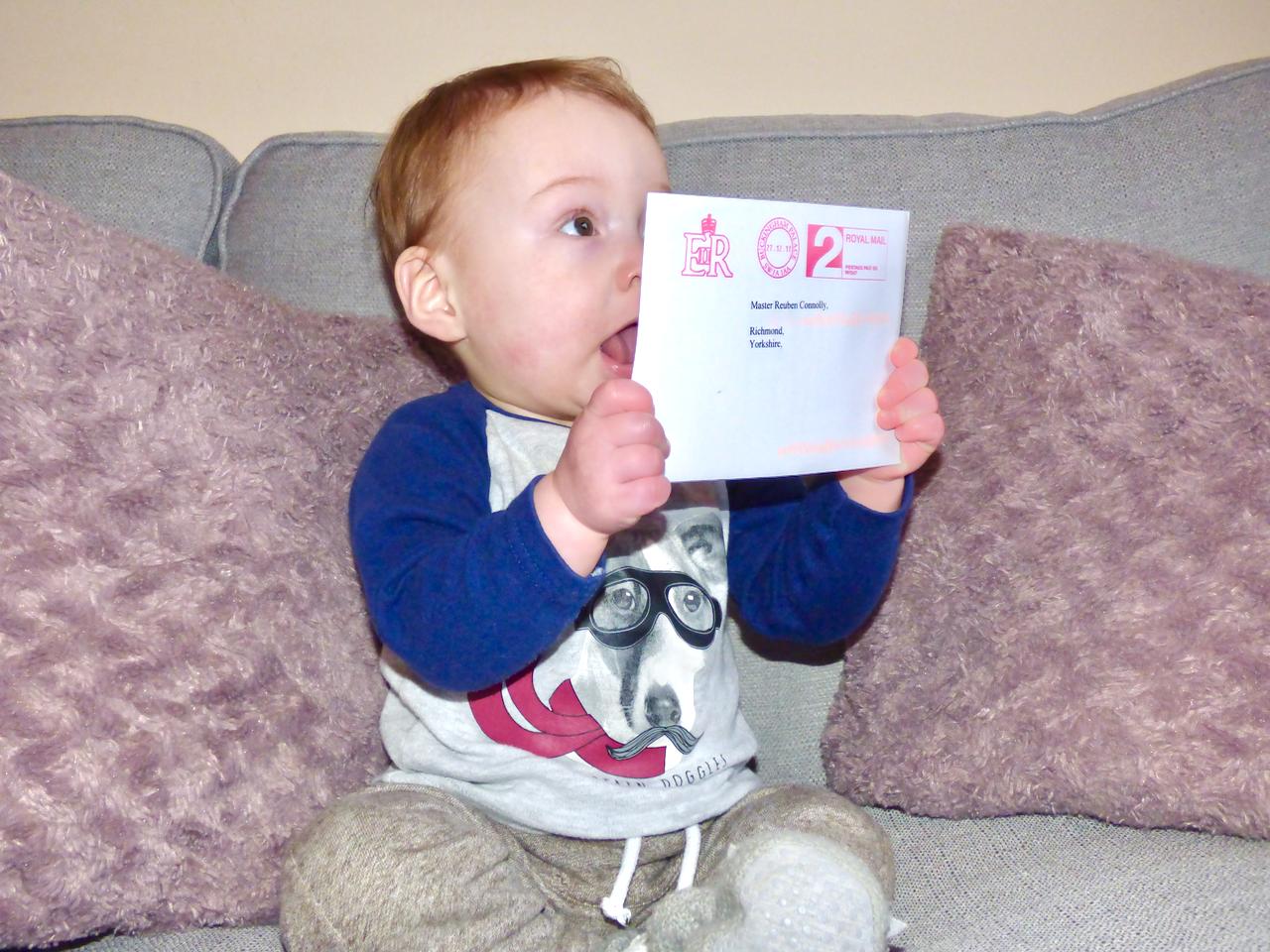 Back in November Reuben posted a very special Christmas card to a royal household.  The recipient: our possible future king, Prince George!

I was intent on making Reuben’s first Christmas a special occasion; lots of festive activities to enjoy together as our new family, and new traditions to establish.  He met Santa for the first time and decorated his first tree.  But instead of writing a letter to Father Christmas, I thought we could do something a bit unusual, and a Christmas card was sent to (I’m positively certain) Reuben’s royal style icon, little Prince George.

What started as just a fanciful thought quickly escalated to a plan of action.  The right card must be picked and a message thoughtfully written.  Reuben liked a card that was full of penguins wearing hats so it was selected, though being 8 months of age he wasn’t able to pen his words himself, so mummy helped in that department. I’ve never written to a member of the royal family before, and now in hindsight I probably ought to have been more proper.  His Royal Highness?  Yours sincerely rather than love from?  But it wasn’t about me, it was coming from Reuben.  He may not have understood what we were doing or what on earth mum was writing, but we were doing it together, and the spirit of family and togetherness was at the heart of our activity… as I wrote what I imagined my little man would want to write!

We even had printed a photo of Reuben, and popped it inside the card.  This was to be Reuben’s first encounter with the monarchy after all, it would only be polite to put a face to his name. By funny co-incidence, on the day Reuben wore the same outfit he wore in the photo we sent to Prince George, we received a royally franked envelope in the post.  Six weeks on, we’d received a reply!

Addressed to Master Reuben Connolly, the small envelope, postmarked from Buckingham Palace and bearing the royal Elizabeth ll Regina cypher, looked excitingly impressive.  So once Reuben had finished his breakfast and washed the cheese spread from his fingers, we settled to open it. Reuben received a photo card from the royal household at Clarence House: Prince William and Kate, the Duke and Duchess of Cambridge, Princess Charlotte and Prince George himself.  The picture is a shot of the family on the balcony of Buckingham Palace for Queen Elizabeth’s 91st birthday parade earlier this year.  Prince George looked very smart in his outfit that day – braces and peter pan collars are such a cute look for baby boys and toddlers!

On the reverse of the card there’s a printed seasonal message, thanking for what we sent and sending “warmest thanks and very best wishes for Christmas and for the New Year”. Speaking as Reuben’s mum though, I’d be lying if I said I wasn’t disappointed by the reply.  It’s really just a generic postcard.  Don’t get me wrong, it’s a great picture, and it means a lot to get a response at all (you’d be lucky to receive the same if you’d sent a fan letter to some celebrity.)  But, it just would have been cool for the card to mention Reuben’s name, feature some handwritten message or just be signed by someone at Clarence House/Kensington Palace/Buckingham Palace/wherever the card came from, on behalf of the royal family.  We all know Prince George wouldn’t really have seen Reuben’s card and his photo, but a little personal acknowledgement to the next generation, considering Reuben’s a baby and the effort we went to, would be a lovely gesture.

Anyway, the card shall be put into Reuben’s memory box – a collection I’m keeping safe such as his hospital wrist bands, the photo the hospital gave me of Reuben in his incubator and little bits Reuben wore as a newborn baby.  A box of keepsakes I’m treasuring and hopefully Reuben will be interested to look back through when he’s older.

Have you ever written to the royal family or someone else you highly respect on behalf of your children?  Did you get a reply?  Who would you most love to receive special post from?  Speak soon!