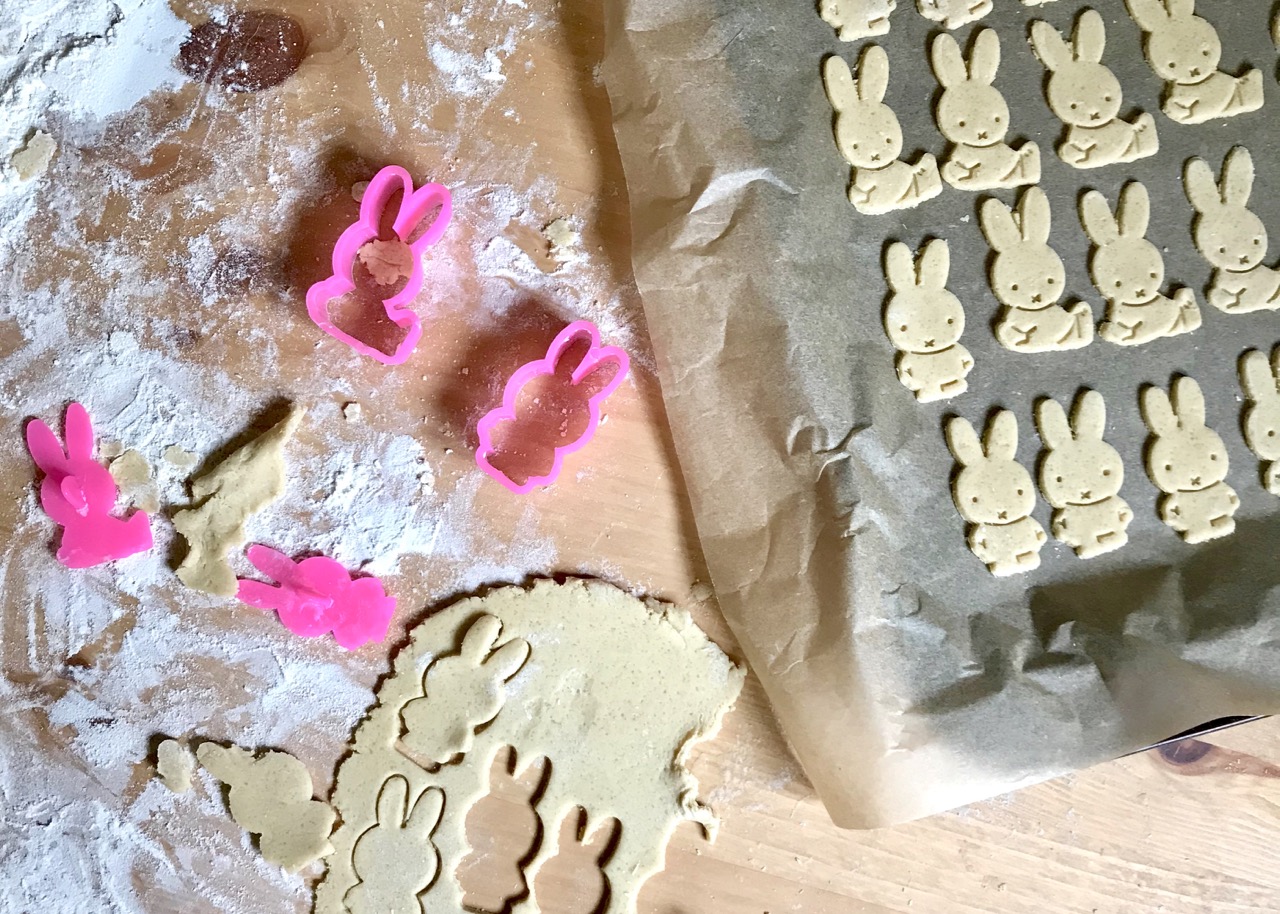 WE MADE IT! | Baking Gingerbread Miffy Biscuits with The Toddler Baking with a toddler wouldn’t normally be on my list of things to do.  I like baking, but as a perfectionist (who oddly isn’t all that great a baker) and who loses their biscuit over the littlest hiccup, it’s best I bake on my own.  So today I threw my cares to the wind and embraced messy baking with the little one!  After all, I don’t want my anxieties spoiling everyone else’s fun.

I have nostalgic memories of baking with my own mum so I’ve often thought about recreating that lovely mummy-child bond with Reuben.  At 19 months old, he may be a little young to get cooking in the kitchen but I figured it could never be too early to start learning.  I decided biscuits would be a fun, interactive way to start, giving us the opportunity to use some Miffy cookie cutters that I’d bought a while ago.

That’s the beauty of baking – it’s educational messy play that’s fun to do and rewarding at the end!  Not that that stopped Reuben sampling the goods before anything even made it the oven, he was already nibbling away the biscuit dough.

If it were just me baking I’d have gone into my own little world in the kitchen.  Stuck a playlist on and immersed myself into a relaxing afternoon of me-time.  But with a little one who can’t reach the countertop, I needed to think out of the box.  So I decided to take the kitchen into the little room just off the kitchen, brought the coffee table in from the living room and set out all the ingredients and equipment that we’d need right there.

Wanting a fairly simple recipe to follow I referred to my trusty Be-Ro book (It’s amazing; I swear everyone should own one).  Wanting a nice. solid dough suitable for Reuben to play with, the gingerbread men recipe was perfect. Measuring all the dry ingredients out was probably the most challenging bit.  Reuben was particularly interested in the bag of flour which he didn’t take long decorating the floor with.  And when I added the ground ginger, he stuck the spoon in and ate a whole mouthful, which he immediately regretted.  Funnily he didn’t try to cough it back up, so I just encouraged him to drink plenty water from his cup.

I knew Reuben would be keen to help mixing the ingredients so I made a point of having two wooden spoons ready.  He loved getting the chance to stick a spoon in, although I was wincing at the sight of all my flour getting flicked out of the bowl. When I got the dough nicely kneaded into a ball I split a little off so Reuben had his own to deal with. Good for him to experience, great for me to get on with the job!  Although the reality wasn’t that plain sailing.  Cutting the Miffy shapes out, Reuben was more interested in what I was doing, and he kept stealing Miffy’s ears and prodding the dough.

I was surprised by the end we had a fair amount of biscuits to go in the oven.  We had two trays worth!  Covering the trays with greaseproof paper (good call, dad) definitely made the task easier, and I was really impressed with the cookie cutters, which came in a two pack and were made in two parts – the cutter and a detail press – they’d barely cost me £2 off Amazon! After ten minutes the gingerbread biscuits were ready.  Okay, they were a bit overdone (told you I wasn’t great) but we had tons to eat.  And they actually taste really good, despite being a little on the crispier side.  We’ve eaten far too many gingerbread Miffys today – I’ve lost count how many Reuben has munched away on – but after a job well done it was a tasty reward.

So how did my first bakery session with the little man go?  Interestingly!  Messier than I’d anticipated!  But I let my hold on perfection go and decided wonky Miffys didn’t matter.  I wanted to make sure they made it the oven relatively unscathed, but other than that, I reminded myself the experience was more important.  Well, we can say that now we have a squillion gingerbread Miffys to scoff!

Have you encouraged your little ones to get baking with you?