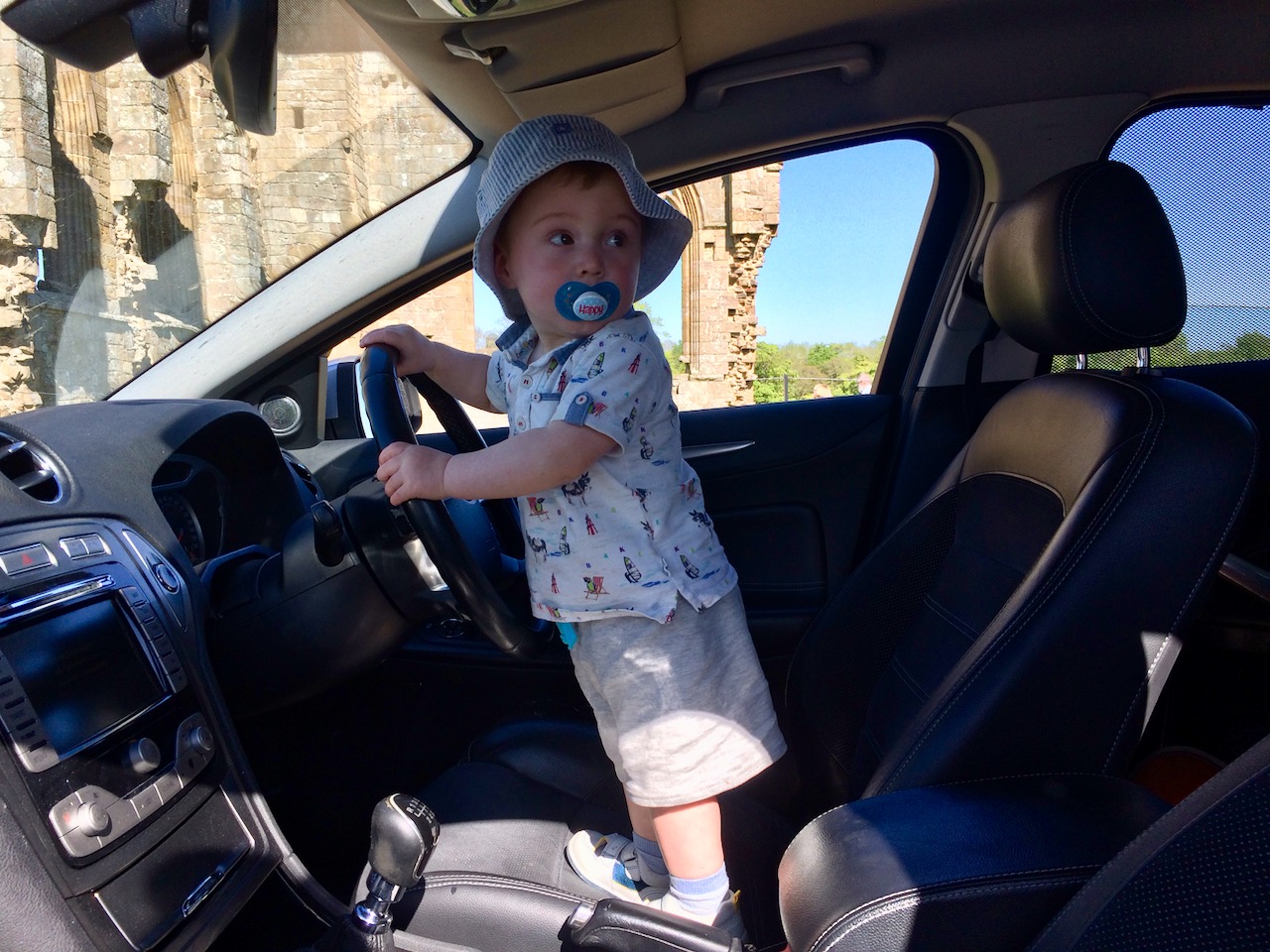 You don’t worry so much about the sun as when you become a parent.  Fastened into their car seat, a glimmer of sunlight across your baby’s face is all it takes for you to break out in a cold hard sweat. And that’s before the heat of the summer sun has you stressfully fighting for shade.

Like every parent who owns a car, we found ourselves needing sun shades for Reuben last summer, and just as quickly found they’re all pretty dismal.  I’m sure we’ve bought them all – the mesh rectangles that suction to the window, the retractable roller blinds, and have you seen those socks that cover the entire window, including the outside?  (They look… silly.)  And however the pop up and roller blinds stick to the window, they do not stop the sunshine.

The closest we got to a decent blind was from a sun filtering vinyl that applied directly to the glass as a thin film.  It worked but it was incredibly fiddly to put on and it didn’t even fit the window properly so it ended up looking a bit of an eye-sore, and a permanent one at that.  It seemed whatever we tried, there was nothing perfectly solving the issue, and definitely not one that looked reasonably good. With this summer being Reuben’s second, I’m hoping we’ve finally got the car shades nailed.  A company called Car Shades got in touch and told me all about their car shades and how they’re different to what’s on the market.  Part of me was skeptical – well, nothing seems to work! – but I was also quite excited at the prospect of making sun glare across Reuben’s face an experience of the past.

First of all, Car Shades don’t just mass produce a single design in the hope it meets all needs – get this – they’re tailored to fit.  Treated like any other serious car part, the shades you buy are based upon what car (brand, model, plate) you’re putting them into.  Quite simply this is because the shades are made to be a perfect fit, after all, a Ford Mondeo does not have the same window dimensions as a Ford KA, and last season’s style isn’t necessarily the same spec as the new design.

And you don’t just get one car shade, you get as many as needed to shade your entire back windows.  With our current car a hatchback Mondeo, that meant two passenger window shades, two to cover the rear window, and two small triangles for the quarter light glass.  One set of car shades, depending on the amount of windows your car has. I don’t drive at the moment so our main and only family car is that which is driven by my husband AKA Dad.  He keeps it on the road, gets it into the garage and fills it’s tank up, it’s essentially his car. But for this review I wanted to fit the car shades myself so I could see how they work and really, how easy they are to put in.

(Okay, so the husband tried them first and informed me that there isn’t anything to putting the shades in, just a case of sliding into place and clipping.  So it ought to be reasonably within my capabilities then!)

I was really surprised by how simple literally meant simple in the case of fitting these shades.  Each shade is slotted into place to the inner side of the glass, affixed with a couple of metal clips and held in place by the weather strip.  And voila, your shades are ready for business! Although I’d have to admit the shades don’t block out as much sunlight as I’d want (sometimes there seems to be some ray of light getting through somewhere), they definitely do the best job of all the blinds we’ve tried.  Obviously there’s a certain degree to which legality and safety comes into play if the shades were any more opaque, and it wouldn’t be realistic to eliminate all the light coming in, so I appreciate it’s a best result under the circumstance.

In spite of that, the passenger side shades do work well; they stop a lot of the bright sunlight from pouring in onto Reuben’s face and I like the fact he can still see outside.  Even better, we can have the windows down and still have shade!  Unlike every other blind we’ve had, because the Car Shades blinds are secured to the window frame rather than the glass, they work regardless of the window being closed or open.

A surprising benefit of the car shades is that they help keep the temperature of the car down, because most of the car’s windows are shaded.  So it does feel a little cooler than if the sun was able to pour unadulterated through the windows.

Also we don’t have to worry about Reuben trying to poke his fingers out of the window, or more likely in his case, throwing his cup out of the car.  It’s cool, protective and discourages intrigued toddlers.

At £82 for our car’s shades, they sound an expensive option.  But considering you’re getting at least four large blinds, and any additional small windows covered, they work out pretty reasonable – less than £20 a blind is good value considering they do a decent job and look smart too.

How do you keep the sunlight out of your car?  Do you have an amazing sunshade ‘hack’?  I’m interested to hear any tips to keep little ones cool in the car this summer!