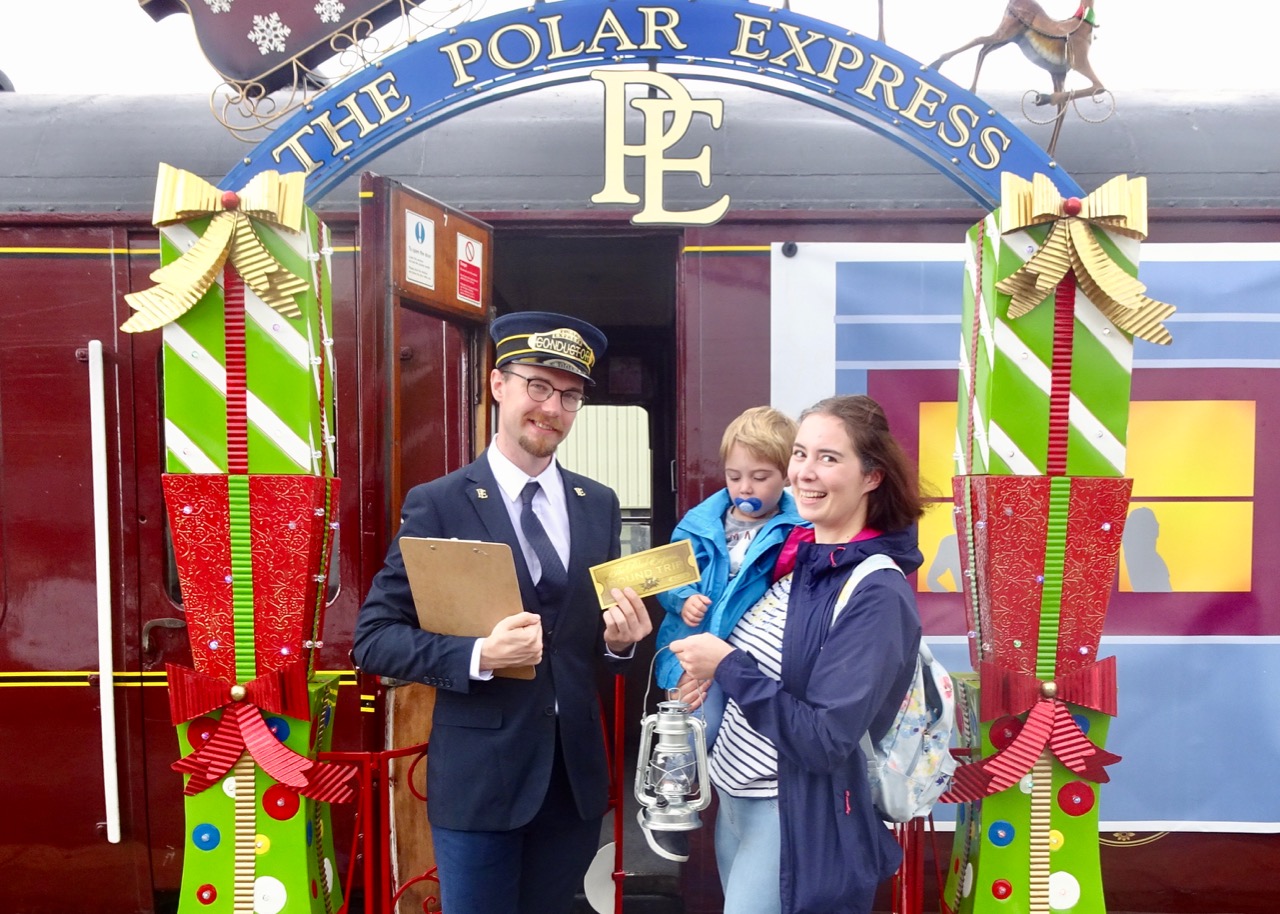 DISCLOSURE: AD / THIS POST WAS MADE POSSIBLE BY A FREE PRESS DAY FROM

What do you do on a miserably wet August day? You jump onboard the Polar Express, apparently! Last week Christmas came early to the Wensleydale Railway when the official Polar Express made a special press appearance. Our family went along to sample some of the magic that’s heading to North Yorkshire’s heritage line later this year, and I’d be lying if I denied feeling that Christmas tingle.

You may think it’s too soon to talk about the ‘C’ word – after all, it is still summer (just) and the kids are still on their holidays, but the reality is, Christmas isn’t all that far away for booking up those crucial festive activities. The globally famous Polar Express attraction is no exception; from November to December 2019 the Polar Express Train Ride will be rolling into Wensleydale Railway’s Leeming Bar station for the first time ever, and you can guarantee to expect high demand on the tickets.

Initially introduced as a book in the mid 1980s, the magical Polar Express story was brought to life as a motion picture in 2004. While it wasn’t a movie of my childhood, I’ve still enjoyed watching it every Christmas making it one of my more modern festive favourites.

Promising a taster of the Polar Express train ride experience, the preview press event allowed us a sneak peek of the delights yet to come. Sadly minus the steam engine itself which I was pleased to hear will arrive for the main event (and actually look like the Polar Express too!) we did have an authentic carriage festively decked out, with the train conductor (looking suspiciously similar to Tom Hanks’s conductor) welcoming us on board just like you’d expect – “Well ya coming?” Yes. Yes, I am!

We’re told things will be looking quite different to what we see on arrival. The station and the car park will be transformed into a 1950s looking set featuring scenes from the Polar Express movie. There’ll be food marquees and plenty family engaging activities to spend your time exploring before being entertained in full theatrical style inviting you right into the film itself before you gear up for the grand train ride. It sounds like it’ll be festively atmospheric, maybe a little hectic and noisy, but I’m sure it’ll all play part and parcel of the anticipation and making a good old night of it.

But right now, we had a train to catch. Reuben had been itching to get into the carriage (as you’d expect from a two year old who doesn’t entertain patience) so it was a relief as much as it was exciting to finally board. Once inside, I totally forgot we’d left summer behind us and were now cosying up beneath faux foliage swags in soft lantern light.

What happens on the train is basically the unfolding of the story of the movie. Chefs and waiters dance and sing enthusiastically, serving up thick and creamy hot chocolate with giant freshly baked cookies and reading through the classic storybook, while characters retell familiar monologues as the Express departs for the North Pole. Obviously we don’t really head to the North Pole but the train does actually leave the station for about half an hour. While we “press people” didn’t get the thrill of the train journey, this is the point where Christmas guests will look out of the window in anticipation of spotting the big man himself. And Santa boards the train.

I didn’t expect to see Santa in the middle of August and yet here he was, in full crimson gear and (genuine) bearded beauty. I love a good Santa and I can confirm we got the real deal.

Anyone familiar with the movie knows the main little boy (or “Hero boy”) is given a sleigh bell from Santa as the first gift of Christmas, so you’d easily think only the kids will receive a bell. Well, even the big kids do. Everyone in the carriage was personally handed this gift by Santa himself who gave us a little bit of personal attention too. Reuben was overwhelmed and shied away over my shoulder but he came around to the idea thanks to curiosity and Santa’s charisma.

It’s a beautiful bell too; a solid chrome bell with a crisp ring, secured onto a leatherette cord; and seeing as we each received one I’m going to sew them onto our Christmas stockings when the time nears.

Sitting in our little booth with our lantern flickering and our cups of hot chocolate, it felt so cosy, despite being dressed in our rain jackets. On the proper Polar Express night, guests are encouraged to wear pyjamas to emulate the children from the book, because if you remember, the children have been tucked up in bed when the Polar Express arrives to whisk them away. For that, I will totally go all out and wear my jammies though I think I’ll don some thermals underneath because I don’t fancy a festive bout of hypothermia.

The entire train ride on the Polar Express evening will last a good hour but there’ll not be a moment to become bored. Once on board the train you’re fully immersed in the story itself, with each actor in full believable character right from the accent to the glint in the eye. It’s theatre but probably not as you’ve experienced before.

We only saw half of what will be on the night when the Polar Express officially opens its carriage doors, and I’m convinced it’ll be an experience to cherish. With so many options what to do during the lead up to Christmas, the Polar Express train ride is one of the more genuine activities you could choose to do. It has the heritage, the fun and the thrill that’ll satisfy true Christmas believers young and old.

Tickets for the Polar Express Train Ride can be booked now.