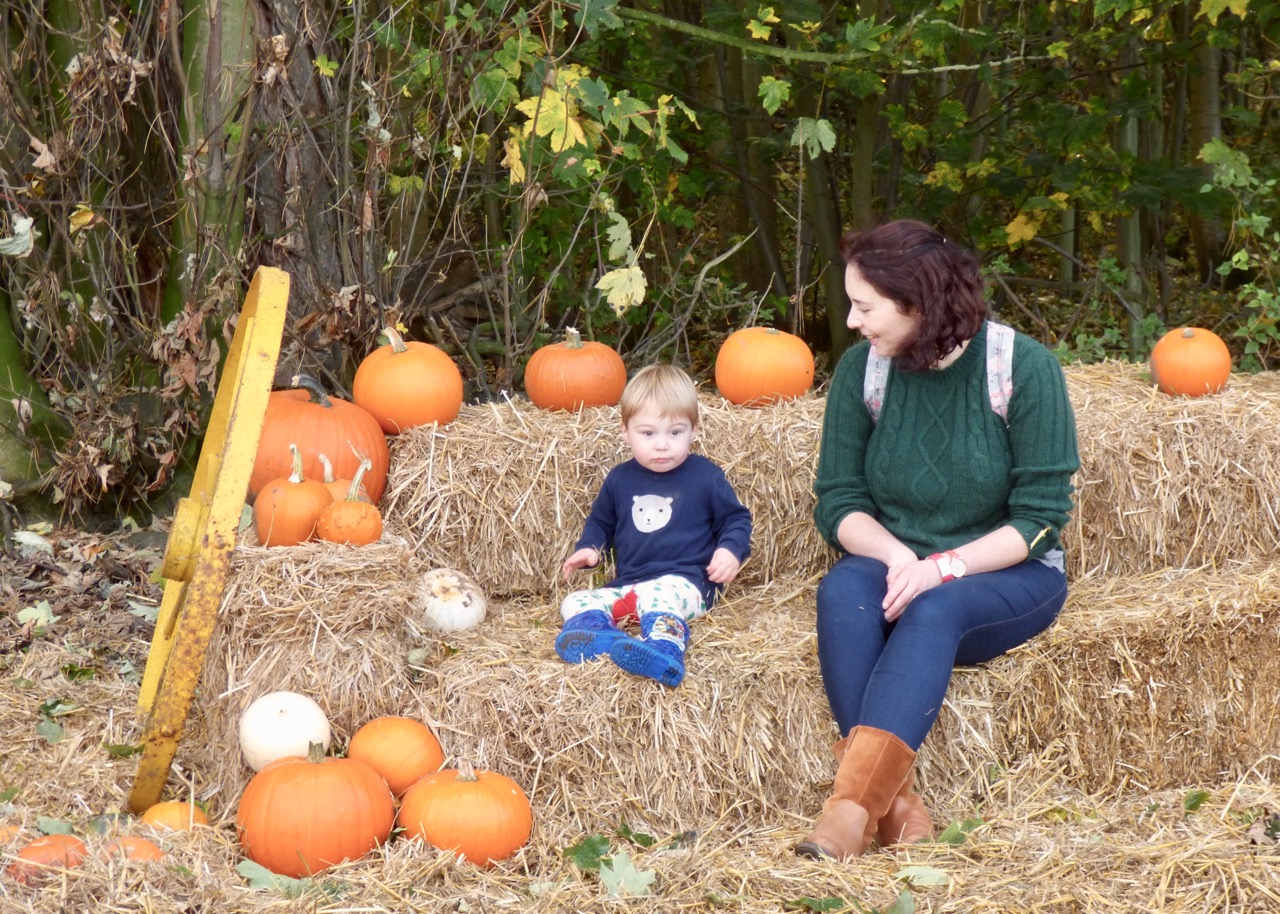 Autumn is a magical time of year.  Despite the shortening days creeping toward long chilly nights, the sweet scent of fallen leaves on frostbitten air announces harvest time, promising forthcoming seasonal holidays and a time to retreat with simple home comforts.  And nothing says Autumn celebration quite like a pumpkin!

To be fair, we’ve not always done pumpkins in this country.  The old British tradition for halloween was always to carve a turnip which, granted, was no mean feat.  Thanks to our American friends who funnily couldn’t get hold of turnips so carved pumpkins instead, we Brits are now fanatical about pumpkins too.  And since they’re so much easier to cut than a solid root veg, can be grown a lot bigger, and can be eaten in a variety of tasty ways, there’s good reasons why a pumpkin is probably a better choice these days.

Today we visited Yorkshire Pumpkins, a pumpkin farm based close to my childhood home of Thirsk, which was a huge revelation to me since I didn’t even realise we grew pumpkins in this part of the world.  I love a good old ‘pick your own’ – I find it immensely therapeutic picking fruit straight from the source.  Being able to select exactly what I want is also a big bonus to buying like this because not only are sizes and shapes massively variable, but you chance upon varieties you never even knew existed.

I’m not sure who wanted to go to the Pumpkin farm more, Reuben or me, but he was positively up for the idea despite not having much of a clue what I was telling him.  Knowing it was going to be an outdoor activity, allowing Reuben pretty much all the freedom his little legs could desire, meant I was actually looking forward to going.  And with word of an additional free hay bale maze and (to pay for) soft play for kids it looked like a good way to get Reuben out into the fresh air. Thanks to ample signposting we made it to the farm in good time and got parked up in the adjacent field without any problem.  Anticipating a muddy terrain, I got Reuben changed into his wellies before we headed off following the direction of some pumpkins.  It led us straight into a barn where the refreshment stand stood, with the surrounding area laid out with casual dining seating, a table to carve your pumpkins, and a huge area of pumpkin related parlour games and kids soft play.  From there we walked out into a yard where the portaloos were sited and several wheelbarrows stood ready to be taken up into the field.

The route to the field was a short meander following the pumpkin trail, taking you through an impromptu game of pumpkin golf before reaching the ‘pick your own’ zone, where a very photo worthy straw bale bench was set up.  The low walled straw maze was right there ahead of the pumpkins, while a straw bale constructed slide beckoned visitors to grab a piece of carpet and ride it.  (We did.  It was amazing.  No, I don’t get out much.)

The pumpkin patch was a glorious, if a little bizarre, sight down the valley.  So much orange! Many of the pumpkins were the typical jack o’lantern orange hue, and there were some whopper sizes, but on a closer look there were also so many intriguing varieties; some were pretty and dainty, some with stripes, others were unusual colours like pasty white and blue, and some were just fantastically ugly warty beasts.  I wanted to pick a good range as I’m hoping to try my hand at baking with them as well as displaying, so we scouted around and got a nice varied collection in the barrow.  I actually didn’t have a clue until later on getting to speak with the family who run the farm who advised which pumpkins were best for what.  The regular big orange pumpkins aren’t actually primarily grown for eating, while the blue ‘crown prince’ pumpkin is a good one to cook. Reuben was a little freaked out by the pumpkin field; initially he kept wanting to run off into the next field and got overwhelmed and upset, but then he hadn’t had his nap which I don’t think helped. Eventually he came around though, and was great at picking pumpkins and carrying the big, heavy squashes over to the barrow.  I think Reuben most enjoyed trying to push the wheelbarrow though, so most of the time it was just me enjoying myself amidst the dirt.

By the time we decided we’d picked our pumpkins, Reuben was keen to explore the hay bale maze, and this really perked him up.  In fact, he found it hysterical following me round and spying around the corners of the bale walls.  It was great fun!  I was daunted by the slide though.  It looked way too steep, especially to take Reuben down on, but I did, and guess what, he loved it.  I need to learn already that whatever I think will scare him will probably do quite the opposite! Reuben spotted some free ranging hens potter into the field, so off he went in vain attempt to befriend or pick them up.  I love chickens so I’m liking the fact Reuben seems interested in them too.

Heading back to the barn, we gave our pumpkins a bath.  The well considered sinks equipped with essential scrubbing brushes located in the yard meant pumpkins could be washed free of any residual ground dirt to save your car boot.  After that job well done, Reuben went for a brief dive in the ball pool before being tempted away by the children’s ride on tractors.  It may have been all play for Reuben but to me it served as research, as I got to gauge what he thought of all the types of tractors I’d been looking at for Christmas!

All things considered, I can safely say we had a brilliant day.  Actually we were only there about two hours but could easily had stayed longer, it was that enjoyable.  We came away absolutely exhausted and Reuben was covered in dusty soil and straw.  But like a badge of honour, to get that grubby means a day well spent, and that it was.  There aren’t many places you take the family out for the price of a pumpkin or three and Yorkshire’s newest pumpkin patch is already the winning recipe.

[DISCLOSURE: Pumpkins were provided free.  All opinions are my own.]

Have you ever been to a pumpkin farm?  What do you do with your pumpkins?

Crafting with Colour | We Tried Tie Dying T-Shirts
My Mindful Lockdown Hobby: Sea Glass (& How to Find it)
All Aboard the Optimist: A North Yorkshire Moors Railway Heritage Experience
Spooky Sea Fun at Sea Life's Ascarium
activities days out family things to do