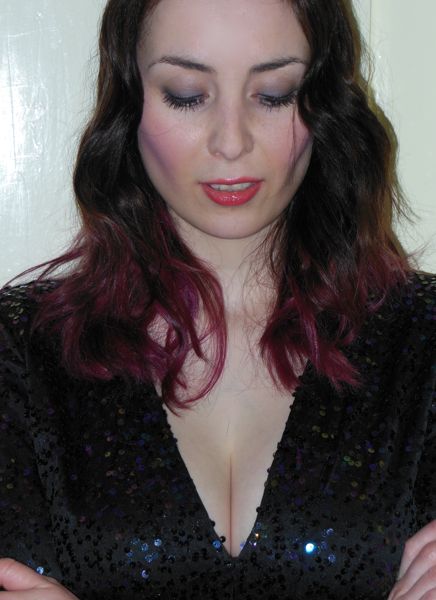 When Wonderbra asked me to try out their latest lingerie innovation, I had no idea what to expect.  Wonderbra’s most advanced collection with it’s unique wireless support system, the The Ultimate Plunge, has already given us a strapless and the most daring plunge bra utilising a clear central gore, allowing us more freedom with our wardrobe.
The completely redesigned Ultimate Plunge bra now features a stronger and more supportive band structure, with low central gore cut out promising a deepest plunge ever.  With boobs on the bigger end of the bra scale, I’d be forgiven for being a little skeptical, and so I was keen to see how this new, crazy shaped bra would work for me! First off, it’s worth noting that the Ultimate Plunge currently only goes up to an F cup, which for me, is in the territory of my pre-proper-fitting days.  I used to wear a 32F before discovering I’m a perfect 30GG, and 32G is my usual ‘compromise’ sister-size, so I  knew that receiving a 32F wouldn’t be the most ideal fit.  However, I knew that I could still judge fairly how wearable the product would be, which was why I still agreed to trial it. Whilst it’s comically obvious the cups are undersized (slightly!), I was really amazed at how well the bra performed.  Yes, there’s an immense amount of jiggle, but with three quarters of boob proportion on public display, you can’t expect anything less!  The cups, which looked like they wouldn’t be up to much, managed to keep me intact, and through vigorous cavorting the only spillage I suffered was the general bulge/quad-boobing from my boobies being too big – not the bra’s fault.

Unlike the two aforementioned predecessors, the new shape works as both a conventional strap bra and strapless, which is a huge bonus, especially if you’re flitting between dresses of different styles deciding what to finally wear.  (Yes, I’m one of those.)
Imagine not being limited by your bra!  Flashing bits of cup and centre gore need only be a distant memory of past fashion faux pas.  Being able to wear a sassy plunging neckline without worry or having to go bra-less (here’s looking at me at the UK Lingerie Awards) is a pretty awesome innovation.
What I learnt here was straight: whilst I don’t suggest you wear this as an everyday bra (I wouldn’t feel at my most comfortable wearing it for a day of housework), I will say it’s worth the investment.  Don’t underestimate the Ultimate Plunge by looks, it may appear somewhat flimsy from a photo but in reality it’s a bra with serious backbone. Wonderbra asked me to choose an outfit to style my Ultimate Plunge bra with, and I chose this stunning navy all-over sequin playsuit by Motel Rocks.  With it’s deep V neckline and eye catching sex kitten appeal, this is the ultimate weapon of choice for a glamorous night out.