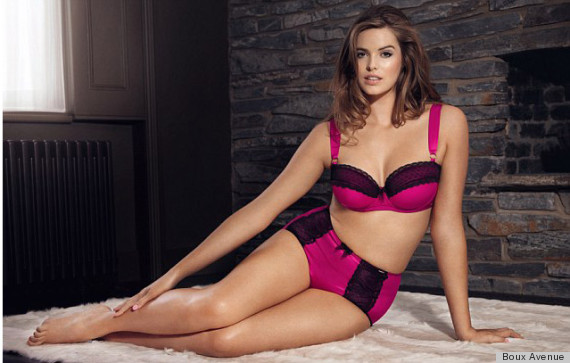 Curves.  We love them.  We hate them.  Gok Wan really loves them.  And often, we get curves all wrong.  The thing about curves is that they’re not size specific, yet time and time again the term is misused and abused to mock the bigger figure and defeminise the thin.  And while we debate the true meaning, we miss the real point that curves or not, we are what we’ve got.

Growing up, it was a regular reality that I was bullied for this, that and the other.  I was often picked on for my slim frame; my skinny legs, undeveloped chest and titchy waist, and ‘anorexic’ was a common name for me.  Fast forward a few years and I have the figure I thought would never come to fruition.  I’m not exactly skinny anymore but these days I have boobs, hips and a bum; a shapely hour glass figure I would call curvy.  But I’m not the only type of curvy.  Think Boux Avenue’s plus size hotty, Robyn Lawley who is a size 16.  Kelly Brook is another curvy kitten wearing a size 8-10.  Both are curvy yet classified differently.  A size 16 is typically vilified where a size 10 isn’t.  What’s going on?

There’s an article in the Daily Mail Online about the proliferation of the plus size market.  It opens with a discussion about celebrities who have been labeled as curvy, and when asked about the idea that model Daisy Lowe is curvy, from some, there’s laughter.  Again, when voluptuous Kim Kardashian is the next questionable curvy figure,  “no one thinks she is anything other than miniscule”.  Why is it laughable that these two women couldn’t possibly be curvy?  When did size decide whether a figure has curves?

Today another blogger friend has been dealing with body bullying on her own blog.  Despite her blog being there to help all women, size unbiased, she has been hit with a vicious barrage of vile hate speak, criticizing her feminine figure and larger bust.  People like this think it is okay to tread on others when seen as inferior.  This coming from a size 6 woman who thinks anyone a size 8-10 would look like ‘a whale in her social circles’.

No size is superior.  Our bodies, whatever the number, are ours to be proud of and we all have the right to express our happiness in our own skin.  It means not to poke fun at what may be the opposite that you are.  It means to make all women feel good about themselves, even if we’re not as meaty or skinny as we desire.  It doesn’t mean that being bigger you have the authority to officially label someone else’s body, as it isn’t acceptable for a thin person to make someone feel like crap.

Curves aren’t exclusive of the larger woman, and not all larger women can lay claim to being curvy, as any other body shape and size can and can’t.  But what’s most important – if we could even forget the term curvy exists – is we’re all women, practically non of us are 100% body confident and we should support each other, not pigeon hole and point.