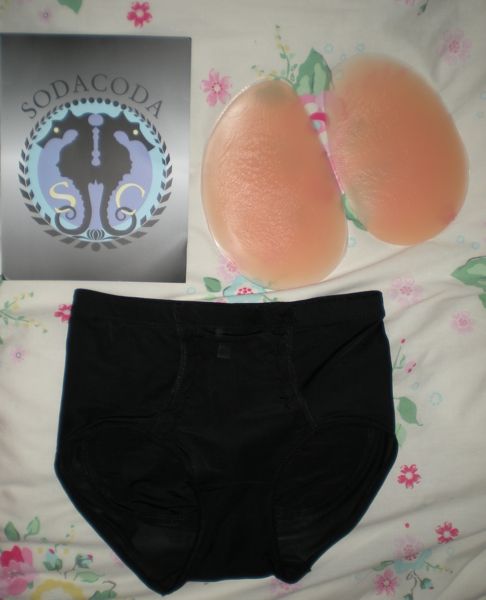 Until recently, I’d never considered shapewear before.  Padded bras with push up effects were as far as I’d been close to and anything in the territory of slimming girdles would be obnoxiously overboard.  So when online lingerie and shapewear retailer, Sodacoda, contacted me recently, my mind was open although a little apprehensive about something I felt didn’t affect me.

Sodacoda sell many recognisable brands but also produce their own lines, including the shapewear items.  I particularly found intriguing the fact something called a ‘bum bra’ existed.  I never in a million years thought anything related to a woman’s derriere would feature in the realm of shapewear with the consensus of boosting and drawing attention to that region.  So many women have a complex about their bums, so why the fuss – and the need – for bum boosting?

I was sent two pairs of butt enhancing pants.  The Silicone Buttocks Padded Pants is a black brief which looks very much like a typical shapewear brief with its deep cut leg and front panel.  They’re a really soft, slinky fabric which make them comfortable on the skin.  The sizing comes up extremely small, with my usual size 12 making me an XL and even then I found them on the small side. Now the crazy bit – silicone inserts!  I thought these were just made as bra chicken fillets but no, these larger, flatter versions are created to boost your bum shape.  There are two pockets on the inside of the pants where you slide in the pads.  I wasn’t sure whether I’d put them in the right way or not (I figured I had).  To be honest, I didn’t see much of a difference.  I have a curvy bum anyway so it was difficult to judge but I guess it made a firmer appearance.  I did notice how the silicone pads made the pants very heavy which was a downside to wearing them. The second pair of briefs was the Bum Bra.  I wasn’t expecting it to be in the form of shorts but it was a pleasant experience.  They aren’t sexy at all but the comfort factor was up there.  The fabric is a quality thickness with a flocked pretty floral design and edged with lace.  The sizing was spot on with the medium being a good 12/14. Where the bum bra works its magic is at the reverse – the scary back of the pants where your entire bum cheeks are exposed!  This was a very weird feeling, one I didn’t much like.  I felt as if I was wearing some form of kinky wear which were far from attractive to look at.  I’m not too sure what the purpose of such pants would be for.  If purely for lifting and not for exposing like a cleavage enhancing bra (which would be strange) then I would so much more prefer them with the bum encapsulated.  A whole, intact brief with no baring holes would be far more appealing – and warm. I guess I’m not ready for embracing shapewear yet but it seems the world is.  Bum enhancing underwear has become the new craze, believe it or not, so if your bum isn’t as pert and cheeky as it could be, don’t lag behind the crowd and become the butt of all jokes.  (Sorry! lol)

An excerpt from hilarious Bob’s Burgers which sprung to mind…