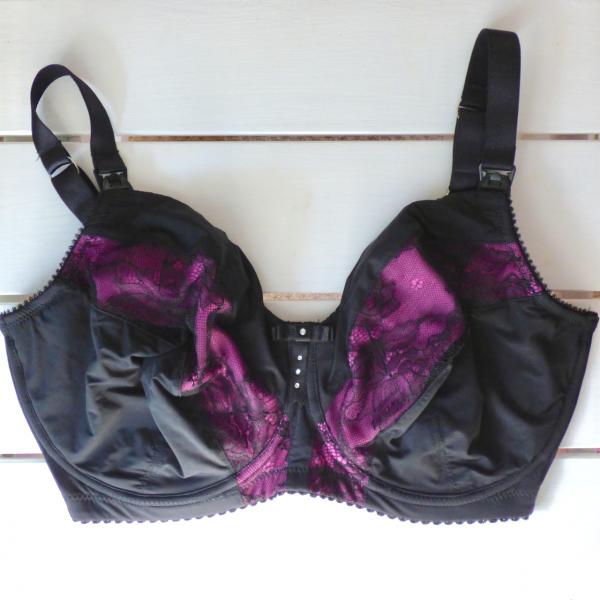 Maternity lingerie can be a case of ‘needs must’.  Not everyone relishes the idea of wearing it with many women reluctantly choosing the pregnancy bra out of necessity.  So, it’s fair to say maternity bras have a poor reputation for being frumpy and ugly.

But, regular lingerie doesn’t address the needs of the pregnant bust: it isn’t as forgiving, as comfortable and lacks the functionality if you’re wanting to nurse.  A supportive bra that can take you through the pregnancy trimesters – and actually look good – can make surviving uncomfortable breast changes a little more bearable. During the first four months of my pregnancy I’ve spent much of my time chatting with other pregnant ladies and underwear has been a hot topic of concern.  It appears not many women are happy about the lingerie on offer, with an almost fear of embracing a maternity bra for the perception of frumpsville.  I have to admit, I’ve seen some depressing bras, only made worse by the poor offering of fuller cup sizing.  So it’s a god-send when you find a brand that caters for all the above, and I can assure you, maternity lingerie needn’t be such a frightful topic.

Hotmilk Lingerie is unlike many maternity brands I’ve encountered so far and doesn’t ask you to compromise.  The first thing I noticed about Hotmilk was the look of their lingerie and how it managed to resemble more ‘regular’ lingerie than that of maternity.  Collections featuring sumptuous fancy detailing and lace – this wasn’t the type of pregnancy bra I was familiar with. The Lure flexiwire nursing bra is perhaps the most exquisite, and dare I say sexy, maternity bra in the range.  In a matt black soft microfibre with a deep panel of lace overlaid a fuchsia pink base and trimmed with diamanté jewels at the central bow, Lure makes for one special bra.

Lure is a balcony style, nursing ready bra with ‘flexiwire’ underwired cups.  Its design is much like a regular bra  – no broad straps and super slim wiring – only hinting at its breastfeeding capabilities with the discreet clips to the fore. The stretch upper cup fabric has a narrow elasticated band running underneath, which is a clever feature.  It means that not only will the cup fabric sit snugly against your skin but it’s enabling the prospect of growth; if and when your breasts fill out, the bra won’t be regimented to the one fit and will instead adapt to you.

Flexiwire has become my new favourite bra feature simply because its the best of both worlds: the firm shaping ability I love (and expect from my usual bras) while being breast tissue friendly, adjusting to breast changes without the rigidity of a standard metal wire, and not interfering on my boobs’ development.  Lure’s wiring is narrow which means it isn’t overbearing but enough to do an amazing job.

The 3 hooks wide band features a longer than standard 6 hook extension fastener, enabling the wearer to easily adjust as the rib cage expands through pregnancy.  This is a great added benefit because it potentially allows for much more wear out of the bra, one you can fit happily in the earlier days as your body grows and continue to wear beyond the birth whether you choose to breastfeed or not. Lure feels so well tailored to my shape.  For a 32 band, it’s impressively tight and the bra sits very central to my body, deeply cut around the armpit for lots of comfortable movement.  It doesn’t feel wide or set apart and the straps are well positioned on my shoulders, making it a very good bra for the more petite frame or if you have a close set bust.

The flexiwires conform to your body so there’s no rigidity, but I do experience some digging into my skin from the wires at the outer part of the cups.  If the wires were metal I’d be able to bend them slightly to fit around the curve of my body, but it’s not possible with the flexiwire.  It isn’t ideal as there are pressure sores at the end of the day, but because the flexwires are softer by nature I’m not aware of any nipping.

The generously sized fastener means I have plenty room to play around with.  Right now I’m wearing the bra on the third hook, so about in the middle.  Had I started wearing it earlier on in my pregnancy I most likely would have had it tighter, and with the probability my ribcage may yet expand further, I’ll be adjusting back along the band again, so there’s ample flexibility in the band.  This is where fitting for a 32 band as opposed to a 30 works in maternity wear, as you need the space to grow into. Hotmilk’s Lure is such a gorgeous bra, and one I’m massively glad to have in my maternity lingerie arsenal.  There’s some mourning to be had over my loss of ‘normal’ lingerie, and Lure neatly fits the hole I feared I be missing.  I love that I get to wear something a bit sexy still.  It just doesn’t resemble maternity which is nice to have the choice of alongside my comfy, if a little uglier underwear.

What do you think of the Hotmilk Lure bra?  Do you find maternity lingerie usually boring and unexciting?  Maybe you think maternity underwear shouldn’t be sexy?  What are your thoughts on the availability of nursing and pregnancy bras?