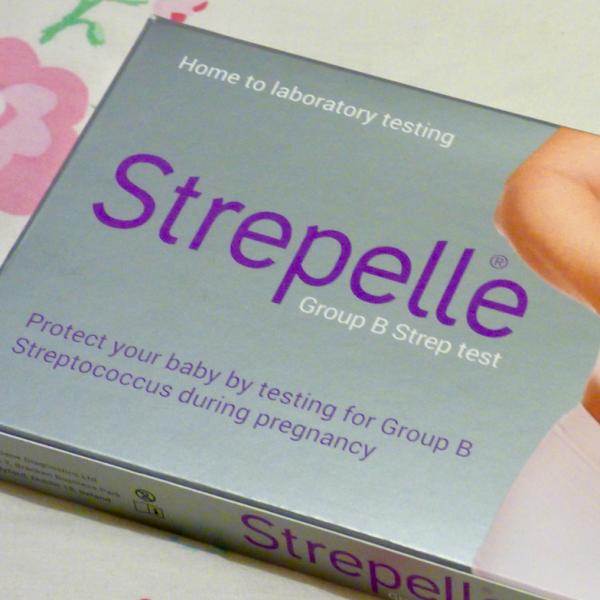 Group B Strep And The Strepelle DIY Test Kit

If pregnancy doesn’t come with enough reasons to worry the whole nine months long, it turns out there’s another one to add to the list.  Your midwife has probably never mentioned it, the NHS doesn’t routinely test you for it, but it’s one of the most serious infections to threaten the life of newborn babies.  So what is it and why, if it’s so serious, is nobody doing anything about it? What Is GROUP B STREP?

The first time I heard about Group B Strep was when a sales assistant happened to tell me, quite randomly, about her chance diagnosis when she was due to give birth.  She went on to say that had she not been tested her baby could likely have died.  Now that freaked me right out.  No mum wants to put their unborn child’s life at risk, and being pregnant myself I couldn’t understand why I’d never heard of this before.

Doing my own bit of research I found it quite worrying the more I read.  Group B Streptococcus (GBS) is a bacteria that, according to charity Group B Strep Support, around 20% of all women carry, and without visible symptoms it can easily pass onto a baby whose immunity cannot fight it.  The presence of Group B Strep bacteria in itself isn’t a danger; it’s completely harmless to most people should anyone be such a carrier, but Group B Strep Support stress that if that carrier is pregnant then the bug needs to be addressed accordingly.  Thankfully it is treatable with antibiotics if necessary, but it’s knowing you have it before it reaches your baby that’s the problem.

Personally I try to avoid reading horror stories about births and babies, but when the risk of something so potentially dire could be easily remedied, I can identify with the many women who are taking matters into their own hands and investigating the new DIY Group B Strep test that’s recently arrived. I was recently approached by Strepelle who have just launched their Group B Strep test kit – the enriched culture medium, or ECM, ‘gold standard’ in testing Group B Strep – to the UK public.  As I was now into my third trimester of pregnancy, I felt it could only benefit me to get involved.  Being part of an online baby birth group I began hearing discussion about a Group B Strep news feature on ITV’s This Morning, and it made me realise just what a big deal this new DIY kit could mean to expectant mums.

I didn’t really know what to expect of the kit so after it had arrived in the post and I’d taken a brief look through the package, I admittedly felt daunted by the seriousness of the test.  With a form to fill in, barcoded stickers to apply to test tubes and swabs that you have to hold at just the right measurement while ensuring not to touch, it suddenly became the scary procedure I’d rather my midwife did.  A professional knows how to carry out medical tests because they do them all the time whereas I do not, and the thought of getting just a fraction of the instruction wrong meant the difference between a reliable sample and an invalid test.  Could I trust myself to complete the tasks properly, and could I trust a returned negative result?

The STREPELLE TEST
The Strepelle kit comes in a compact silver coloured box about the size of a box of waxing strips.  Its contents include: an easy to read instruction leaflet, two identical sterile swabs, a form with labels and a freepost plastic envelope to post off your samples to the lab.

The instructions are pretty simple to understand, if awash with ‘important’ directions that you must abide by to ensure a properly administered test.  Hold the swabs at the precise position, never touch the end of the swab, and make sure you post at the right time of week so your samples don’t deteriorate.

Two samples are to be taken by swabbing the inside of your vagina and bottom.  It doesn’t matter which swab vial you use to do which, but the method of sample collection differs for both.  Don’t worry about it being gross or embarrassing to do, you’re not poop scooping and it’s not as invasive as having a smear.  All you’re doing is swooshing a big cotton bud into each orifice for a matter of seconds. I put some of my concerns to Group B Strep Support and this is what they had to say in clarification:

“GBS carriage doesn’t require treatment at all. It’s normal and you shouldn’t be given antibiotics to clear it. When GBS carriage is detected, Mums should be offered IV antibiotics asap once labour starts to reduce the chance of her baby developing GBS infection, not as treatment for the GBS carriage at all.

“GBS carriage isn’t static – it can come and go. However, research shows that this doesn’t happen on a day-by-day or even week-by-week basis. The result of an ECM test is hugely accurate at saying whether GBS is present or absent at the time the samples were taken AND that this is likely to be the same for the next 5 weeks. After 5 weeks, your GBS carriage status becomes slowly less likely to be the same as it was 5 weeks previously (though it doesn’t fall like a stone!). So this is why, although an ECM test is hugely accurate at whether or not you’re carrying GBS when the samples are taken, we talk about how predictive it will be for your GBS carriage status in labour – which in all likelihood will be in the next 5 weeks when the samples are taken at 35-37 weeks of pregnancy. All that really means is how likely you’ll still be the same as the ECM test reported when you go into labour during the next 5 weeks.

“Unfortunately one of the myths we hear repeatedly is that GBS carriage comes and goes so often it’s not worth doing anything about. It’s simply wrong.”

There’s so much discussion on the subject of Group B Strep lately, frustratingly much of which confuses with conflicting information.  The NHS believe it’s unnecessary to test every single expectant mum for the presence of GBS, whereas research proven by countries that do routinely test all pregnant women appear to show the opposite effect.  When women find out too late that they have passed GBS onto their newborn child, it seems to be a case of closing the gate after the horse has bolted.  While many are treated successfully, too many babies sadly don’t survive the bug.

Initially I was skeptical the test could give me an accurate answer either way, but this belief that the result can change so erratically come the moment of labour, I’m told, is wrong.  While I thought I didn’t want to attract unnecessary stress in the lead up to the birth, with pregnancy already being one big worry, I most certainly don’t want to risk infection crossing to my baby.  Now I’m entering my 36th week of pregnancy,  I feel the urge to re-evaluate my initial caution and submit the test for myself.

As a first time mum, I can see the appeal in taking control of your unborn baby’s health, and if a simple £40 test is all it takes then you haven’t much to lose and the peace of mind can only be worth it.

What do you think of the new Group B Strep DIY test kit?  Do you think it’s a good idea to test at home or do you think it’s the job of the NHS?  Should all pregnant ladies be routinely tested for Group B Strep, or is it just another worry for stressed out mums to be?  I’d love to hear your thoughts and experiences in the comments below.