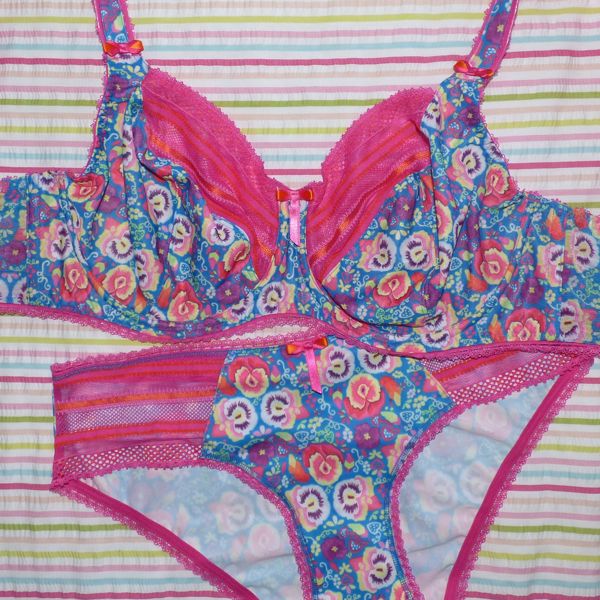 A Carnival of Colour with Freya Parade

Never underestimate the power of fantastic lingerie.  We all have our own ideas of the perfect lingerie set, but looks and fit are inarguably two of the most defining points that make lingerie truly amazing.

Colour is a massive influencer when I’m lingerie shopping.   I love bright colour; when I know I’m wearing something really vivid I feel like my energy is feeding off it.  Exciting patterns and shades aren’t pointless when they’re sending a sense of positivity through my whole outfit.

The most recent collection to come from Freya lingerie has dropped and it’s a dazzler.  Parade is a cornucopia of colour: clashing shades and a busy print, enthusing a buzzing vibe. The Parade line consists of the choice of three bra styles and three co-ordinating brief styles.  Ranging from a D cup to a K, this collection caters for a wide audience.  It has a folklore inspired print featuring flowers and doodles against a deep blue base.  Hot pink lace combines with accents of zingy orange to create a fresh, juicy colour combination.

Usually I am most attracted to Freya’s longlines but actually this time I was especially taken with the design of the balcony, which I find just so stunning.  The plunge balcony, unlike the longline and the half cup, has the addition of deep lace paneling to the cups, and the striped tone on tone effect just sets the design off with a pop. The classic brief again features the heavy use of the lace and it’s just as eye-catching and well styled as the partnering bra.  Briefs often miss out as the poorer relation in lingerie sets so it’s fantastic to see this brief fair so well.  Comparing it against other Freya briefs that don’t feature lace, it wears more softly around the hips, allowing for increased comfort and freedom.

Without confusing the review of Parade I wanted to draw comparisons against a very similar Freya bra, to show just how different similarly styled bras can be.  The Doodle collection, which was released a short while ago, bears an uncanny resemblance to Parade, with it’s warm tones and pattern base, but put the two designs side by side and the differences become interesting clear.  While both bras are unpadded balcony, Doodle is limited to an H cup (Parade is up to a K) and is designed with a lower centre gore.  It also has slightly narrower straps, fastens on two hooks, rather than three, and dare I say it, somehow a shorter band.  So, it’s always worth really researching the structural make up of a bra before investing as these minor variances can make all the difference regarding fit.

I was excited about bringing Freya’s Parade to the blog purely because of its aesthetics, but since I’ve been able to wear the set and properly test how it wears, I’ve been confirmed that this is an immensely good bra to trust – so be sure to check it out!

What do you think of Freya’s Parade?  Do you like bright colours or do you prefer a more classic or demure design?  I’d love to hear your Freya bra experiences.