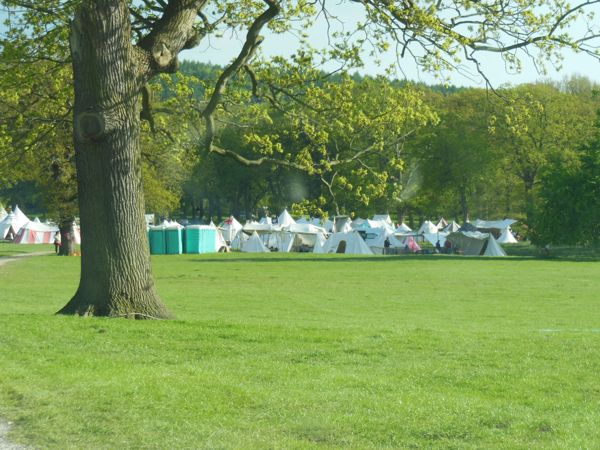 It’s not everyday you’re given the opportunity to step back in time and experience life as you never knew it.  When I received a pair of tickets to attend the first ever Medieval Banquet held at Harewood House near Leeds, I was pretty excited at the prospect of living life in the middle ages and went armed with my trusty 21st century camera to document my life as a peasant wench.

Our drive down to Leeds was a pleasant one; the sun darted between threatening clouds as we passed sparse woods carpeted with vibrant bluebells.  It looked so pretty.

On arrival at the estate of Harewood House we drove through camps setting up tents and fires.  These were the folk preparing for the medieval fair following the banquet, which was to be held over the bank holiday.  We located the car park (merely an allocated spot in a bumpy field) and set off on foot into the medieval territory.  Handing our tickets over, we suddenly found ourselves in the high middle ages. I’ve never donned fancy dress in my life (besides the obligatory primary school plays) and this occasion certainly called for authentic medieval dress.  Devising my own outfit was surprisingly fairly simple; I knew I had a burgundy raw silk gown hanging in the wardrobe which was still waiting to be worn, and I decided to team it with a corset, one of deep indigo silk, and a tassel edged emerald green scarf that draped around my shoulders.  My old natural coloured canvas boots finished off my look perfectly. Mr BB’s outfit took a little more effort.  The obvious choice was a knight and a Templar Knight it was at that.  After a week of arduous sewing the defender of the realm’s costume was complete.  I’d created a tabbard with appliqued cross emblem, faux chain mail and a handsome red cloak.  Worn with a pair of brown trousers and black boots, and brandishing a metal tone sword, Mr BB was knight ready! Heading toward the main hall tent which was to host our banquet, we joined several other groups and couples, some in authentic dress, others looking out of place (and quite silly) in modern day dress, and we were greeted by tavern wenches who offered us alcoholic beverages.  I took a chalice of cider while Mr BB opted for a lager. While we stood out on the grass in the gaze of the lowing sun, we admired others’ costumes and were entertained by a maiden on stilts, a jester and manned stocks that beckoned folk for shaming.  I had been a bad wench and swiftly locked in the stocks! It wasn’t long before all we peasants, nobles and knights were invited to watch a display across the field.  There was the odd bale of straw alongside a cordoned off area which some people sat on, while others stood or sat on the grass (like we did.)  We enjoyed displays by our host knights and king who showcased their horsemanship skills, or rather showing off abilities to ride backward, stood up and bounce on and off a galloping horse.

By the time we were all directed into the large tent my tummy was rumbling – I was so ready for a banquet of kings!  Inside the tent lay three long tables headed by the top table prepared for the knights and king.  Mr BB and I found a table, taking a pew – literally – and sat before our wooden plates.  There were chalices, spoons, jugs of cider and the odd pot of apple sauce and chutney.  While we waited for the food to be served I decided to appease my hunger and have some bread.  The long tables appeared to be sectioned in sixes, which the sauces and drinks were to be distributed between.  A bowl of three pieces of bread told me they needed to be shared so I split a chunk between myself and Mr BB. The starter of pea and ham soup arrived in mini pots, it’s consistency too thin to be eaten with the large wooden spoon and too thick to drink, but it tasted lovely.  I’d wished I kept my bread to dip into it and mop up the peas I couldn’t drink.  Some time later, between several trips to the portaloos and a few more glugs of cider, plates of game pie were put on our tables alongside a bowl of dressed mixed beans.  I’d never tried game pie before and I can wholeheartedly say I won’t be eating it again.  Even the juicy chutney couldn’t improve the taste of the dark meats which had a livery taste and resembled offal.

While we all ate and chatted amongst ourselves in our pairs and groups on the tables, it was apparent the head table were keeping in character.  It was a little too noisy and not prominent enough to figure out what was going on half the time.  The knights would argue, slam down cider (which was probably water) and proceed to brawl and challenge each other to games and fights.  Mr BB found himself in an early ‘fruit machine’ game only without the machine at the top table, somehow losing our table’s alloted cider jugs which he managed to get back later on.  We found the entertainment was sporadic and left us hanging around waiting for long periods.  It didn’t seemed timed well, probably because it took so much time to feed everyone and when the knights were in entertainment mode it was most likely in keeping with the first table, so our far table were trying to eat whilst catching a glimpse of whatever was going on in the room. The grand arrival of the feast star – the roast whole hog – was heralded by music fanfare, and the displayed pig was carried around the room for all eyes to see.  I’m one of those annoying meat eaters that worry about animal welfare and adore living animals and yet have no problem digesting them.  Well, seeing the charred pig wasn’t the best sight I could wish for but I looked forward to devouring him all the same.

Again we found ourselves almost twiddling our thumbs waiting for the hog, and when the wench waitresses brought it to the tables it was a fairly trumped up disappointment.  We received a plate of carved up meat with a little crackling on top of it.  There really wasn’t much to share between us and I felt intimidated taking any of it.  I was quite shocked that we weren’t served anything to accompany the bits of pork so all we ate it with was a spoonful or two of beans along with the chutney and apple sauce.  Food was an immense disappointment.  Surely the gentry didn’t eat measly meals like this?  It was more a peasant supper rather than a king’s banquet. We were served bowls of apple pie and had a little jug of cream to pour over it.  It tasted quite nice, nothing fancy though but obviously homemade. Platters of cheese and crackers were handed out and I’d barely eaten one cracker when the host encouraged us to go outside and watch the knights ‘fight it out’.  I grabbed a few grapes and we all scarpered out into the dimming light.  Sitting back down beside the display areas, we watched a sword fight and were treated to fire blazing skills of archery, fire breathing and the poor horse who was meant to jump over the fire fence and caved on the act.  The evening came to an official close when the host invited everyone to stay and dance in the tent and drink (which was a meager attempt of getting a few more sales in before the end of the night.)  So Mr BB and I decided to call it a night and headed off to our waiting steed…

My Conclusion
The medieval banquet was a brilliant concept, we loved getting kitted out and making ourselves head back into the middle ages.  Seeing most people dressed up made it an exciting experience and it was like a step back in time seeing all the camps set up for the night.  The banquet was a first for the Harewood House annual medieval fair, and there were definitely certain issues which should be improved on for a better experience next year.

But what I did like – the talent acts involving the knights on horseback were awesome and we thoroughly enjoyed watching the archery and the fire displays.  The stocks were a fun experience and the medieval actors were good fun to watch.  I very much loved wearing my own outfit too and having my very own knight for the evening!
The banquet evening cost £49.95 per head which was in my opinion, steep.  If the banquet was to run for the second year the food menu would have to be improved on and the entertainment tweaked if Mr BB and I were to return to the middle ages of Harewood.
Becky x