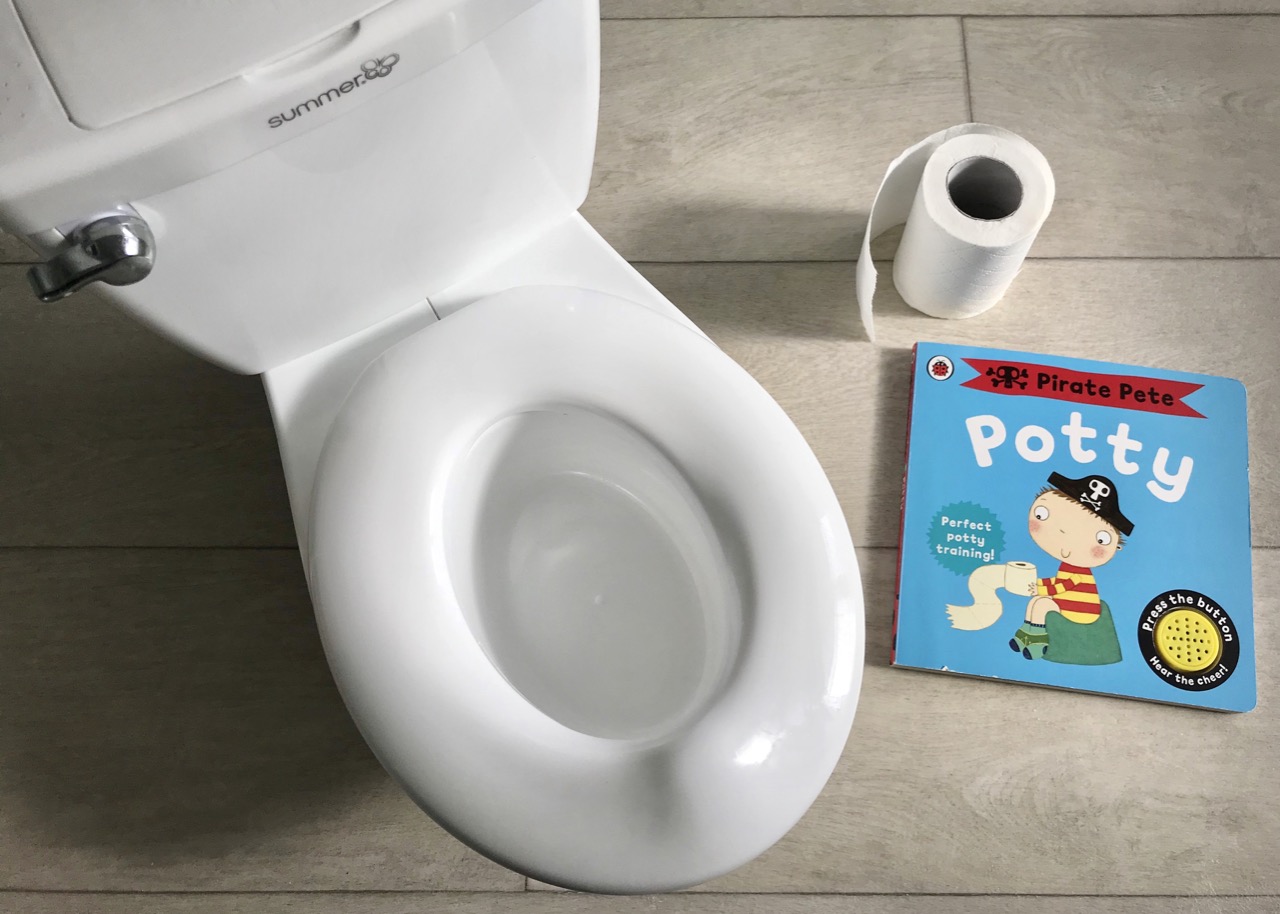 Lockdown Potty Training: When it Takes a Crisis to Get the Job Done

Nothing beats the thrill quite like a new milestone. Baby’s first crawl. Baby’s first word. Toddler moving into his own big boy bed in his own bedroom (okay, that landmark I mourned more than I rejoiced). But, potty training is a whole new game – and it’s the one milestone I have not been mentally ready for.

When I started writing this post, we were five months into Reuben’s potty training. So now we’re coming up a year since we began – yes, you read that right, a year – we’ve almost resigned to giving up and keeping the little man in nappies forever. Almost.

As hard as this toilet training lark is, I’d be bonkers to even think nappies are the easy answer. All a toddler who’s outgrowing his nappies does is fill them up with big pees and I swear we’re getting through more nappy pants in a day than we used to.

But nappies do have their bonus. As we’re still some distance from evicting the nappies, we’re yet to experience the toddler-in-pants travel anxiety; emergency stops for a wee after you’ve just set off or whipping out a collapsible potty at the curb side. *shudder*


So how are we 10 months into potty training and still not done?


To be honest, I think it’s been a mix of anxiety, possibly laziness and just not being ready – and I don’t know who’s exactly to blame for what.

Bucking the trend to potty train in a week or by 18 months, or another time limited deadline, we decided from the very beginning that, for Reuben, we’d keep things casual. We didn’t want to pressurise into switching from nappies to pants, we just wanted to stay chilled about it; follow his cues. Let him decide when he was ready to quit the nappy.

I imagined, obviously wishfully thinking, we’d nail it over a long, hot summer of nappy free days and free-peeing in the garden. But when summer came and went, I knew this wasn’t going to be as simple and stress free as I’d thought, and it certainly wasn’t going to be fitting within my ideal time frame. Getting Reuben moved over into “big boy pants” wasn’t going to be easy.

It’s a little bit laughable that, long before we needed any potty training equipment – in fact, even before Reuben was born – I’d bought a potty and a toilet seat. As if my meticulous preparation could bear any influence on my forthcoming parenting performance. If only!


Potty business began all the way back last Spring.


I clued myself up on the signs that would suggest the readiness to potty train – the longer dry spells between wet nappies, having bigger wees in one go, being aware of the need to pee and/or poop, awareness of and even feeling the discomfort of being wet, and just being really interested in what goes on in the bathroom.

And he started doing this thing where he leaves the living room to stand in the hall, shutting the door behind him so he has privacy while pooping (in his nappy pants). The cues were clearly there: this boy knew what was happening in his body and nappy, and was ready to take the next step.

And that’s when the potty was revealed.

Technically there were three and then some; two conventional potties for downstairs and a mini ‘toilet’ potty for the bathroom, and then a training seat option for the toilet. We even upscaled our downstairs toilet to one that incorporates a training seat for small bottoms. We had all bases covered. (Except outdoor potty business – we’re not that brave yet.)

To begin with, potty training consisted of the potty simply being visible. I didn’t want to press the idea of suddenly using a potty, rather we wanted the potty’s presence to be intriguing and worthy of taking a closer look.

It wasn’t long before Reuben was excited to give the potty a try, and left his first little wee. Two days later he tried it again, this time sitting for longer and passing a bigger wee. “I did it!” He’d say proudly to our applause. And each and every time we’d get a wee, we’d praise. The mini toilet, poised beside the big bathroom toilet, became the location of the nightly pre-bath wee, and he’d use it, proudly, every time. The concept of weeing in a potty was getting through.


I don’t know if I’ve been too pushy (or not enough) with the potty.


Maybe that’s been my downfall, because before long, the idea of peeing in a potty wasn’t new and exciting anymore. The novelty had worn off. Pottying was now a load of poop.

Over the following months I resumed my air of nonchalance. It wasn’t critical to potty train just yet, I’d tell myself. Reuben was yet to head out to nursery so the peeing in the potty (and miniature toilet) became a target I’d “deal with later on”. So I just let Reuben do as he pleased; use a potty when he wished and carry on wearing nappy pants. I guess it suited us all.

But last month Reuben turned three and with his nursery placement on the horizon, the urgency to potty train has surfaced. I don’t want him being the only one wearing nappy pants in the classroom so I have to tackle it now.


Of course, all that was before the Coronavirus arrived.


Our lives and plans have been turned upside down and hung up to dry. Schools and their nurseries are closed. We can’t go anywhere. Life is uncertain and a heck of a lot more stressful. But one thing this virus has gifted us, if I can find any positivity amid the chaos, is time: long days at home and (too much) time to burn.

So here’s the new idea – I’ve been mentally preparing myself for it – it’s time to accelerate this potty training business while we’re in lockdown.

Over the past few weeks we’ve been moving gently toward the goal – out with the nappies and in with the pants. This isn’t going to be easy so we need to break apart the day and our routines to see where we need to implement the changes.

Getting a child to understand they can’t just ‘go’ for a wee right where they are, in a nappy, is essentially the crux of it. So we need to do away with the nappy and make Reuben aware of his body and more in tune with his toilet habits.

I know Reuben’s physically ready; when he dislikes the feel of his wet nappy or he’s filled it to the max, he pulls it off himself.

So Reuben’s spending more time nappy free. At the moment, it tends to be late in the day after tea, where instead of a nappy change we’re allowing a bit of “nuddy time”. He likes this time a little too much, and the result can go either way on any given night (pee puddles at the back door, on the rug, even on the sofa) but I try to be mindful that ‘accidents’ are part of the learning process, and we’re still heading in the right direction.

The nappy free periods definitely need increasing, so we’re gonna have to encourage it more often.

To be fair, we do start the day with a dry bedtime nappy. Using the potty toilet first thing is something I’m pushing for but so far I’m failing on that one.

The downstairs potty is in full sight, but I’m trying to remember to move it closer to wherever Reuben is so he can be aware of it (hopefully) when he feels the need to pee.

Poop is way further down this potty training road, for sure. Reuben has strict opinions on that suggestion and he isn’t open to negotiation. But rather than forget it altogether, when he has filled his nappy, which is the way he’s still currently comfortable, we’re taking him into the bathroom to flush the poop away down the toilet and to wash our hands, so he still learns the concept that that is where poop is dealt with.

When I feel Reuben’s ready to move on after plenty bare-bum time, we have the pants at the ready. Lots of pants. Although I’d already taken it upon myself to invest in multipacks of ten, I asked Reuben what pants he’d like, and he requested Hey Duggee. After a ridiculous amount of time (and by that I mean weeks and weeks of hunting online and in store where Asda were constantly sold out) we finally chanced upon some in Sainsbury’s sale. I don’t think I’ve ever been this thrilled about an under pant purchase in my life, and this is me being a former full-on underwear blogger.

In the meantime we’ve been cracking on with potty books. Not potty training books for me, oh no, I’m talking books about potties and animals going to the loo. A few to recommend, we bought the Pirate Pete Potty book and a Pip and Posy book called The Little Puddle. Very straight forward and broach the trials and tribulations of potty training with compassion and positivity.

And really, that’s probably the secret to successful potty training. Lots of positivity, lots of praise, plenty chances, being kind. And actually trying and doing it.

Deep down I know my own issues play a big part in why we’ve not tackled the potty training yet. I struggle with the mindset of perfectionism and accepting failure, and my anxiety tends to pour out (no surprise) over emotionally charged situations such as controlling peeing and accidents. The fact is, I can’t control it, I need to go with it. Maybe I need to consider that what I fear, Reuben may be fearing too? Or feeding off my anxiety? And I don’t feel that’s fair on him.

So here goes. Potty training lockdown. I’m crapping my pants! But with this social distancing and isolation happening, it would be a wasted opportunity not to try and get it done while we’re pretty much locked down at home. And just maybe, our lackadaisical approach will finally pay dividends.

How has potty training gone for you? Are you still in the throes of pee puddles everywhere or has your toddler nailed it? Let me know your tips how to train with as little stress in the comments below.