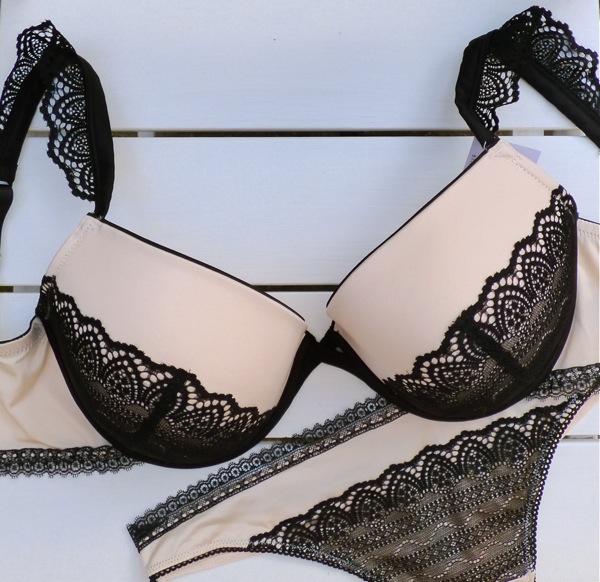 When the Wonderbra Glam was released it took the iconic lingerie label into boudoir territory.  Boasting a more luxurious aesthetic with a vintage feel, the Glam’s sumptuous design offered a new take on sexy femininity.

This month I had the opportunity to take a closer look at Wonderbra’s Glam range; firstly the balconette bra, and now the latest style: Glam Cleavage, which I’m going to compare with the former. Moving away from the balcony shape, Glam Cleavage takes on the best known Wonderbra look; the push up.  Its deep plunging neckline crosses at the gore for a minimal centre point and pushes up the bust using lower inner cup cushioning for the ultimate voluptuous shape.

This stunning design is fancifully feminine set off against an understated colour palette.  The black lace plays a striking contrast against a cool, champagne pink tone allowing the intricate scalloping and detail to assume centre stage.  The lace overlay adorns the lower section of the smooth line cups, and trims the straps with a flirty capped shoulder. While the same scallop trim lace features on both the balconette style and the cleavage bra, there are huge differences in their make-up.  The cleavage bra’s pale pink is a muted affair without the satin sheen of the balconette, and the padding within the cups are completely different.  In the cleavage bra there is less sizeable cushioning by a huge degree, which in my personal opinion is better for a fuller bust.

Interestingly, the band is marginally narrower on the cleavage bra, with 2 hooks instead of a row of 4, although the width of the fastener is almost the same, around 1/2 cm less. The straps are completely different on these two Glam bras.  I would say I prefer the balcony bra’s straps as they are broader.  They’re also constructed more like a regular bra strap too, as the cleavage bra’s straps feature two different fabrics: the adjustable section is a satin strap while the top part (that the lace runs along) is more soft touch microfibre.  They’re still comfortable straps, just narrower.

I again found the band was slightly on the large size, and the cleavage bra’s elastic is similar but a fraction wider than that of the balconette’s, so there’s some improvement in the level of support.  It has a bouncy fit though, which felt too loose to trust! If appearances are anything to go by, it actually looks pretty amazing.  If you’re looking for a projected and lifted cleavage, it certainly delivers.  I like that there isn’t much of a central gore as so often that can act as a wedge.  I have naturally close boobs so they’re really kinda free to behave as they please, and that sometimes comes as a relief! I would quite like to see Wonderbra tailor their larger cups to offer a higher degree of support.  The elastic isn’t the best, and this bra is crying out for a bit of rigidity in the band.

But – I love the design of this bra with it’s delicate lace trimmed straps and daring plunge; it’s beautiful and completely provocative at the same time. The large size thong was a perfect fit, which again would equate to a 14.  The fabric is silky soft, so feels comfortable to wear, and the waist band has gentle elastication as it works with the overall stretch fabric.  A panel of overlaid lace is sewn onto the front, which provides a little extra coverage and looks sumptuous too.  Many times the brief option of a lingerie set is neglected in the design, so it’s nice to find a perfectly co-ordinating bottom to it’s pretty better half.

Glam shows that Wonderbra still has the innovative streak with the desire to deliver the most alluring and sexy lingerie for the D plus market.  Considering the price point too, there’s a lot of design and decadent fabric for your money.

What are your thoughts on Wonderbra’s Glam range?

Do you like your lingerie more decadent, or do you prefer an understated look?