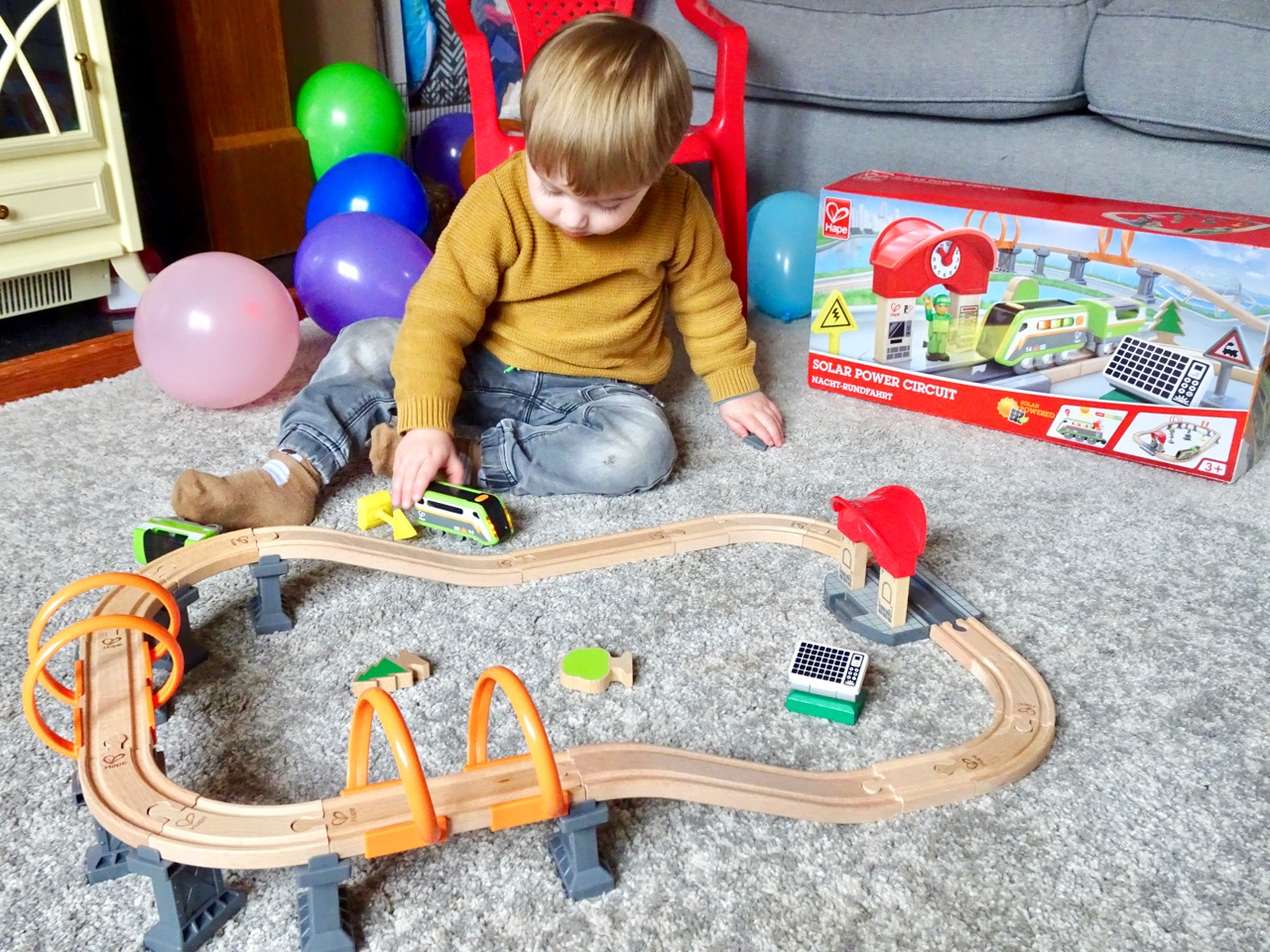 AD / THIS POST CONTAINS GIFTED PRODUCT COURTESY OF HAPE TOYS. ALL THOUGHTS AND WORDS ARE MY OWN.

Knowing what toys are worth buying can be a minefield. If you’re not figuring out age suitability and value for money, you’re hazarding a guess what your little one will even enjoy playing with for five minutes, if at all. Timeless appeal and quality will always be sound investment, and STEM promoting toys that stimulate a creative mind with limitless opportunity – like a train set – is a good place to start.

Reuben has long been fascinated by anything with wheels – cars, tractors, lorries, not even a mobility scooter goes by without an admiring inspection. So when a play date over at his friend’s house introduced him to the wonder of trains, I had an inkling getting Reuben his own track at the age of two would be the perfect toy for him to grow into.

The Solar Power Circuit by Hape Toys is a brilliant train set that’s educational as much as it is fun. In a 37 piece box set, including various shaped track, spiral bridges, bridge supports, a station platform and stationmaster figure, it’s a classic train set combining the natural quality of solid wood with modern plastic, and technology at the heart of it.

While the train itself isn’t electronically controlled (which admittedly I did hope this was), it does boast a very clever solar powered functionality. With an inbuilt solar panel on its roof, the train can be charged up garnering solar energy, which in turn powers its own headlights. With the press of a button on the train, the headlights can be turned on or off, and via a second button, the energy indicator tells you how much charge remains.

Modelled on a more modern streamlined style of train, the six wheeled engine carries its own passenger carriage, whereby the stationmaster can be sat inside for the ride. Like similar child’s train sets, the Hape solar train set connects up to carriages and other trains using magnets, though Hape’s magnetic connectors are arguably superior because they swivel, producing an easier to manoeuvre train.

The set makes a rectangular circuit that is generously proportioned; there’s two thundering hill climbs that take you up, around and down, navigating through spiralled bridges and bringing you round to a platform. The plastic spirals are put into position on the track pieces on assembling for the first time, but you can play around and take them off if you fancied. The plastic supports which enable you to raise track up from the ground are simple to click track into, but if knocked can fall out of place, as can the track. The track – branded with the Hape logo – is sustainably sourced wood that feels quality and has well cut out connectors. And it’s compatible with most other wooden track (we also have IKEA and Lidl train track) so you can easily add on other train sets you may have.

You may also find other little trains will work on the Hape set. Reuben has acquired trains from all manner of shops, the kind that have magnetic connectors, wooden and plastic trains, and happily runs them around the track with his Hape solar train.

Of course what sets Hape apart is their commitment to safety, and as a result of their vigorous product testing against chemicals and the toddler prescribed hazards of chewing and biting, the Hape trains feel like they’re built to last. There’s no removable parts, the magnets are secure and the wheels are firmly in place, so I’m not concerned they may come apart like some of the cheaper imitations.

What I love about Reuben playing with his Hape train set is how he’ll totally commit himself to the game, packing away all other toys first before bringing out his track box with excited gusto. And he’ll remain – totally immersed – building up a new rail system, passing pieces to you to build together, adding track how he wants it to grow, really nurturing this genuine passion in him. Because laying track out requires you to consider how to get from A to B, it needs that extra concentration, making it a great activity to work the mind. Reuben’s an intelligent lad so will easily become bored and hyperactive if he doesn’t have the right avenue to channel his energy into. Amazingly, getting himself down on the living room floor with his track and his trains he’s started to fine tune his attention and his interaction while playing with others, and in the process, realising a genuine hobby.

Does your child enjoy trains? Do you find playing with train sets are a good way to properly entertain the little ones?