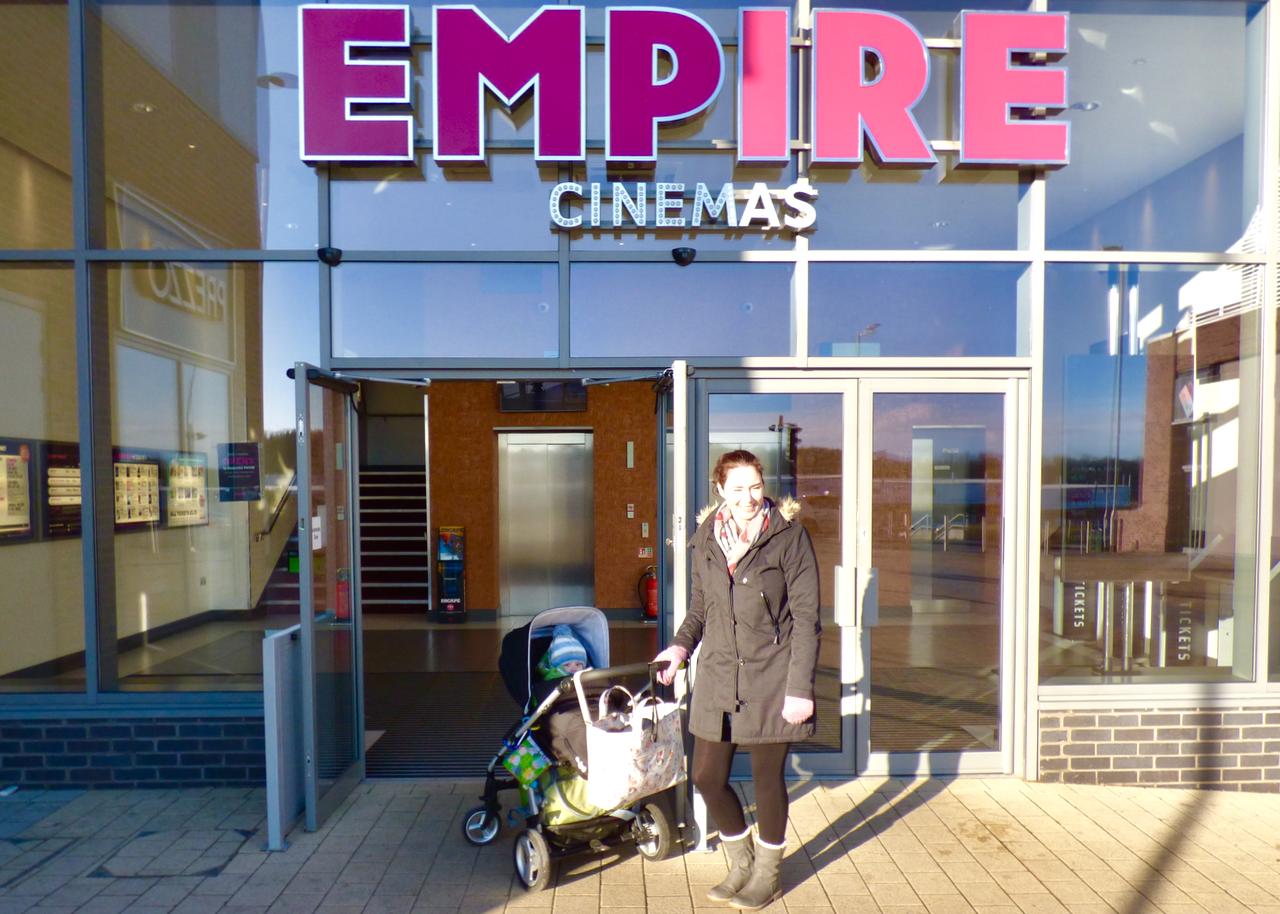 Date night was never a thing for us before we had Reuben; being spontaneous we’ve always liked to do things in the moment.  If we felt like going for a day out somewhere, we did.  If we fancied seeing a movie at the cinema, we did.  But of course once kids are in the picture, these spontaneous moments are very much a thing of the past.  You have to plan when you go places and some of those places you can no longer go.  Like the cinema – it’s not the place you take babies, right?  In the conventional sense, probably not, but when there’s parent and baby screening, you actually can.

I first heard about parent and baby screenings through some mum friends.  I was intrigued to look into it further but I was daunted about going along.  Even though it appeared to be something marketed toward mums with babies in tow, I was worried what it would entail and how it worked.  Where did prams go?  Would it be too loud?  And what would happen if (or rather, when) your baby cried?  The anxiety was too much so I put off taking Reuben most places while he was a newborn, but I always told myself I’d find out more about the parent and baby screenings.

Empire Cinema is our nearest multiplex cinema that boasts the kind of movie-going that we like: modern sound and picture, 3D, Impact and plenty screens with all the latest film releases for choice.  For the standard adult price of £5.95 with under 2s going free, Empire’s Parent and Baby screenings are billed as ‘a relaxing social environment… with the lights up and sound down to create a stress-free zone for you and your baby’ so I was keen to set a date and go see a movie for the first time since I was pregnant!

I was offered a pair of tickets to go along for a family experience in exchange for my feedback.

With Reuben now 9 months old and approaching Christmas, I was keen to make sure we shared some new Christmassy experiences as a family.  I saw the appropriately festive ‘The Man Who Invented Christmas’ movie in 2D was this week’s Parent and Baby Screening so I jotted it on the calendar to remind me.  As Empire typically arrange the screenings around midday, it was convenient that this showing was a 1pm start.  We arrived in good time to purchase our tickets and secure some good seats (comfy premier seats, no less) – not that we needed to rush as it turned out we had the screen to ourselves!

Speaking with the guy processing our tickets, I was disappointed though.  He asked if we’d like any drinks or popcorn because, unknowing to me until that point, you don’t get a drink with your ticket.  Of course this isn’t typical for your average cinema outing, but considering my next nearest cinemas, VUE and my local independent cinema, both offer cheaper tickets and a complimentary hot drink for the parent (£4.99 and £5 respectively), and Empire do offer a Seniors discount ticket price complete with a free drink, I thought this was a pretty raw deal for parents from Empire. The parent and baby showing was in screen 5, which is one of the smaller sized 2D auditoriums.  Compact and cosy, our little cinema was to be our own private viewing as nobody else showed up, so it was the perfect size room for us.  The screen wasn’t one of the wider Impact screens but it was still a generous capacity (and I’ve seen some pretty tiny cinema screens in my time.)

But before I even registered the size of the room or the screen, I noticed how loud the volume was.  It literally was a ‘woah!’ moment, and this is coming from someone who regularly goes to a loud, full band church.  Had I not taken Reuben’s ear defenders in my bag I’m not sure how I’d have felt about taking him in.  It definitely didn’t seem any quieter than usual which I thought was odd. I figured it would be okay to take Reuben in his pushchair seeing as this screening had babies in mind.  There was ample space right at the front of the screen where the disabled seating was situated, which I admit felt wrong doing, like I was parking in a disabled bay without a badge.  But it was obviously okay, so I left it in the middle space just in case anyone else came in.  Reuben’s changing bag is just too heavy for me to carry about so we just left it with the pram down the bottom while we trekked up the stairs to the premier seats at the very back.

So it wasn’t especially convenient having Reuben’s bag all the way down the bottom but I figured you’d be silly not to take up the best seats in the house.  Premier seating has more foot room than the regular seats, which meant it was really good for the space. I was able to dump my big bag beside me on the floor and drape all our coats alongside me.

When the film started I was surprised the lights went down like it always does at the cinema.  So far, with its high volume and now darkness but for the glow of the screen, there wasn’t so much ‘lights up, sound down’ going on.  (All these photos were taken prior to the film starting, so they show lights low while the ads played.) Thankfully, because I’d brought the ear defenders Reuben went off to sleep pretty quickly, so we were able to sit and watch the movie right the way through without him waking.  He woke toward the end but didn’t want a milk until we were getting ready to leave which was just as well really as I wouldn’t have been able to make a milk up during the movie.  The same went for changing his nappy.  Unless I was looking in the wrong places, the only changing facility was the drop down change table that I found in the disabled toilet.

The actual movie was really good!  The Man Who Invented Christmas is the cosy festive treat I was hoping it would be, and it was probably even better than I imagined it to be.  And the fact we were able to watch it the whole way through without any distraction was just perfect.  It was nice for Reuben to experience the parts of it he did, such as the beginning and the end, but it was enough for him, and it gave us as a couple the chance to do something that we both enjoy without feeling restricted.  I can imagine if we’d gone to any other screening, it would have been noisier and much less comfortable in the way we could relax and know our pushchair was safe.

Empire’s Parent and Baby screening is a brilliant service for us parents where we’d otherwise feel a bit put off from a regular showing, but I do feel there’s room for improvement.  I genuinely questioned whether we were in the right screen, because there was nothing to say it was baby friendly.  To make it a more comfortable experience, I’d keep the lights on at the level they’re at during the adverts, and I’d soften the volume a touch.  It would also be a good idea to provide complimentary refreshments too, to make it in line with what other cinemas offer and be better value for money. What I like about Empire’s offering is that what you get is top quality: the latest movies on the best screens with quality picture and sound.  I also like the fact my cinema is still only new so it’s bright and shiny and feels like you’re going for a treat.  While I’ll most certainly continue going to Empire cinema and recommend it to my fellow parent friends, I’d suggest to go along bearing the sound and light in mind – and of course, that niggling lack of tea.

Have you ever been to a parent and baby cinema showing?  Have you thought about going to one but not sure what to expect?  Or do you think a regular screening provides all you need from a cinema visit?  I’d love to hear your thoughts in the comments below.