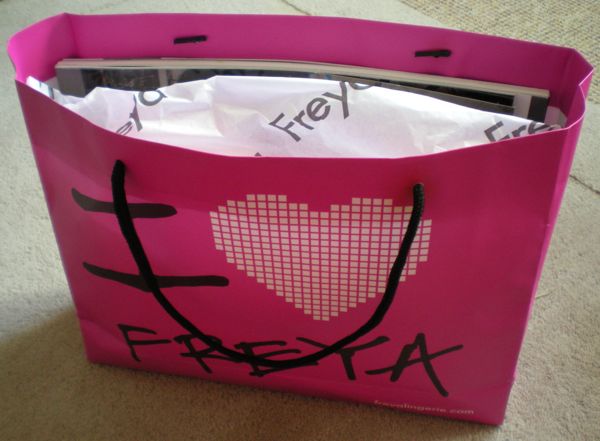 At the beginning of the month I spoke about some of my favourite new bras of the season.  Spring arrives and it makes you want to overhaul your dank winter wardrobe with some really fresh and pretty clothing, and your lingerie is no exception.

I love my lingerie to be colourful at the best of times anyway.  Beyond the need for white and black bras, and maybe a nude one for conspicuous clothing, I don’t see much of a point for it.  That doesn’t mean any coloured bra makes me weak at the knees though.  But one certain bra recently did exactly that to me.  And that was the Ashlee by Freya.
I was giddy like a child overdosed on Swizzles when a little package arrived containing the Ashlee bra.  I cooed over it just via the internet so to see and feel the real thing was a dream.  To say Ashlee’s a gorgeous bra doesn’t half describe it!
The Ashlee is actually conceived by the same concept that is the best selling Deco bra, which is renowned for giving a fantastic cleavage.  This time round the beauty that is Ashlee has been given a truly prettifying makeover, in every way possible.
The fabric of the Ashlee is a polyester mix that gives the touch similar to microfibre; it feels soft and silky, a pleasurable feel on the skin.  The cups are fully moulded (meaning they are lightly padded) for a smoothing t-shirt effect making it a really good option for a seam-free finish under clothing.  I love the fact that it doesn’t show ugly pattern imprint from beneath my t shirts, because that is one way to spoil the look of what you’re wearing.
The cups are edged with a silky cream ribbon with a dainty embroidered picot trim and cute bows to the centre gore and the front of the straps, which aren’t ridiculously wide and frumpy.
The colour is called Sorbet and reminds me of bonbons, or strawberry milkshake topped with cream.  It looks mouth wateringly delectable, reminiscent of childhood ice creams in summer.  This is one yummy looking bra!
Being a bigger cupped girl I do struggle to find bras that match up to my taste.  Many people tell me of particular brands that apparently produce in my size.  But I often feel like what I’d really love in a bra rarely gets made, or even to my knowledge.  Freya is a consistently easy to source bra brand and I don’t think I’ve coveted after a bra in such a way for quite a while.
Bras for larger busts are quite often unpadded and predictable lacy numbers so it’s refreshing to see a bra like this one that breaks all the boundaries.  It’s padded, gorgeous and girly and gives a fab cleavage.  I love that it’s so modern and young looking.  I turned 30 this year and thought it was time for me to ‘grow up and act my age’ whatever that meant.  Wearing this bra reminds me of when I used to wear push up bras in my smaller boobed days, and it’s a fun feeling.
This bra in particular is the plunge style, which basically gives a good cleavage like the old ‘hello boys’ effect.  You can get this also in a half cup but it only goes up to an F.  My bra here is a 30GG.  If I had the choice and it was made in a bigger cup I probably would have gone for the half cup, but now I have the plunge I am happy.  The only issue I would say is that the 28″ back only goes up to the G cup, with the smallest back for a GG starting at a 30″.  The 30GG was the best size available to me and did feel big enough though I felt I would have been more confident had it been 28″.  After a good day’s wear I did have a couple of sore marks which were beneath my armpit.  I don’t know if it’s because the 30″ is making the cups move further out than they need to be?
You can also buy matching briefs in a choice of short, thong or high waisted brief, and I have the brief. It’s not usually a style I’d wear but it’s a fantastic fit!  I was surprised by how much I enjoyed it being such a high waisted fashion.  The material is the same soft and slinky feel as the bra so is super comfy.
Overall I love the Ashlee.  It’s modern and pretty, gives a great shape and blends beautifully under tops.  I just need Freya to make the 28″ back available for the next cup up and I’ll be a very happy spring bunny indeed!
This is the video review I made earlier:
Are you a fan of Freya’s new Ashlee?  A loyal Deco wearer wondering what the Ashlee’s like?  Let me know what you think about it.
Becky x