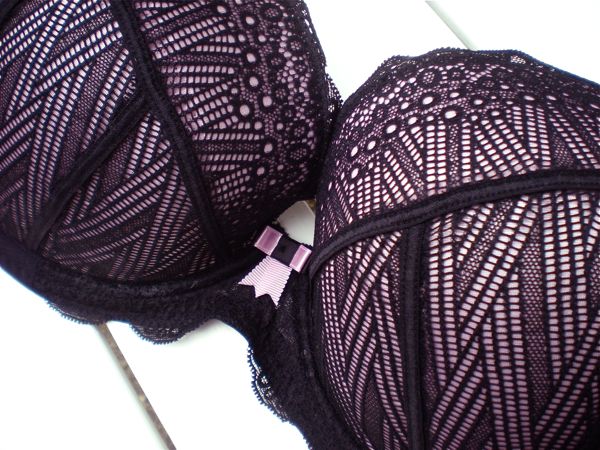 Have you ever lusted after something so badly that when you’ve finally got it you’re overwhelmed by a deflating disappointment?

And all in one moment it comes to you, that the whole time you spent adoring and craving was just a hazy mirage of wishful unreality. Okay, slight drama there, but the truth is I really did hold all expectation on the bra I held high on a pedestal.  Curvy Kate’s hot mama Roxie stole my heart the moment she was released.  And, after months of should I – shouldn’t I (am I too skint?) I finally placed my order for the 30GG beauty of the century.

I fell in love all over again when Roxie arrived.  Flashing her pink bits through her chevron pattern cups.  Her design and cut out detail, reminiscent of the paper cut-out crafty trend, igniting a giddy thrill in me.  So light, softly padded and oh-so plungey. I was so excited to wear Roxie I couldn’t wait to get her on.  The simple, fully adjustable straps I slid into perfect position.  The band, a promising three hooks wide, felt supportive but not tight.  The plunging cups felt tailor made to my shape, and the gore was so unobtrusive it may not have existed.  The Goldilocks in me had it just right. Then I wore Roxie for the day and it all turned a little sour.

During the day I began to feel myself slipping out of Roxie, and I had to scoop myself back in with a bit of jiggling and heaving.  Then I was aware of squeaking – LOTS of squeaking – coming from behind me.  Stuffing the laundry in the washing machine or just sitting on the sofa, however much or little I moved, I squeaked. By the end of the day I was somewhat relieved for the moment of escape, but it appeared my boobs already had that way of thinking before I had chance to throw my t shirt off.  Lo and behold I looked as if I’d been ravaged in a bush and had my bra pulled apart.  The cups had half disappeared into my armpits and I was very much semi exposed.  On further inspection, the cups had in fact stretched, pulling the wires right round my sides.  It was as if the bra refused to be, well, a bra.

Personally I blame the cups.  In fact, what the actual deuce are the wires made from?  Liquorice laces? Yes, on first appearance the bra was light as a feather but this has obviously been due to the strangely soft and pliable wires.  In one respect, more form fitting wires sounds great, as I’m forever having to forcibly bend hard wires round my ribs, but these wires were so soft they were allowing themselves to be pulled half way round my torso.  Not a key attribute I was especially seeking.

And that’s how my love affair with Roxie met with a swift and revealing demise.

I still see her around.  Hanging off backs of chairs.  Teasing me with her cheeky chevrons.  Whether I’d go back there would hugely depend on her changing her ways.  Those oh-so hay-wire ways.

Have you had a similar or even better experience with Roxie?

I’d love to hear your fit stories regarding Curvy Kate.

Leave a Reply to Talia Cancel