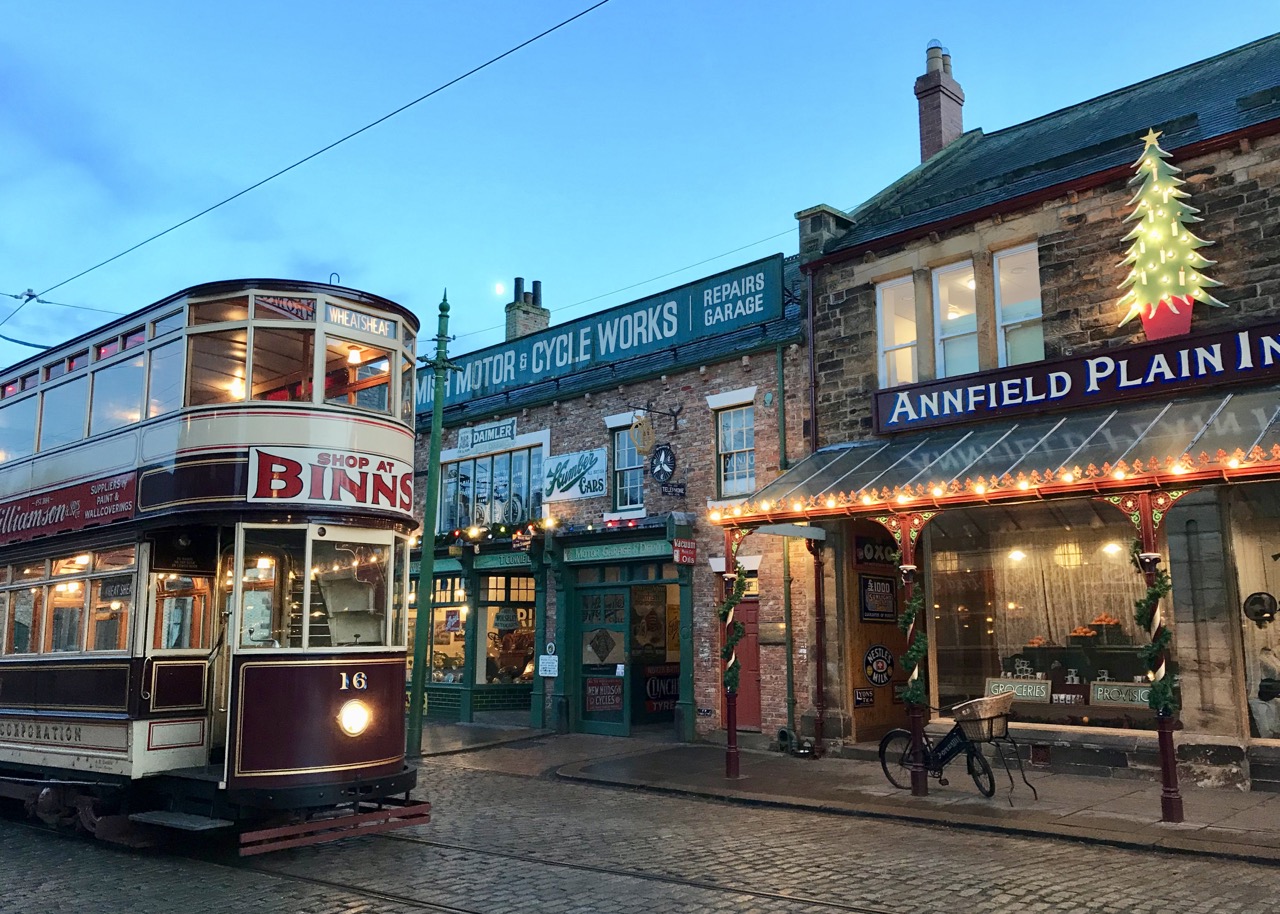 Following a family shared bout of illness mid December, this past week has been spent making up for lost festive time and getting into the Christmas spirit. One family day out that we were looking forward to experiencing was Beamish at Christmastime.

[DISCLOSURE: THIS DAY VISIT WAS PR GIFTED. ALL OPINIONS AND IMAGES ARE MY OWN.]

The Santa parade that launched Beamish’s festive season was a massively popular event back in November, so we were keen to visit on a regular December week day once advent had begun its countdown, and experience Christmas in a time gone by. We had to postpone the date we initially planned because sickness bugs like to spoil Christmas plans, but as soon as we were fit and well we made it top of the agenda.

It was almost a straight week before Christmas when we headed up to Beamish. I’d anticipated hoards of visitors like the scenes at the opening parade, where cars were abandoned at road sides because the car park was so packed, and especially with it now being so close to Christmas. Thankfully it was probably a little too early for the schools to be finishing for the term, so luckily for us it was just a quiet old Monday.

Beamish is open to visitors throughout December up to Christmas Eve (running separate ticketed evenings which sell out quickly), it just closes an hour earlier than usual, at 4pm. We found this still allowed us plenty time to do what we wanted to do, even arriving shortly before midday. As we’d missed some of the parts of the museum on our last visit, we made sure to see them this time. And it all fitted in rather well, since it was the 1820’s Pockerley we wanted to see, and Santa’s reindeer (and Santa himself) was over that neck of the woods too.

This time we decided to leave the pushchair in the car in favour of Reuben walking as much as possible on his reins. While you can take a buggy on the trams, I recalled it was a hassle collapsing a bulky travel system down – there was no way I could tolerate that again and besides, Reuben enjoyed exploring by foot last time anyway.

Our first port of call was to see Santa’s reindeer so we hopped onto a tram which was ready waiting and headed up to Pockerley. Walking through the gated entrance, it was clear we’d arrived at a magical place, as all of sudden the whole area had been dusted with a soft sprinkling of snow (of the faux kind, obviously.) But it was incredibly muddy. I lost count the amount of times Reuben tripped over and muddied his snowsuit, in turn totally dirtying my terrible choice of coat in a delightful smattering of boot dirt.

An illuminated fir tree signposted the vicinity of Santa’s grotto’s building, close to the Waggonway gate. We didn’t visit Santa (tickets were £5 purchased at the main desk which Reuben didn’t get), but it was lovely to see Santa’s reindeer in possibly the best, most natural set up reindeer should be seen in, beneath a canopy of trees and with a shed to shelter. The reindeer seemed to enjoy the company of visitors too, which pleased Reuben who waved through the fence at a particularly inquisitive reindeer.

With the Waggonway just around the corner we headed toward an industrial old steam engine which was gearing up for a journey. We boarded one of the carriages right behind the locomotive so Reuben could watch the mechanics and the steam, and when it started to go, the thick smoke. It was the briefest of journeys though, only meandering along as far as we could see the church, before reversing back up to the platform. The drivers were all very chatty and engaging, which is great fun to play along with in character.

So we explored Pockerley for a while, finally getting chance to go inside Joe the Quilter’s Cottage, where a Beamish guide dressed in typical 1800s gear talked us through the infamous history of the quaint building. St. Helens church which came just over the way from Middlesbrough was so intriguing to see. Only a petite church but felt perfectly like it had always been there.

Realising we’d long passed lunchtime and Reuben was overly engaged in his snack supply, we were in need of something warm to eat and somewhere warm to eat it in. Remembering the old fashioned chippy in the Pit Village, we walked back up to the tramway and caught a tram, before jumping off midway to walk a quicker route cutting through the wood behind the fish shop. There was a long queue by the time we reached it, but we weren’t waiting all that long. Our fish and chips, cooked the traditional way in beef fat, were freshly cooked and tasted absolutely amazing, and in no time at all our feet and fingers were warmed back up.

Seeing the town was a highlight I was putting off until pretty much last because I knew it would look magical lit up. It wasn’t yet dark, so we had time to wander around. A horse and cart crossed over the road to the stables behind the shops, and Reuben followed suit. He loves seeing animals, and of course the carts satisfied Reuben’s admiration of wheels.

We popped round the back of the sweet shop where a sweet maker was just finishing making a batch of confectionary. I tried one – a pear drop! Then before we knew it, we were in the sweet shop buying Reuben some chocolate raisins. A combination of his favourite snacks and treats which made me feel better about allowing him to devour so much chocolate in one (contented) sitting.

The Bazaar – just a few stalls selling small toys, chocolate and gifts – was in situ around the band stand. Reuben and his Dad looked at the little spinning tops, while I enjoyed a nosy through the gifts, eying up a retro styled Christmas mug which strangely cost £3 dearer here than the gift shop. And we bought more chocolate – a frog and a santa lolly – and left to see the fairground.

The fairground area was snow frosted like the Christmassy Pockerley. It looked pretty against the December mist; the warm incandescence of the carousel and the glow of the fairy lit trees. We watched a few families take to the ice rink, adults cautiously skating with little ones in hand.

By this time the mist was rising across the field behind the fair as the day dimmed. We’d brought a flask of hot chocolate with us which we hadn’t opened yet, so finding a picnic bench it was the perfect time for a winter warmer. We were all snuggled up in a coats and woolies, our noses pink from the chilly air and we were laughing. In that moment I just felt so Christmassy.

By the time we’d walked back up to the town, dusk had arrived and the town took on a whole new festive face. Few people were about as they were already huddled up in the last tram, so we snapped a few more pictures for the album before heading off. Reuben was dozy sat upon my lap on the tram. This time he didn’t “ooh” and “ahh”, there was no climbing up to look out of the window. Reuben was exhausted. We had the best festive day.

Where’s your favourite place to go for a festive family day out?