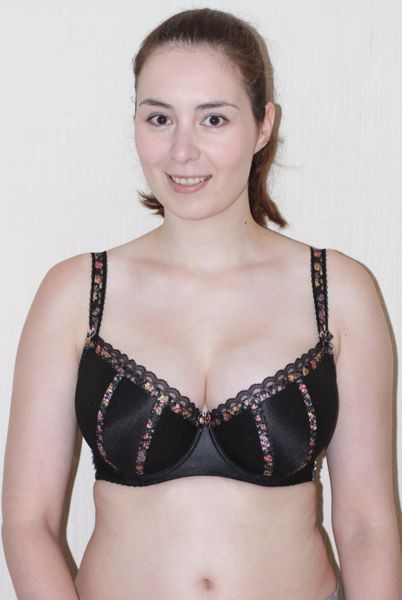 A little while ago I received a few bras from Polish lingerie brand, Ewa Michalak.  I’d experienced a few problems with ordering my corresponding size because of the european sizing differences but I’m happy to say that since returning my first order, I now have replacements to try.

Being between sizes, it was a confusing job for me deciding whether to order sizes to a 28GG, 30GG or 28H.  The brand being european also meant that sizes are not the same as UK inch bands, calculated in centimetres instead.  Then I’d read about some Ewa Michalak customers recommending to order the next size up from your usual size, so I had a lot to consider.

At the time of my first order I went for what I considered a straight conversion at 65GG, 30GG being my mid size.  As I wear 28 backs often, I expected the 30 to make up for the difference but it didn’t work out as I’d thought it would.  Really, because inches and centimetres do not convert precisely, it would have been wiser to jump straight to the 70 back; marked as an equivalent of a 32 back on the Ewa Michalak website.

The first bra I reviewed was the sultry HP Nina, a sexy half cup bra trimmed with a feminine floral ribbon detail in a 65GG (30GG).  It was a relatively good fit but I felt it was just too tight and a little inadequate in the cup.

I exchanged it for a 70H (32H) hoping for a more comfortable band and more roomy cups.

When I opened up the package I knew instantly the 70H would be too big.  The cups looked enormous, even bigger compared to other bras in the box of the same size.  The straps were a bit fiddly to adjust (I had to ask my OH in the end to adjust it for me) but once fitted and fastened up on the first hooks, my boobs were quite swamped with a lot of cup space unfilled.  Compared against the photo above, you can see just how much bigger this one is.

The back was a really good fit, so the 70 (32) was the perfect band for me.  I know that if I remained with the GG cups then it would have been the perfect fit.  When I estimated my next size up from the tight 65GG, I admit I was a little too adventurous with going up in the band and in the cups.  So, in the HP Nina, a 70GG (32GG) is the best size to go for, when compared to my average 30GG UK size.

What I like about the HP Nina is that it’s a more flexible design being the half cup compared to a full balcony which I don’t always suit.  It provides excellent, reliable coverage whilst supporting a good degree of bust shelf.  It’s very flattering if you’re after a good, rounded shape with a flash of cleavage, and it’s not too dressy to get away with wearing everyday.  HP Nina is a glamorous bra, perfect for fuller busts.

Have you tried the HP Nina?  How did you find the fit and sizing?