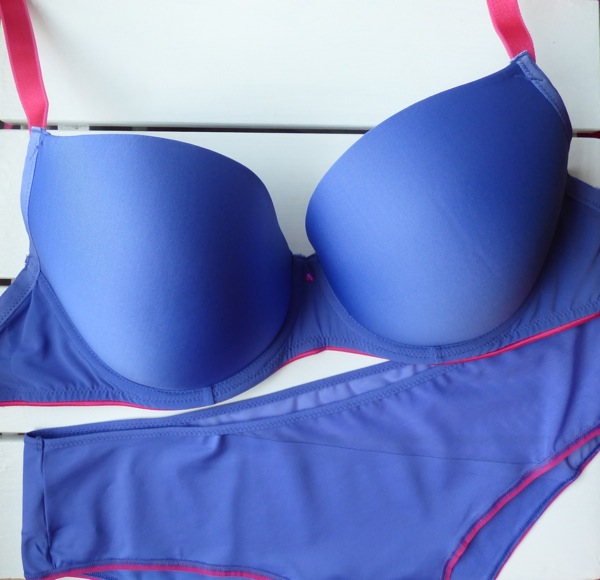 Passionata is a lingerie icon thanks to model, Bar Refaeli, fronting their campaigns for the past five years.  But, since Passionata hit their 25th birthday last year, a new face has assumed the position –  Valérie Van Der Graaf –  bringing a new energy to the bubbly brand.

Passionata‘s SS15 season has been hotly anticipated as the playful ‘Sexy Funfair’ campaign introduces larger cup sizes to select collections for the first time.  For fuller busted Passionata fans longing for the expansion in size range, this is fab news.

Having been told about the impending launch early last year, this season couldn’t have come sooner!  I was really keen to find out how the styles would look, whether they’d fit with the already cutesy aesthetic and even more importantly, how they’d wear.  Although the sizes run to an H, this is actually the French H which translates as a UK FF.  Bearing in mind my experience with big sister brand Chantelle where I found the FF measured up equally to a British G cup, I thought it worth trying out the range before writing off its larger cup credentials. From the lines that run up to a UK FF I was drawn to the Sexy Smooth range; a smooth moulded cup in a choice of t-shirt or strapless bra and in a variety of fun colourways.  I received the lavender 32FF plunging t-shirt bra and hipster brief in a medium.

Moulded bras seem to be having a moment which in part prompted me to check out Passionata’s version of the lingerie staple.  Already it had won me over with its sugary shades, so it’s fit and sizing would be the deciding factor.

The style is plunging without being too low, and features totally seamfree cups for no-show underneath close clothing.  The band finishes with a two hook fastening clasp that is fairly wide and the fully adjustable straps have a soft finish.  The main colour runs from the cups to the entire band, while the straps and underband piping is trimmed with a contrasting colour (in this case a bright bubblegum pink).  A pink shiny decoration finishes off the smooth and uncomplicated design at the centre gore, giving just enough glitz for an added fun and youthful look. Sadly (for me) I did find the bra size ran true.  The 32FF fits as I’d expect it to, which in this case wasn’t in my favour as I was hoping it would run large (more like a G cup).  Good for sizing sake, not good when you’re actually a G+ hoping to fit into something smaller.

So while the size is a major downer I still noted what I like (and don’t) about the Sexy Smooth collection on the whole.  Let’s get the biggest frustration out of the way: Passionata, your H cup intentions fall short when the reality is still a sub G range.  Blah.

The colourways in this collection are fantastic; so fun, cheerful and a pleasure to look at.  The smoothness of the fabric is awesome; sleek and t shirt friendly with a shimmery tone that makes it look all the prettier. The brief is super comfy!  The fine gauge fabric just smooths over the skin without any digging, making it an easy to wear, barely there addition to the set.

Overall, the aesthetic is a youthful, colourful look that’s as functional as it is gorgeous.

If I were to make amendments to this style I would broaden the band of the bra.  A narrow band isn’t sufficient for proper support, and it wouldn’t detract from the style if the band was somewhat wider. To end… as a brand I’ve cooed over for too long it’s fantastic to see them expand their size range to cater for larger boobs over a D cup.  All I need now is an extra cup size adding. Come on Passionata, budge it up to a G!

What do you think of Passionata’s new size expansion?

Do you feel the large cup audience is being served?

What about your thoughts on smooth moulded cups – like the trend?