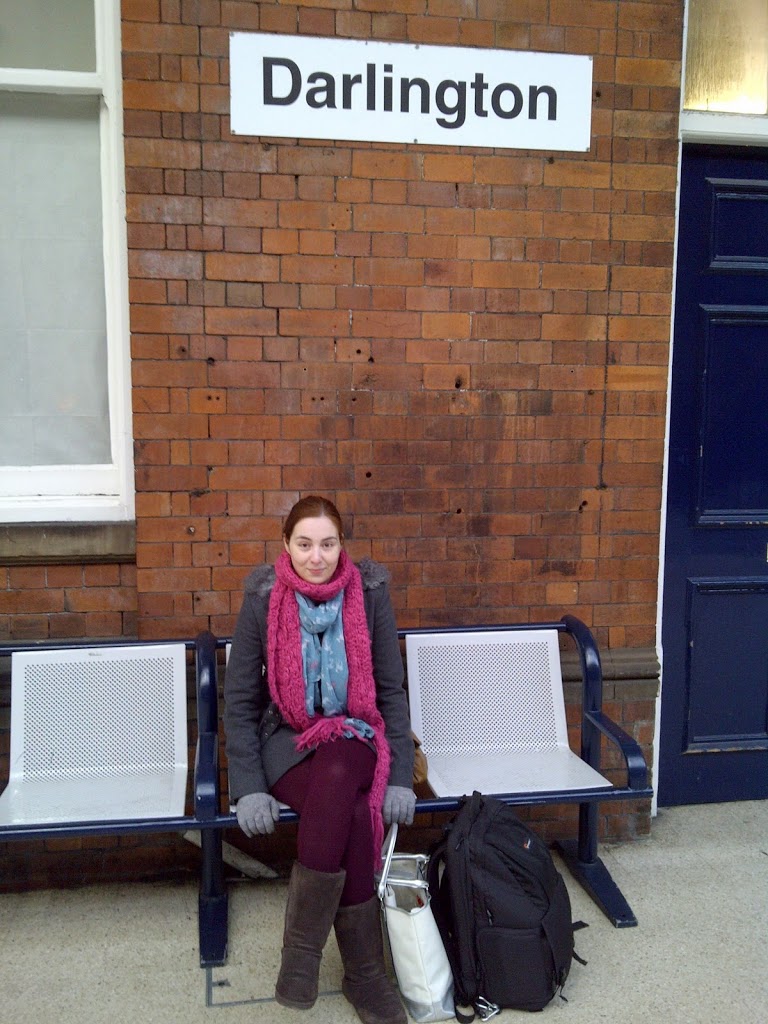 Yesterday I made the excitingly epic journey down to London for a photo shoot with Essentials magazine.

Essentials asked me if I would take part in a fashion shoot for the magazine after I’d emailed them telling them a bit about myself.  Apparently they’re going to do a fashion feature for different body types and they chose me for the hour glass figure.  I was honoured to be asked and very keen to participate so delightedly I said I would.

Both Sean (fiance/photographer) and I booked our tickets to land in at Kings Cross station for noon.  Our train was slightly delayed coming into Darlington and I couldn’t move quick enough when it arrived.  It was bitterly cold sitting on the platform even with all my layers and double scarves!

The journey wasn’t too bad and the three hours passed by relatively quickly with the help of my Grazia mag.  We pulled into Kings Cross just about on time, jumped into a Hackney cab and quickly descended onto the studio in East London where the Essentials team were already conducting the days shoots.

There were four other girls there modelling for the day.  I first tried on a range of outfits that were set aside for me and had quick snaps taken so the fashion team could decide which to go for on me.  The day was slow moving while the assistants and photographer worked through the modelling girls and gradually through the day I had my nails painted, hair styled and make up applied.  It wasn’t until around half past four that my time came and I was kitted out in my freshly steamed clothes.

My first outfit was a fuschia pink peplum dress which looked fantastic on the hanger but at an impossibly small size 8 sample was too small for me.  From what I saw coming off the camera I look stylishly-presentably-hot but what you won’t see is my butt sticking out of the unzipped and pinned up back!  As I’m more used to lingerie shoots, I didn’t give a hoot that my pants were on full display to the room which is a good attitude to adopt in the modelling industry.  You can’t be too precious about modesty!

On the plus side my hair had been amazingly blowdried and back combed so it had oomph and sex appeal and I loved the floral shoes.  I don’t remember who made them and now I wish I took a photo of them.

My second outfit I admit not falling in love with.  In all honesty, I would say the skirt, cami and jacket combo was on the frumpy side.  I’m going to be a thirty year old, not turning 50!  Hopefully the photos will look a lot better than my mind had me thinking.  My hair had been put up with a huge quiff-like bouffant and pinned to the side, so the whole look may be more modern in the finished image, but ‘chav-like’ was what came to me!  It was fun though.

The shoes were orange velveteen heels by Chockers.  They didn’t really feel anything like the floral heels I wore in the first look and the tips looked indented and felt like they were poking my toes.  I won’t be looking for them in the shops when they come out.

By the time my shoot was over it was almost time to leave so I grabbed a bottle of water and had a quick change into my own clothes before saying our quick goodbyes.  Essentials had called a taxi to take us back to the station where we literally ran with our tickets onto our platform 2 Darlington bound train.  Despite my worry that I wouldn’t have time to shoot in the end, we’d made it in perfect time.  The train left London at seven on the dot and got back to Darlington by half nine.

It had been an eventful day, very productive but it was satisfying to return home.  A long shower and scrub up, relax in front of the tv with a bit of food then bed.  Sleep o’clock it was!