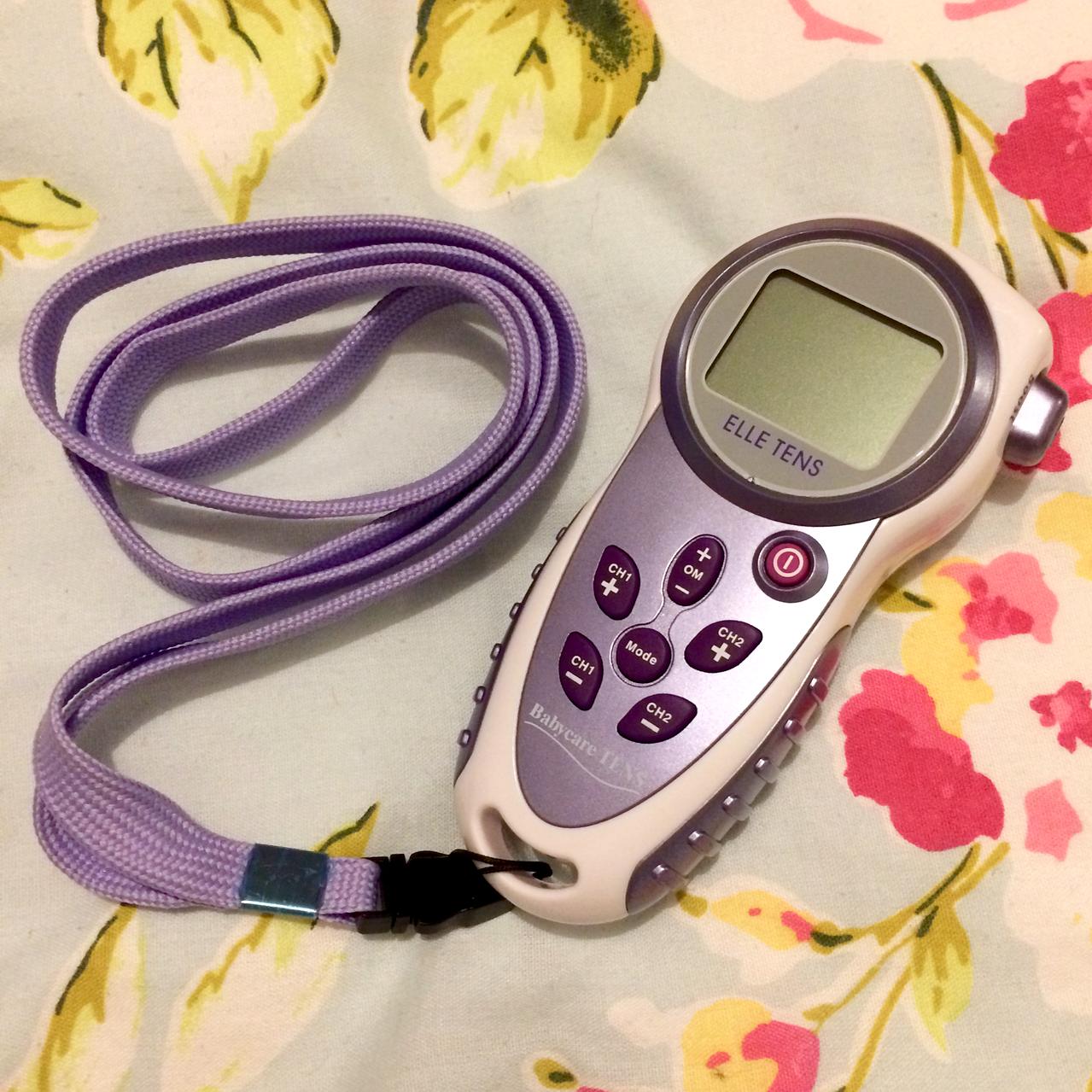 Pain control is one of the biggest concerns of any birth plan.  This was most certainly true for me, when throughout my own pregnancy I had this huge fear of not being able to cope with the overwhelming pain of childbirth.

My extreme period pain experience, which I used to imagine was like labour, managed to influence me so acutely it put me off having kids for years, and yet here I was approaching the very moment I’d most feared.  There was no getting away from it now, this baby had to come out and I needed to address my labour anxiety once and for all.

I’d long planned on delivering at the midwifery led unit because I was hoping for a water birth, though the downside meant my pain management options were limited, so I wanted to ensure I had a good range of pain relief to see me through from the early stage of labour.

It was perfect timing when Bodyclock approached me and sent out their maternity TENS unit for me to use.  Interestingly Bodyclock specialise in TENS for women with focus on childbirth, period pain and incontinence.  I’d not really considered a TENS machine for my labour but when I looked into it I realised it could prove an important piece of arsenal in my pain killer kit.

The Babycare Elle TENS is Bodyclock’s advanced maternity focussed digital TENS machine (though newer model Elle TENS+ has now been released), which aims to provide a high level of drug-free pain control.  This modern design handheld device has an LCD screen for ease of use, and features a multitude of settings to suit your needs, offering a wide range of low to high intensity pain control through two channels split off into four self adhesive electrode pads.  The included lanyard means you can conveniently hang the machine around your neck so it’s always to hand.


HOW IT WORKED FOR ME

When my waters spontaneously broke in the morning it took over six hours for contractions to get going, with the surges initially feeling bearably mild.  I’d read that to get the most out of a TENS machine it’s best to start using it from the early outset, so my husband rigged me up to the four electrical leads.  With my TENS within easy reach around my neck and bouncing on my birthing ball I got myself into a calming zone, listening to my chill out labour playlist as I wrote out and read my scripture affirmations.

As the day wore on I began to work through the lower end of the settings; with two modes of frequency to utilise I found mode 1 provided a good steady rhythm, and by clicking on each channel’s (the upper and lower parts of my back) plus and minus buttons I was able to increase the intensity of electrical current as my pain felt stronger.  The clever Optimax feature was invaluable as I could amp up the strength of the pulses on all channels with a touch of the button.  When each contraction grew I had the ability to draw a continuous pumped up level of pulse by tapping on the burst mode (to the side of the machine) for the duration of the surge, and this really helped fight the pain at its peak.

By the time I was 6cm dilated the TENS machine just wasn’t sufficient pain control and I was desperate for something stronger.  I kept the TENS on though as I moved onto the gas and air at the hospital as I felt it still helped with the relief, and was very much a comforting lifeline for me by then.

Much like the entonox the TENS machine never killed the pain entirely, even in the early stage.  The electrical pulses blurred the contraction pain so it didn’t feel as overwhelming but the pain was still present.  Strangely it was more of a distraction that made me feel somewhat in control of my situation, and I think that was just as powerful psychologically as blotting out pain.

I was really impressed with how long the machine was able to run as I was concerned about it draining the batteries if I had it switched on for hours.  I used it continuously for 24hrs before I was administered an epidural, and it never showed any sign of decreased power.

Even though the TENS machine wasn’t a definitive pain killer I still found it essential in controlling the quality of my labour.  There was a brief point when I tried turning it off in the hospital but I quickly realised I still needed it.  It’s easy to become used to a certain level of electrical pulse and think it’s not taking effect when in actual fact it is working, you just need to knock up the intensity to feel the pulse.  As there are many modes on the TENS machine to play with it meant I could switch around and try different intensities and levels to find the right one for each contraction.

While I don’t have experience of any other TENS machine I found the Babycare Elle really easy to use.  Even in the height of my pain I was able to control the machine myself and flicked about with the controls without second thought.  The boost function was an amazing feature to use; it was quick and responsive as soon as I changed up the settings and gave me a great feeling of control over my own labour.  Just having it around my neck was a comfort in itself.

TENS machines aren’t conventional pain relief in the way they work and from talking to some people, the sensations don’t work for everyone.  But if you’re open to a range of different methods of controlling your pain I’d totally recommend you give a TENS machine a try.  For me, it played an important role in my pain control; it didn’t interfere with the gas and air or pethidine, and it made me feel more in control of my body, which in a medically managed delivery, is a precious lifeline.

Do you have any experience with TENS?  Are you intrigued to try a TENS machine?  Maybe you’re wary they’ll work or have you tried one and not liked it?  What are your thoughts on drug-free pain relief in childbirth?  I’d love to hear your labour experiences!

How I Lost 18 Pounds of Baby Weight [Despite My Fibromyalgia]
Having a Baby? Don't forget these 12 Hospital Bag Essentials For Your Stay
SMEAR FEAR: When Pain (And The Fear of It) Stops You From Having A Smear Test
CO-SLEEPING | Why We (Still) Sleep With Our Toddler in the Bed
babies baby babycare babycare tens birth childbirth contractions digital tens machine drug free elle tens expecting health labour labour pain maternity maternity tens mum to be optimax pain control pain management parent pregnancy surges tens tens machine