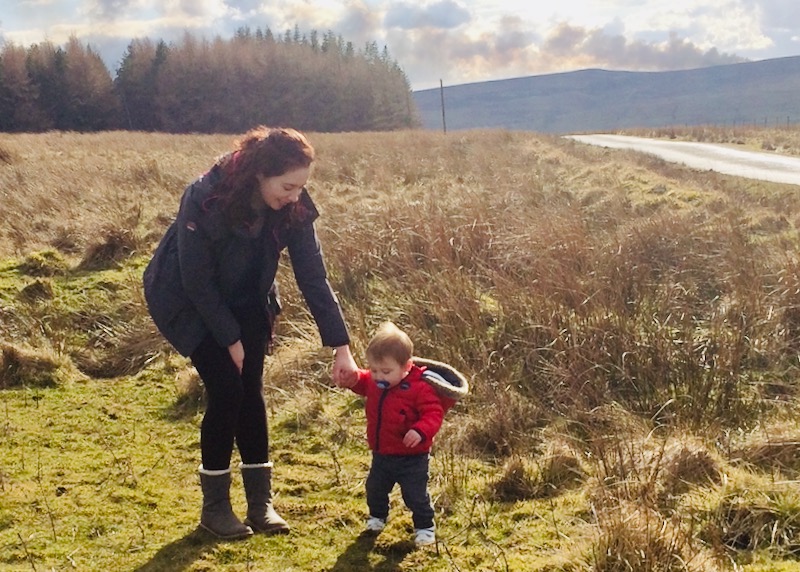 To mark Fibromyalgia Awareness Day (12th May), I’m sharing an insight into my life as a fibro-fighting mum to a four year old, and why I worry I’m not the best example of a great mum.

If I feared anything about becoming a parent, it was how I’d cope with having fibromyalgia. In fact, it was the biggest concern I had on my birth plan, because even before my baby entered the world, fibromyalgia was already dominating my experience of motherhood.

Call it instinct, call it over-caution, I just knew my limitations would impact my role as a mum.

Fibromyalgia — or FMS, or “fibro” — is a neurological condition that I’ve had for over fifteen years now, possibly longer. Chronic pain felt all over my body alongside fatigue, both muscular and mental, plagues me mostly. And being a syndrome means there’s a whole collection of symptoms such as: brain fog, headaches, irritable bowel, muscle weakness, insomnia and sensitivity to pain, that I can put down to the fibro too.

I’ve never really known the cause of my fibromyalgia, I don’t think many people do, but because infection or trauma are thought to be triggers for the onset of the disease, I wonder whether a childhood case of glandular fever or a physical assault I was subjected to in my late teens, were the cause. Whatever the root, all I know is my entire adult life has been spent trying to manage fibromyalgia.

One of the most difficult aspects to managing fibro is knowing your limits and pacing, something I never seem to get right and always overdo it. Obviously being a parent makes it more the task. Juggling lists of things to do while keeping atop the wellbeing of an energetic baby/toddler/child makes it a near impossible task.

If I didn’t have a husband who cared for my needs as well as being a totally present, all-hands-on-deck dad for our son (from the late night baby feeds to the now early pre-schooler mornings) I don’t know how I’d manage to parent. I don’t believe I could. What I do do I struggle with (such as getting little one into the bath) and shouting “dad” is still my go-to SOS signal.

I don’t want to be a part-time parent, or a mum who’s barely present. I want to be as fully a responsible parent to my son as much as my husband is, but are the duties split 50/50? No. And because I “do less” than my husband, I can’t help but feel the sting of inadequacy. I’m a B-grade parent.

This is where fibromyalgia-affected mental health can get a bit ropey. It doesn’t help having a stand alone anxiety disorder (GAD) so when my fibro’s taking a nose dive, depressive low mood slinks its way in.

Being a mum in my best capacity is imperative to me, so the flip side means I berate myself and my abilities because I focus on my shortfall. My insecurities bleed into my limitations, which I take personally as if one is a reflection of the other. Wanting to do so much and not being able to adds a whole new level to mum guilt.

I’m always too tired. I always need to “sleep it off”. I’m always aching; agonised by knees folded on the floor to play legos; jarred by shooting pain in my hips as we walk the school run; struggling to sleep in our already compromised co-sleeping bed because whichever joints I lay on painfully press nerves. It’s always fibro first before parenting.

My life pre-parent meant I could be self centred. I don’t mean I indulged in my suffering, just that self-care came more naturally. I lived with my then long term fiancé, but my time was always my own — no kids depended on me.

Now our boy’s a four year old approaching school I look toward the September landmark with some hopeful optimism. I’ll get a bit more “me time” people tell me. I won’t need to entertain as much. It won’t be pressured any more. But I also dread the day; I don’t want to get rid of my child. And I don’t want to lose him to full days at school with feelings of regret, that I’ve wasted my time with him.

Getting up on an early morning shouldn’t be a write off for me. Playing with my son shouldn’t be weighed up against a cost of “paying for it later”. My child shouldn’t hear “mummy hurts”, “mummy can’t today”. My child doesn’t deserve to lose half his mum to illness he doesn’t understand. I constantly worry that Reuben thinks that his mummy doesn’t want to play with him and that tears me up, as if it’s my preferred choice to sit it out.

That is the reality: time with mum comes with terms and conditions but it’s a contract my son didn’t sign.

Parenting with fibromyalgia basically means a life of delegation and pacing, and trying to not take inability as inadequacy. It’s not that easy, I can tell you.

I hate it when I’m feeling drained of energy and my hips are so sore I’m limping, and Reuben asks to go somewhere. I love our adventure days that take us to the beach, or the park, or the castle in town, so when I just know I’ll struggle with the activity, I disappoint myself as much as my son.

We often need to negotiate plans so I won’t be over exerted. A short wander from the car to somewhere I’ll be able to sit down is more manageable. Sometimes I just can’t go out at all. That’s when Reuben will go out with just dad. Perfect father and son bonding time; Reuben loves hanging out with his dad and vice versa. But to me it’s an adventure without me.

It’s not just about my mobility either, it’s the everyday things that you do without thinking. I need help changing the bed sheets because it’s a big energy drainer. Getting showered can be hard work, and washing my hair is a task I put off as much as I can get away with. Folding the dried laundry is knackering. And by the time we’ve reached the end of the day, whether tea is a quick “bung it in the oven” affair or something more substantial like a dinner with prepared veg hugely depends on how exhausted and in pain I am. You wouldn’t believe how simply standing at the cooker or sink can trigger my sacroiliac pain.

There’s this Spoon Theory — an analogy that’s widely known in the chronic illness community that helps explain the concept that, in a nutshell, when you suffer from chronic illness pain and fatigue you can only do so many things. Once you’ve “used up all your spoons”, your energy’s expended. It’s a good way of describing the reality of fibro life. However, I wouldn’t say it’s as simple as making your spoons count because if every day is different, how do you know how many spoons you have for that day? I have a vague idea what I may or may not be able to manage but it’s not an infallible technique to run your life.

That’s why I find it so difficult to navigate my capabilities for any day. One minute I’m pacing and taking it easy with tasks, the next I’m done-in having done not so much. I just never know where I’m at.

I think there could be good to take with the bad. I may not be able to be the fully capable mum I wish I was, but that’s life, and life is messy. I can only hope that Reuben’s upbringing is teaching him compassion toward others. He is a lovely, considerate boy, maybe he is shaped by this less abled lifestyle after all?

The other day as we were coming away from the supermarket Reuben asked me to run back to the car. Usually I wouldn’t dare because my hips always hurt. But this time I thought, yeah just do it. It was only a few yards away but plenty for me, so I was quite elated about it. I wasn’t the only one. Reuben said: “you did it mummy and you didn’t hurt!” Wow.

Yes, he is affected by my illness but times like this reassure me he’s a champion little four year old who’s taking life in his stride and being a wonderfully caring son too. If that makes me an alright mum, I’ll take that.