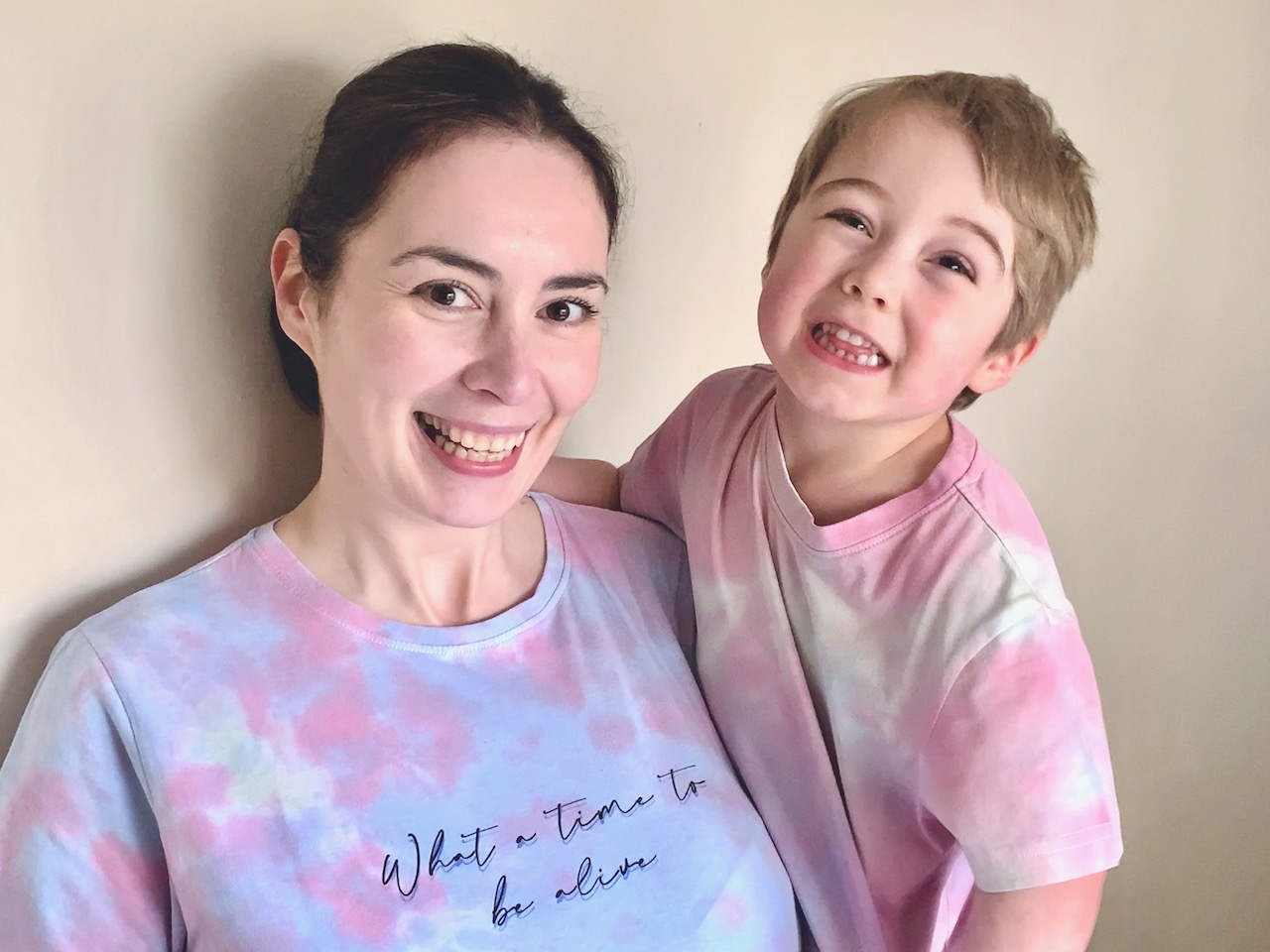 We spent a rainy day thinking about the sunny days to come by tie dying t-shirts. If you want to try this super fun craft too, here’s how the boy and I made our unique and cheerful tees.

Show me someone who doesn’t love a bit of arts and crafts. Okay, putting the glitter and possibly play doh aside! Well crafting is definitely my thing. Immersing myself in something creative is one of my favourite ways to shake off the world, so I love nothing more than spending this kind of quality time crafting with my son.

Obviously not every craft is suitable for a four year old, but even where age appropriation could be a barrier, it is possible to make activities accessible. Take sewing for example. My sharp needles and complicated cross stitching is too advanced for young, new stitchers, but large gauge aida fabric (or binca) and a plastic needle makes my favourite craft a hobby Reuben can join in too. I’ll have to show you that another time.

But today I wanted to share something neither of us had ever tried before – tie dying! I maybe tried it back when I was at school, I certainly don’t remember, so when I decided it would be a cool craft to try with Reuben it was a fresh experience for the both of us.

Our foray into tie dying actually turned into something of an experiment, as we tried using food colouring at first. I wanted to use what we had in the house already and having read about being able to dye with food colouring it sounded perfect. I had food gels in the cupboard from back when I made Reuben’s Hey Duggee rainbow cake, salt in the cupboard and white distilled vinegar borrowed from the husband’s activities with the boy, and I used old hand wash bottles with squirty lids (Lidl sell them like this) to dispense the dye so I didn’t have to buy anything else in.

I’ll jump to the conclusion already – it didn’t work out. Despite squeezing a fair amount of gel colouring into the water it seemed too watery; the colour was so faint and the colouring so diluted it just ran through. By the time our fabric was ready to sit overnight it was already terribly faded. When they came out of the washing machine, the t shirts were totally white again and you’d never have thought they’d been drenched in dye. So I don’t know where I went wrong with this one; maybe I didn’t squeeze enough of the pre-soak vinegar out, or maybe I didn’t salt it properly afterwards. If anyone knows the secret behind dying with food colouring, do throw your ideas this way!

So with our t shirts already pre-washed and ready to go, I set up our dying station. Last time we got away with doing it in the garden but it was raining, so I figured the next best place was the bathroom floor. I opened out a plastic sheet to protect the lino and laid out our t shirts. Then it was a simple case of decanting the dye powders into the plastic bottles and adding water.

Opting for a more subtle style over the typical psychedelic patterned brights, I hoped the dye wouldn’t be too strong, although it looked it in the bottles. Compared to the food colouring dyes we used before, these were super pigmented.

To create a marbled effect we just needed to ruffle up the t shirts a bit, scrunching the fabric and tying up a couple of random knots using elastic bands. There wasn’t much time spent faffing which was just right for the four year old who couldn’t wait to get stuck in.

I wanted to let Reuben do his own thing without much intervention from me so I made sure to ask what he wanted all the way and allowed him to dye as he pleased. He said he wanted to use all three colours (pink, blue and green) which he applied with both precision and enthusiastic gumption!

As a self professed stress head/control freak/perfectionist, I was surprised to find tie dying pretty enjoyable. The method was quite straight forward and didn’t feel too demanding, but I have to give it to Reuben too. His patience and level of understanding helped everything run smoothly and without any bother. He’s definitely matured from the toddler who was so full of energy he’d fly like a tornado though whatever you’d do with him. So well done, Reubs.

As opposed to the little man’s ‘all guns ablazing’ technique, I was decidedly more cautious with my application. I didn’t want to risk the colours spoiling by running into each other so I went for a more sporadic attack. I didn’t mind the white areas showing between, as long as I had a nice smattering of blue and pink I was happy, although I ended up with a bit of green that had made its way over from the dye bombed t shirt next to mine.

The dyes were looking… loud. Oh dear, I thought. It looked like we were getting the jazzy 70s tops after all – Reuben’s especially. He’d squirted that much dye on his t shirt it was sopping wet! But I kept my mouth shut; Reuben was so impressed with his masterpiece that he grabbed my phone, declaring that he was “taking a photo of this” because it was “beautiful”. I love his way with words.

Dye bottles exhausted, it was time to wrap them up into a messy ball and bung them into zip lock freezer bags. After 8 hours sat stewing I took them out and rinsed them through. Not much dye at all came out – they were just as vibrant so things were looking good, despite being a bit too colourful. Thankfully though after a cycle through the washing machine, the finished tops emerged and I was so happy with the result. Both t shirts came out beautifully marbled in soft pastel hues and no muddy colours in sight. So while I was worried he’d potentially wrecked his t shirt, here I am actually jealous how it’s turned out. Bravo to the over zealous technique then!


Reuben loves his tie dye t shirt and asks to wear it often, so I think it’s fair to say he quite liked that craft. Personally I think they’re the most satisfying types of crafts, the ones that you genuinely enjoy and just lose yourself in, with the reward of a finished product. I know I feel good when I’ve completed something I’ve enjoyed (like when I made sea glass necklaces) and I can tell that Reuben has experienced that sense of achievement too. Seeing my little four year old so self assured and good about himself makes me certain this is a fab craft to do with the kids.


What do you think of our results?

What craft activities do you like doing with the kids?

My Mindful Lockdown Hobby: Sea Glass (& How to Find it)
All Aboard the Optimist: A North Yorkshire Moors Railway Heritage Experience
Spooky Sea Fun at Sea Life's Ascarium
Create Your Best Special Occasion - Moonpig style!
activities craft activities crafting crafts things to do things to do with kids tie dying