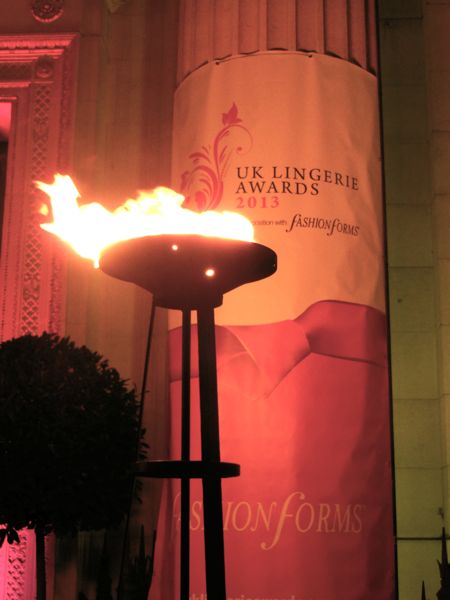 The most glamorous lingerie celebratory event of the calendar finally came to fruition earlier this week on the 4th of December.  Held in the Covent Garden district of London at the prestigious Freemasons’ Hall, Lingerie Insight magazine hosted the industry leading UK Lingerie Awards.  Now in it’s third year, I popped my UKLA cherry attending the evening for the first time!

I was invited to the awards with my partner, Sean, who is editor of CT magazine.  Deciding what to wear was top of my agenda, and I settled on my second outfit purchase – a PU strapless skater dress with a plunging bodice – my best cleavage just for the night!  I wore this with a pair of nude black seamed stockings and stiletto shoe boots, but the star of my outfit clearly became my lace bunny ears! Blazing pillars of fire, spot lights and a hot pink carpet led the way into the stunning building, where we were met by press photographers poised waiting to snap pictures of the attending celebrities and famous names. We took the staircase to the upstairs foyer where guests gathered to mingle over drinks and nibbles, while a live band provided contemporary entertainment.  The Aura Mayfair nightclub hosted a pop up bar where mixologists offered three tantalising cocktails named specially for the night.  Knickers in a Twist was my favourite tipple, which was a raspberry flavoured vodka drink.  They didn’t appear very alcoholic though so after a few of these for pleasures sake I moved on to the traditional drinks table where waiters served glasses of white and red wine and lager.  Much to the delight of the other half, there were his go-to drink: bottles of Becks.  I quaffed the white wine. Whilst everyone acquainted, hospitality staff circulated with platters of tempting canapes and appetisers.  The aubergine and cheese bake dishes were mouthwateringly tasty!  The mini lobster burgers on the other hand weren’t quite as pleasant (expecting a bite size beef burger but discovering a crustacean wasn’t the nicest of surprises.) The photobooth sponsored by Leg Avenue proved to be a popular attraction, especially as guests relaxed (most likely a few drinks down), donning the various head gear and accessories and posing for goofy shots.  A few of us lingerie bloggers piled into the photobooth for a silly bunch of snaps, and the other half and I had a more demure photo session (not likely!)… Halfway through the evening we were asked to take a seat in the theatre style main hall – a room so magnificent our drinks were left at the doors! Even though I wasn’t personally up for an award, it was an exciting feeling sharing the suspense of the moment with the nominations.  I was genuinely so happy to see some of my favourite brands win their categories.  These are some of the winners:

Following the awards the drinks and mingling continued, where I got the chance to congratulate some of the winners including the amazingly talented designer behind Maison Close.  (I’ll be bringing a beautiful Maison Close garment to the blog shortly.)

It was also lovely to meet up with fellow bloggers who I’d not had the chance to before then, including Cheryl from Invest In Your Chest and the new lingerie ladies on the bra block: Big Cup Lil Cup.  Take a gander at my shameless celeb stalking, some faces you may recognise…

I didn’t make the after party at Aura Mayfair (my feet had decided they’d had enough) and so the other half and I scarpered into the night back to our lovely hotel room at Ambassadors Bloomsbury in the most ridiculously expensive rickshaw ride ever.  (Boris Johnson, get them off the road or licensed already!)
But, all in all, a brilliant night was had.  Maybe next time I’ll remember to take a pair of flat pumps for dancing the night away in… see you in 2014?