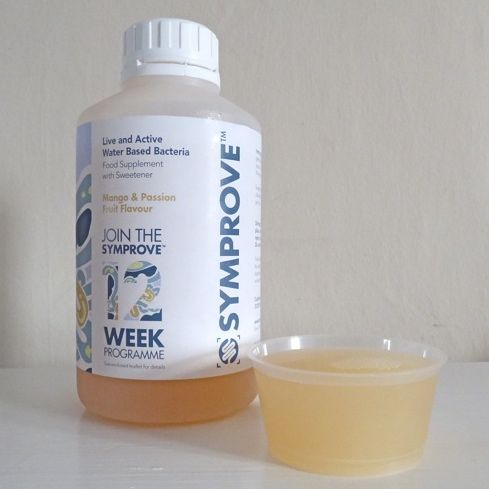 12 Weeks To Symprove my IBS

IBS is a pain in the butt, so when I was asked to trial a product that could possibly cure my irritable bowel syndrome I jumped at the chance.  Having tried medications and self help that made no difference I was a little skeptical, but the daily drain of my symptoms proved anything was worth a shot.

I’d never heard of Symprove so I googled it as much as I could to find out what people were saying about it.  Though there wasn’t a lot out there, what there was seemed to be intriguingly positive, with clinical and media reports declaring that Symprove was the best probiotic on the market.

Unlike most probiotic supplements, Symprove is a live, dairy-free and gluten-free barley based drink.  Its formula is said to be a more efficient way of delivering the billions of gut-friendly bacteria because it passes through the stomach without triggering the digestive system, which is where conventional probiotics fail.

So, every morning, for the next 12 weeks, I’d pour myself a measure of Symprove, allowing it to do its stuff ten minutes before my coffee and toast.  The taste was strange, and something I’d grow to tire of.  In a mango and passionfruit flavour, I likened it to gone off apple juice: very acidic and a little sour.  Not the juiciest of tastes but it was a health supplement after all.

The first 6 weeks formed a cycle pattern of typical IBS symptoms.  One week I’d experience a lot of gas, the next, I’d have an upset stomach.

Week 1 began with an awakening of my digestive system resulting with an extremely gassy tummy; not the trapped kind but a musical display!  It was comical to say the least.

Week 2 arrived and now my tummy was feeling upset and acidic.  I felt like I’d drank a gallon of fizzy pop and eaten a ton of pickles.  My stomach was knotted and griping.

Week 3 saw the acid attack peak, and it left me feeling overwhelmed with discomfort.  The acidity I’d been feeling developed into acid reflux; my chest and throat hurt.  I felt (and was physically) sick.  I was at my worst and longed for the acidity to neutralise.

Week 4 offered some relief and I saw an end to the acid pains.  But while my intestines appeared to have calmed down my bowels had now turned sluggish.  I was now struggling with constipation, with episodes of sudden urgency out of the blue which was an old, acute symptom of mine I’d hoped to see the back of.  At this point I felt disheartened that I wouldn’t see an end to the vicious symptoms.

Week 5 began a 3 week run of awful constipation, major belly bloating with a lot of gas production.  Thankfully (but awkwardly in some inconvenient places) it often released and wasn’t a trapped problem, although I was hounded by a massively swollen belly that made me look 4 months pregnant.  I felt inflated and completely balloon-like.

After week 5 I began to lose track of the weeks, which in a way proved something was working.  The symptoms I was going through eventually tailored off and everything quietened down.  One week merged into the next as I moved into a less erratic period.

Since ending the trial I wouldn’t say I’m cured, but I am convinced my IBS has stepped down a notch.  My episodes of gut upset which would have me dashing to the nearest toilet have lessened and my bowel habits are a little more routine and predictable now.  I’m still plagued by the dreaded bloated belly and feel ill at certain times, but I’m definitely improved to a degree.

The downside?  The cost: Symprove is not cheap.  At almost £22 a bottle it’s an expensive leap of faith.

I also found 12 bottles for the 12 weeks was inaccurate and consequently too much.  One 500ml bottle allocated per week actually contains an extra day’s dose.  Every week I was going over a day so by the time the period ended I’d only used 11 of the 12 bottles.  If you’d bought 12 bottles for the 12 weeks you’d actually have a bottle and a half left over – £21.95 you needn’t have spent.

Symprove is a costly supplement when compared to the usual methods we see on the supermarket shelf, but it would be unfair to draw comparisons.  Symprove has worked for too many people to discredit, and my own improvement from a life hindering condition tells me it’s a worthy investment.