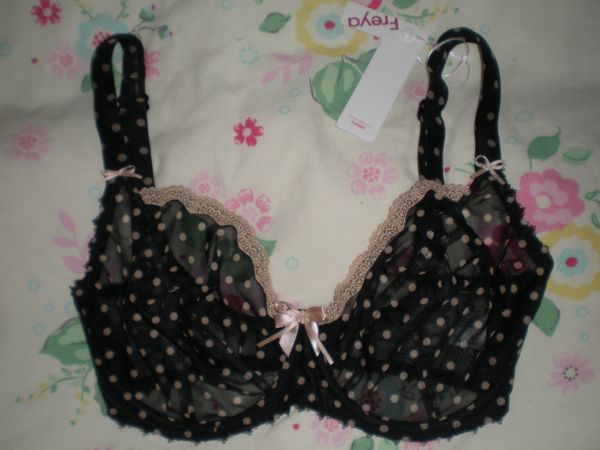 Thanks to Lingerie Heaven, this week I received Freya‘s new AW12 Patsy balcony bra in the black and gold colourway.  Last season saw the first Patsy when it was released in the lime green and as much as I was really attracted to the design I didn’t get around to trying the bra out.  So I’m extremely thankful and excited to have this opportunity to see Patsy for real!


I tried Patsy on literally the moment after it arrived.  Before even putting the bra on I could tell it was a beauty; a polka dot pretty fit for a 50s pin up.  Although wholly mesh fabricated, it’s not totally sheer, and really rather a demure, classy yet modern design.  If you’re soft for vintage inspired looks Patsy will  be right up your street.  The gold spots and detailing works well against the black base.  I love the centre bows! I know I’ve been lacking in the video production department, to be honest I’m not the most verbally eloquent of people and find it much easier speaking by the written word, but I was so keen to share my thoughts on this one and felt the best way of conveying such would be by recording it.  Hopefully you’ll get what I’m trying to address and see that I’m just a mad bra obsessive with some helpful bits of info.  Let me know what you think of the vid!


Anyway, I was sent the 28GG which is pretty much my ‘usual’ bra size if ever I had just one.  I was pleased to find that the band fitted perfectly, it felt firm but not too tight.  The cups felt comfortable.  If Patsy made an H cup I may have tried it to see if it gave me slightly more room as especially on one side there was a slight bulging.  It didn’t come to anything during the day’s wear though so I’m not hugely concerned about it.   Often I find under wires dig in under my arms but I didn’t particularly experience any discomfort during the day wearing the bra.  I would rather the centre gore fitted either a bit higher but preferably lower like a plunge as my boobs don’t allow much space for the middle of a bra.  A major downer which limits what styles I can wear. Now, the straps on this one are possibly their downfall.  I do prefer, on the whole, straps that are fully adjustable and stretchy all around but these are the first straps I’ve seen with so much stretch.  They are super stretchy and I can pull them away from my shoulders a mile off, and that’s with the adjustment already made.  I didn’t want to adjust the straps too much for fear of subjecting my shoulders to angry red marks, or worse, snapping the straps!  So with the adjusters almost to the tops of my shoulders, I felt the support was fairly okay but still allowed an immense amount of bounce.  Not very good for the ample bosom.

The second issue, admittedly not as crucial to the bra’s support design but still possibly bothersome, is that the shape isn’t exactly rounded but gives a fairly pointed silhouette.  I much prefer a round curvature of my bust line as opposed to triangles, but I guess considering the retro look of Patsy, it shouldn’t be surprising that the pointy effect is also very 50s! I’m not planning on running a half marathon (unless you include whipping round the shopping centre before the parking meter runs out, in which case I should probably opt for the Freya Active), and I can most likely live with a less than round boob shape.  If it’s all about aesthetics – and this bra most certainly is a cute little minx – and good band support, then Patsy with her golden glints is sure to pick you up this Autumn.

Freya Patsy is available to buy right now in the plunge and half cup at Lingerie Heaven for only £26.50.

I would love to know what you think of Patsy and her fit.  Have you tried it yourself or been tempted by other gorgeous Autumn bras?