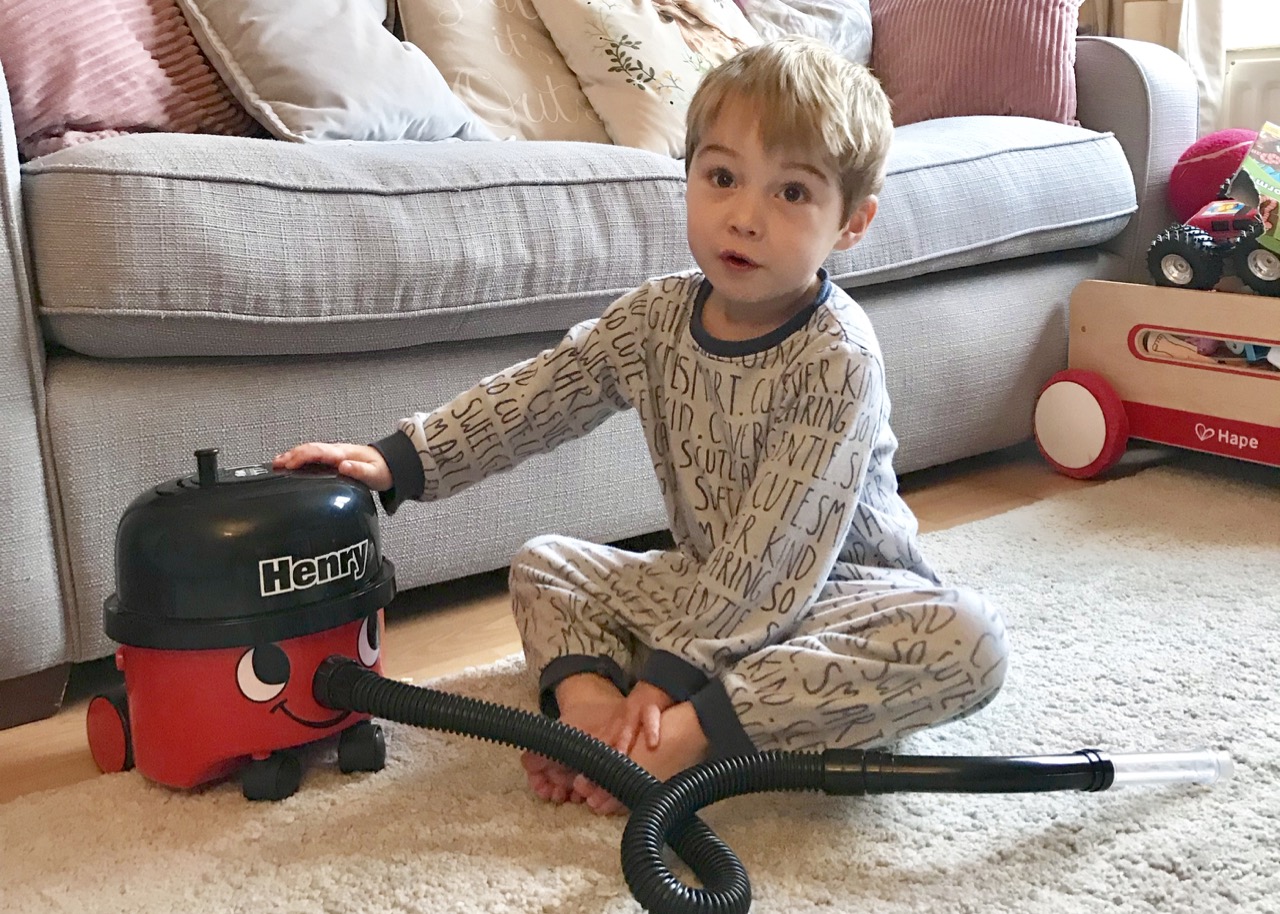 DISCLOSURE: AD / THIS POST CONTAINS GIFTED PRODUCT FROM HELLO BABY DIRECT. ALL IMAGERY, WORDS & OPINION EXPRESSED ARE MY OWN.

Little ones just love to play grown ups. Whether it’s caring for a baby doll or just pushing a mini trolley around the supermarket, kids find copying irresistible. And while you don’t want your child growing up too quickly, role playing is a really healthy way for little ones to learn how their world works. So fun activities doing what mum does is actually an educative activity for toddlers and pre-schoolers to grow their independence, build self esteem and gain new life skills. Clever!

My little one is no stranger to helping around the house. Reuben loves to help out stuffing laundry into the washing machine and then decanting it from the dryer. And he’d mimic my husband vacuuming the house when he was only one. So naturally I knew what he’d absolutely love to call his own – a vacuum cleaner just like mum and dad’s.

Funnily, Reuben used to be afraid of the Numatic Henry. Like, petrified of it. He’d beg me not to get him out of the cupboard and would physically shake in terror if he saw it. But then curiosity got the better of him; Henry was only “coming out to eat his dinner”, I’d say, and from then on Reuben decided he was actually rather okay.

Iconic Henry is hard to dislike, not only is he just the best vacuum cleaner for the job since forever, he’s also pretty cute. I don’t particularly enjoy hoovering but I’m not ashamed to admit my liaisons with Henry make the time pass happier.

The Henry Vacuum Cleaner by toy brand Casdon is a perfect little thing that’s perhaps too cute for its own good. If it weren’t for its pint-sized capacity, this diddy (30cm tall) Henry miniature could pass for the real deal.

In the classic red and black colours and with the very same cheeky characteristics, this solid built Henry looks just the same as his big brother. Just like real Henry, it clips apart and secures the same, has a floor vacuuming wand with attachment heads, runs on casters, and has a carry handle. It also stores a winding cable (which for some reason is white, not black) and has the same power and turbo switches – except they aren’t functional. A single button on the side of the bucket turns Henry on, emitting a toned down version of a vacuum’s whir.

Putting Henry together is a doddle so if you’re thinking of purchasing as a gift you’re not going to be spending half of Christmas Day faffing with a toy hoover. The wand clips together in parts, which can be tricky to twist into place but once you’ve got it right, it stays together.

While there’s the technical difference for safety reasons – it’s battery operated and therefore doesn’t have a pin plug – there’s realistic differences too; it’s light as a feather to pick up as there’s no heavy motor, and there’s no filter or bag in the housing cavity because, hey, it is a toy after all. Rather than a bag, dirt heads straight into a little removable container around the back of Henry.

And it does actually suck dirt up. Not massively, you couldn’t get a child to clean their room with little Henry but he’d give it a good go. Reuben has found that while the floor head doesn’t pick much up, the crevice tool sucks up rice krispies a treat! Real Henry many have a far superior metal wand but little Henry’s transparent tubes makes sucking up those bits so much more satisfying.

Casdon’s Henry is a brilliant role play toy. Yes okay, it doesn’t quite vacuum like it’s bigger brother, but for toddlers playing mini-me with mum (or dad, who to be fair vacuums the most in this house) it’s the next best hoover in the house.

You can purchase the Casdon Henry Vacuum Cleaner from


How does your little one like to help around the house? Are vacuum cleaners a favourite with your kids?