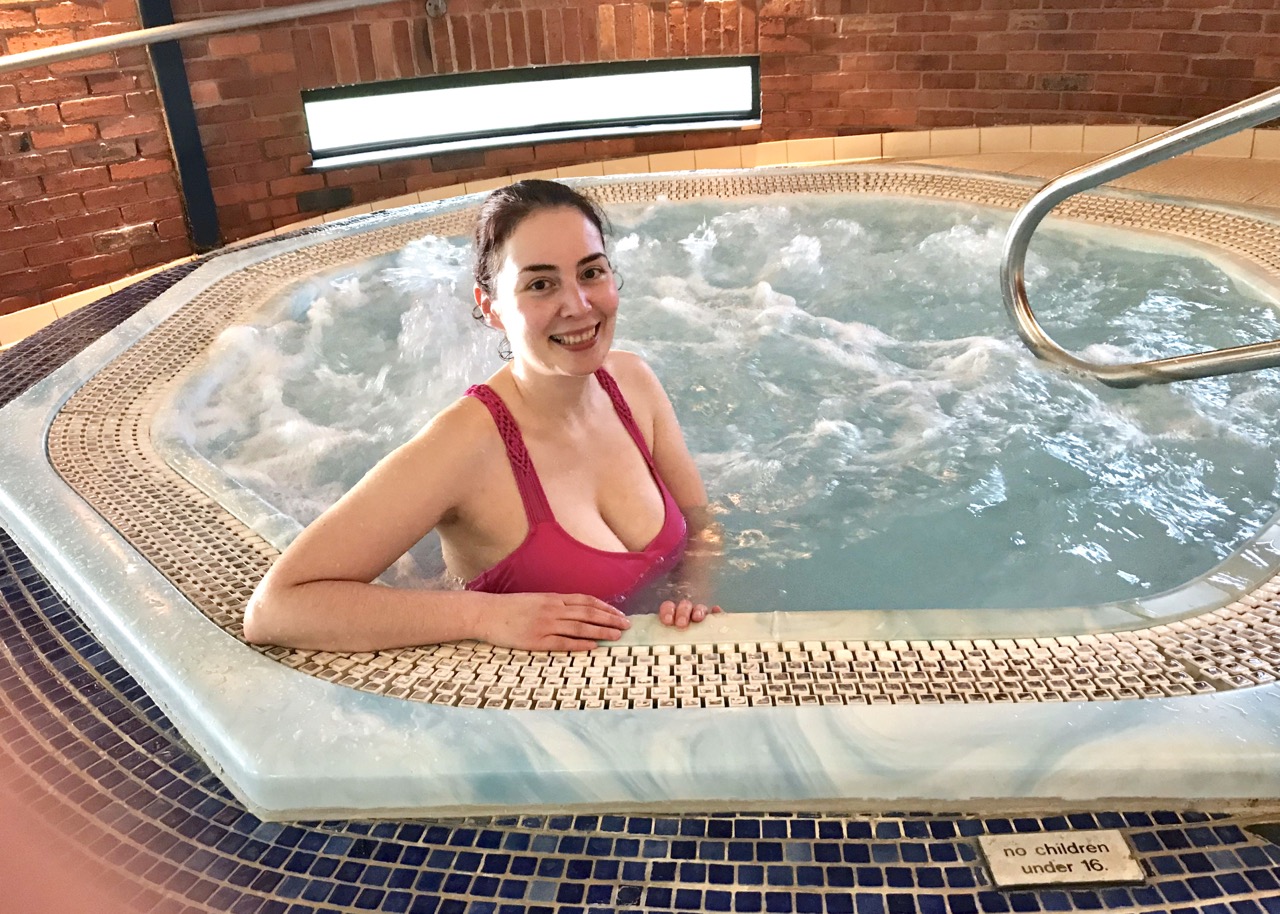 SPA DAY | A Pamper Day for Stressed Out Mamas

Before I became a mum, “me time” was plentiful. I had long hot baths with candles and music. I had pyjama days at my leisure and read magazines with a hot cup of tea. And I had the time to paint my nails for the heck of it and let it dry. Since becoming a mum, “me time” barely has a slot on the timetable and if it does, it’s tagged with a self prescribed guilt-trip.

But that’s what being a mum is all about, isn’t it? Putting yourself aside to raise your offspring. I’m not knocking it, I love it, I really do! But parenting is full on, and if you don’t look after yourself you can end up stressed and a mess.

So, while the idea of a pampering spa day seemed grossly selfish to consider (who am I to abandon my almost two year old?!), I couldn’t deny the lure. The thought of relaxing, not having to worry about changing nappies or sweeping up crunched up cereal in the carpet appealed all the more I thought about it. Heck, I needed it!

You may remember my Christmas gift guide where I included a Red Letter Days spa day for two, listing it as one of my top gifts for stressed out mums. Well I was adamant I’d put it to good use and start the new year off with some much needed TLC and booked a date for my sister and me.

The Pamper Treat for Two spa gift was to be redeemed at one of the Q Hotel chains, the closest venue to me being the Aldwark Manor Hotel near York. It looked quite prestigious from their website, and glancing over their spa facilities, promised a luxurious pampering treat.

Booking was easy, though granted, Mr C phoned on my behalf because I’m silly with phones like that. I would’ve liked to have booked online but nevertheless, it wasn’t a problem getting a day to suit both me and my sister, and our treatments were slotted in at midday.

I was really looking forward to spending some quality time with sister, who’s a fellow mum of three. On the drive down we chatted and joked, excited for the day ahead, and it was just as well we were in an upbeat mood because for about 20 minutes we found ourselves driving in circles, thinking we’d never find the place! A little more signage to the hotel would have helped, but thankfully we lucked out and found the hotel at last. Exchanging side-eye glances on the approach of the pillared driveway and grand hotel façade, we knew we’d picked a gem.

The spa entrance had an immediate calming effect as we walked in; with candles paving the way down the corridor, the scent of soothing aromatherapy oils warmed the air.

After some initial paperwork where we indicated our lunch options and gave some medical information for the therapists, we were handed our bundles of dressing gowns and slippers (no deposit required) and pointed in the direction of the gender specific changing rooms. Inside we found a communal dressing room, lined with electronically controlled lockers (no need for a pound or trolley token – yay!), a couple of private changing cubicles, toilets and sinks. Around the corner were four separate showers, adjacent to the door just before entering the pool.

Not wanting to subject the room to our lumps, bumps and self consciousness, my sister and I squashed ourselves into one of the cubicles, where we donned the swimsuits and paraded to the pool.

With a high beamed ceiling and intimate design the pool room had an exclusive and plush feel; big enough to accommodate the facilities, including a steam room, sauna and jacuzzi, but not so vast to intimidate. We headed to the jacuzzi first, which was quite hot to begin with but felt dreamy once we’d melted into the bubbles.

I have a slight fear of regular swimming pools so I was wholly relieved to find the pool was one consistent depth that didn’t overwhelm. It was lovely and clean to swim in; not too chlorinated either which felt refreshing.

It wasn’t long before we needed to get out for our treatments, so once dried off and in our gowns we headed back to reception where our two therapists came for us. We asked earlier to have a joint treatment room, so we were taken down the hall into a twin room where our treatment beds were ready.

We both selected the Fit for Business ritual, a premium 50 minute ESPA treatment entailing a back exfoliation, cleanse and purifying mask, followed by a deep back massage and lower leg and foot massage. That hour must have been the most chilled out I’ve been in a long, long time. While I spent the best part trying to guess the piano arranged music which played softly through the ceilings (“I’m sure this is Nigel Hess”. “Is this Avril Levigne?”, I did find myself able to just lay there and enjoy being in the moment. The back therapies were an interesting mix which certainly livened my senses: ranging from revitalising scrubs to slippery aromatic oils and steaming hot rough flannels, you didn’t know what you’d feel next. But it was lovely and very therapeutic. My sister’s back massage was at times too intense, and while I found the exertion on my back often heavy, I did feel it necessary and satisfying. My therapist concentrated on some knots across my shoulders which I was hoping would get pummelled out. It left me fairly sore for a few days after but eventually I recovered and felt much relieved!

After our treatments we headed back to the changing room to get dressed and popped up to the relaxation room before lunch. The relaxation room consisted of a small lounge area at the landing of the staircase, and a further quiet room containing several more beds, each scattered with cushions, for chilling out on. There were magazines to read and also some drinking water to help hydrate post treatment, though I think it would’ve been a nice touch to include some fresh fruit here, as I’ve had in some other spa venues.

Our lunch was being served in the bar so we headed down to find a sophisticated but relaxed brasserie located in the older part of the hotel. Opting for a little table and two armchairs in the corner, we were brought our spa lunches: two black boxes containing a sectioned tray of both our ‘main dish’ and dessert. While the way it was served was rather odd (and possibly a little degrading) , the food itself did look quite tasty and certainly fresh. We had a lemon chicken wrap, cous cous, mixed salad and red pepper houmous, with a serving of fresh fruit and chocolate cake. The cous cous was fairly bland and dry which proved tricky to eat, but the salad was fresh and tasty, as was the houmous and the wrap. I could have personally eaten more, but given it was a light spa lunch, the offering was decent.

After lunch we headed back to the spa for a swim, which we alternated with the jacuzzi. The further we progressed into the afternoon it seemed more people were coming into the pool; some older gentlemen and then some children who were having private swimming lessons. When we decided to go and get changed, we found some parents were waiting with their kids in the changing room. I found it desperately uncomfortable, especially since there were no private cubicles free so my sister and I had to wait around until a room was available to use. I don’t have any problem dressing or undressing around my own family and child, but I don’t find it appropriate to undress in front of someone else’s child, so I wasn’t too happy about this.

Overall, our spa day at Aldwark was a real treat. The facilities were all working on the day, with the water clean and lovely and hot in the jacuzzi. While the spa end of the hotel was fairly modern with a contemporary styling, there were areas of neglect that let its appearance down and made it look a bit tired (quite like I felt on arrival.) Several lockers weren’t working, some with missing doors, and there were unsightly cracks and missing paintwork beside the loungers. Not massively serious issues by any regard but, all the same, flaws that detract from that luxurious spa feel.

Our treatments were top notch though, and leaving our spa day behind, I truly felt like a new person having had such a thorough body detox. At the end of the day, what more could a stressed out mum want?

I’m wearing the Profile by Gottex Java Cross Back and you can find my review right here!